Brave Edenderry students hauled back against the wind 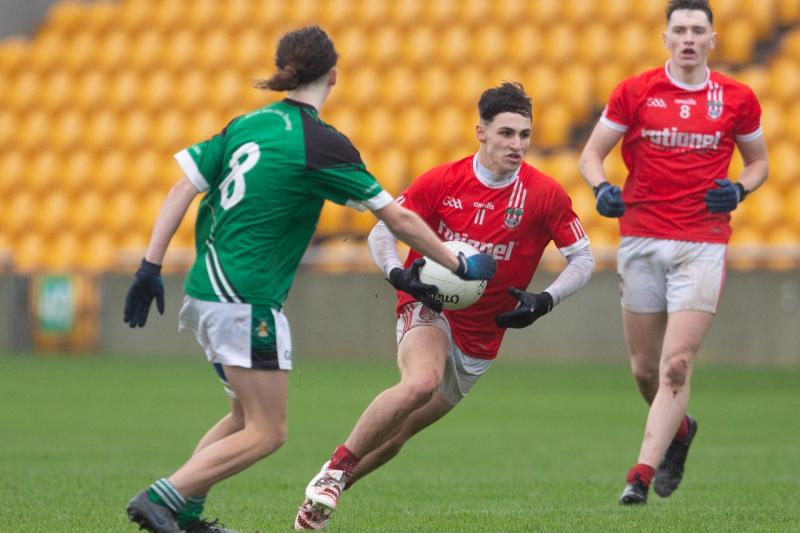 An exemplary performance over the first 40 minutes wasn’t quite enough for St. Mary’s of Edenderry in the first round of the Brother Bosco Cup on Tuesday, as they were reeled in by a wind-assisted Marist College side in a hugely entertaining encounter.

The visitors were simply superb in the opening half in a fixture that promised, and delivered, a contest of real quality. A dozen shots on goal yielded eleven points and in every facet of play, St. Mary’s looked very strong. Defensively they held firm against a very mobile and sharp Marist College attack, they exerted huge pressure on the home side’s kickouts into the wind, and up front their scoring was excellent. Josh O’Donoghue and Páidí Farrell kicked some wonderful points from the corners, Fionn O’Grady offered a solid focal point and target in the full-forward position, while Seán O’Haire’s dead ball striking from distance was immaculate.

After the first four points of the game were shared, St. Mary’s took control of the contest and moved into an 0-8 to 0-2 lead, with the pick of the scores coming from Farrell and O’Donoghue. There was something of a reprieve for St. Mary’s during this time as Senan Baker fired a penalty off the foot of the post for the Marist, having been awarded the opportunity for an off the ball foul on full-forward John Martin.

The water break offered the Marist a chance to reset and they went through a good ten minute spell, kicking two scores and controlling a lot of possession, but the potency of the St. Mary’s attack was clear to see when they exploded into life once again in the closing stages of the half, with O’Haire, O’Grady and O’Donoghue pushing the lead out to seven.

With the wind set to favour the Marist in the second half, controlling possession and working the ball closer into goal was the order of the day for St. Mary’s after half-time and in the opening stages of the half, they did exactly that. While the Athlone students kicked a number of rash wides from distance, there was great control and cohesion about the play of the men in red, who carefully worked the ball up the field to create chances that were converted by O’Donoghue, and the hugely impressive Conor Ennis.

There was always going to be a period of real Marist pressure, however, given the quality of the team that was arguably the most hard done by not to have had a chance to play this competition in 2020/2021. A simple free from Senan Baker got them up and running in the 39th minute and from there they ran riot, racking up four more in as many minutes, all while dominating Eoin Sheehan’s kickout and starving the St. Mary’s attack of any possession.

The game changed utterly when wing back Paddy Higgins pounced on a particularly poor restart from Sheehan and played in Senan Baker, and the Caulry player didn’t miss a beat as he drove through and goal and placed a low shot across the Balyna goalkeeper and into the bottom corner.

St. Mary’s needed to find a way to take the heat out of the game and get a spell of possession, but their midfield was now finding it impossible to win a ball and the pressure mounted. Centre back Tom Mulvihill drove forward to launch another skyscraper over the crossbar from 50 metres out, and Marist then took the lead just before the water break with yet another inspirational score from Senan Baker, who fielded the ball with all the power of his famous father Ollie, and then promptly shaped a kick over the bar from long distance.

When the St. Mary’s attack got some ball to work with, they remained very dangerous. Michael Brady got them back on terms when he burst through two tacklers and blasted the ball over, and while Marist took the lead again, his Edenderry club colleague Mark McCarthy put the sides back on terms with a nice snap shot.

By now however, Marist had all the momentum and they weren’t going to be denied. Tom Mulvihill edged them back in front with another skyscraper of a kick, before Senan Baker delivered the final blow in the form of a second goal, rifled into the roof of the net at the end of a 40 metre run.

It was a spectacular end to a spectacular game, but not the one St. Mary’s would have wanted, as they’ve lost their safety net with just one game to go in their group.

PLAYER OF THE MATCH:

Tom Mulvihill (Marist): Having the wind at your back is one thing, but it’s of little use if you don’t have the ball to work with. Mulvihill did more than any other player to ensure that the Marist monopolised possession in the second half, not to mention driving forward to kick a couple of crucial, inspirational scores at key times.

Senan Baker had a mixed afternoon, striking his penalty off the post and missing a couple of key scoring opportunities in the second half. He never let it affect his game however, and while the entirely logical thing to do when he was charging forward late in the game with his side a point up would have been to clip the ball over the bar and keep the momentum going, he sensed there was more on and drove in to finish off a superb goal.

SCORE OF THE MATCH

When mounting a large comeback, the scores to draw level and to edge in front are crucial, and for Tom Mulvihill and Senan Baker to kick such incredible points in quick succession to make it 1-11 to 0-13 early in the final quarter was hugely significant. Both were incredible points from distance, using the wind but also showcasing the real power and strength of the pair.

Seamus Mulhare had a good game overall and was certainly fit and up with the play throughout, though it was unusual to see a penalty given for an off the ball foul that happened nearly 70 metres away from the play. The fact that it was missed, meant that it wasn’t a key swing moment in the contest however.

There is no real uniformity in what’s happening across the country when it comes to schools football. Leinster is up and running, pretty much as per normal, as is the case in Munster, whereas there are slightly more restrictions on affairs in Ulster. Meanwhile in Connacht, all competitions are being held off until after Christmas, and then run on a straight knockout basis. Based on the action that was on show in this fixture, these games are a great showcase and will do wonders for the players involved, so it would make sense to get things back to normal if at all possible.

There might have been a few raised eyebrows in Edenderry at the idea of having to travel ten minutes past Athlone into county Roscommon to play this game, but St. Brigid’s GAA club in Kiltoom offers a very good winter surface, which facilitated a superb game here.