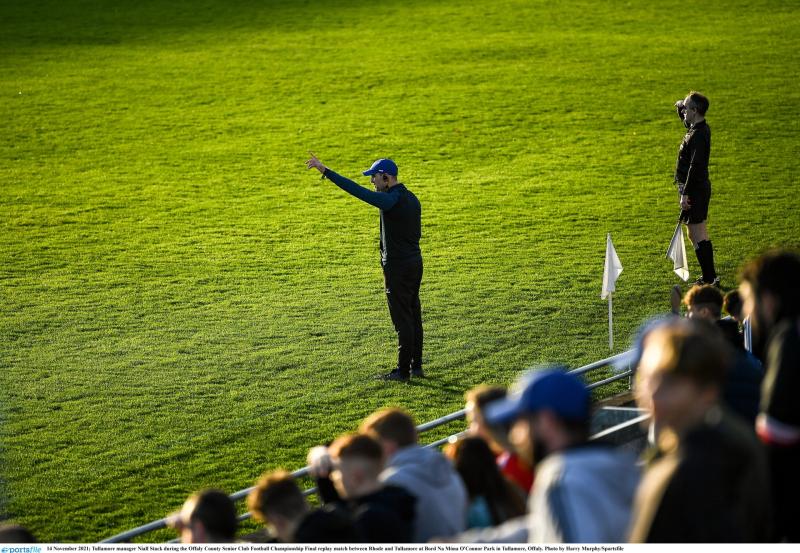 Much of Niall Stack’s reaction to Tullamore’s 0-9 to 1-4 win over Rhode last Sunday was exactly what you might expect from a man who had just been through the mental and emotional roller coaster of trying to guide his team through a Senior Football Championship final.

There was the exhilaration, the exhaustion, the joy of victory and respect for their opponents, but most of all, the appreciation of the journey they had just travelled.

“How delighted we are right now is also a reflection of how good Rhode are. I don’t have a great memory of the game but there was a lot of errors on both sides, we just made less” he said.

“We were braver this week. With youth, they can get frightened, and we spent the week before last trying to lick our wounds. Last week I felt there was a nice freshness about us. The two-week gap really helped us to get over our draw.”

For long stretches, it looked like a similar pattern was being followed, with Tullamore playing the better football but struggling to fully and properly make their superiority count.

“It was funny, I watched the Ireland-New Zealand rugby game yesterday and I felt Ireland were 10 points better than New Zealand by half time and New Zealand were winning. New Zealand had triple the amount of tackles Ireland did and yet Ireland were behind. We had to keep trusting in the process and try pull away from them. We kept going until it was done. That’s the big lesson we learned from the draw.”

“The narrative out there was that we did let it slip (in the drawn game) but I don’t think much respect was given to the 1-1 Niall McNamee scored. It was unbelievable. He didn’t get them today but what he got the last day was phenomenal. A team like Rhode you have to play for 70 minutes, and we were cognisant of that. Keep going until you hear the whistle.

However as the conversation continued, Stack quickly turned his attention to what’s down the road – an incredibly busy weekend for the club, busier than it needs to be, in his opinion.

“We now have to contest the hurling final next Saturday and we are supposed to be playing on Sunday. I think the county board and the Leinster Council have to look at that. I don’t think there’s a rush on the hurling if I’m being honest, the first round of the Leinster Championship isn’t until December. Do the County Board want us to represent Offaly as best we can? If they do they will have to look at that fixture.”

Stack went on to list some of the injuries that his players carried into Sunday’s final, and the impact it had on his role as manager.

“We put a lot into everything and want to win as much as we can. We took no championship for granted. I think you can tell from how each championship went. I’ve never had such a stressful year in my life. Being a dual club and the whole U-20s saga. I think we are getting punished for being successful if I’m being honest. Ferbane Belmont would have had it worse than we had over the last few years, and I think it has to be looked at.”

So in conclusion, obstacles to overcome for Tullamore, but exactly the type of obstacles that any dual club would want.