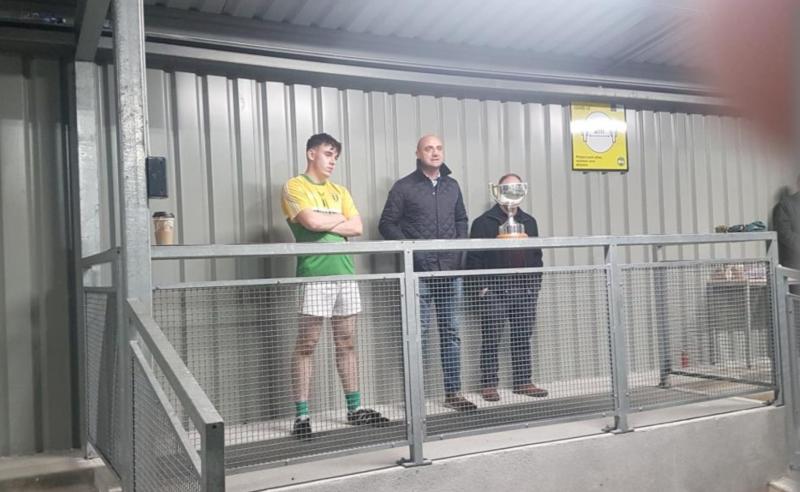 IT could have been a lot closer on the scoreboard and it could have went down to the wire but in the wind up there was no disputing the superiority of Kilcormac-Killoughey as they retained their U-20 Hurling Championship title in Kilcormac's Faithful Fields on Tuesday evening.

On an unseasonally balmy evening that was near perfect for hurling, despite a somewhat swirling wind, Kilcormac-Killoughey and Shinrone/Ballyskenagh-Killavilla (SBK) served up an engrossing, compelling game of hurling.

K-K were the better side on the day and when the game had to be won, they had several players who stood up to be counted but this was a more difficult game for them than the final scoreline might indicate.

SBK were alive and kicking for long periods but they missed too many chances for their own good while their intensity levels seemed to nose dive at other periods – especially in the moments after they had produced some of their best hurling. They did work hard but they didn't manage the same level of consistency as the winners. Yet they made a rich contribution to a very enjoyable floodlit game and they could have been really close.

K-K, however, blew them out of the water when the winning post loomed into sight in the closing ten points, playing with relentless intent and SBK just couldn't live with them late on. Ultimately K-K won because they were more clinical up front, and indeed throughout the field, and because their error count was lower.

The brilliant Charlie Mitchell and the in-form Cathal Kiely led them across the line in their attack with Kiely's accuracy from frees as well as his clever use of the ball in open play a telling factor when SBK were at their most competitive. Mitchell was wonderful, lighting up the evening with some intuitive forward play while Cathal Kilmartin, Jack Screeney, Oisin Kilmartin, Shane Mulrooney, Colm Leonard and Dylan Hand were among the many who rose to the challenge.

It was a very good win for K-K as SBK posed very searching questions of them. Dara Maher was superb at the heart of their defence while Peter Cleary made several fine clearances. Killian Sampon and Darragh Landy got through a lot of work at midfield while the SBK forwards really hurt K-K at times, especially Adam Landy, DJ McLoughlin and Paul Cleary. SBK showed great pace in attack but they were also wasteful, particularly in the first half when the majority of their eight wides could and perhaps should have been points.

The game started at a ferocious pace and the sides were level four times in the opening ten minutes. Cathal Kiely's third “65” put K-K 0-5 to 0-4 ahead in the tenth minute, Dyland Hand got a super point from play and the SBK defence was caught napping when Kiely tapped a 25 metre free to the net in the 16th minute. Both goalkeepers, Dan Gleeson and Liam O'Regan also made super saves to deny Charlie Mitchell and Conor O'Sullivan.

SBK had a series of bad wides in the second quarter with DJ McLoughlin, Killian Samspon and David Murray among the guilty parties. The losers were the better side in that second quarter and they did receive a deserved reward in the 30th minute with a lovely Conor O'Sullivan goal after a good Paul Cleary run. It was 1-9 to 1-6 in K-K's favour at the break and SBK were very much in the hunt.

K-K got the first two points of the second half but three on the trot from SBK brought the gap back to two with 19 minutes left. It looked like a real dogfight would emerge but K-K settled with two Cathal Kiely frees, the first of them a huge strike from well inside his own field. Adam Landy got two points for SBK, sandwiching one from sub Alex Kavanagh and it was 1-14 to 1-11 with 12 minutes to go.

SBK, however, didn't score again and K-K showed their quality in the closing ten minutes. Charlie Mitchell oozed class as he got four points, one from a free and a point from captain Shane Mulrooney completed their scoring as they charged over the line.

Charlie Mitchell (Kilcormac-Killoughey): Charlie Mitchell was on fire for K-K. He showed some fantastic skill, power and pace and his quality shone through. Seven points, six from play was a huge contribution and he was a big factor in K-K's win.

Cathal Kiely's free 13 minutes into the second half steadied K-K's nerves at a crucial stage. SBK had got the gap back to two points, and Kiely lofted a huge strike over the bar from near his own 60m line. His free taking was superb on an evening when SBK were not as flawless.

Shane Guinan had a really good game. The way he refereed contributed to the enjoyment factor. He let play run and allowed physicality but he was quick to show cards and pull players up when they did stray across the line – and both sides put in some hefty hits at times.

It was a good decent game of hurling and while Offaly still has a long way to go at county level, it is clear that there is some decent talent coming up the ranks.

It is always a pleasure to go to games in Faithful Fields and it is a great addition to Offaly GAA. There was a very good attendance here and a genuinely pleasant atmosphere. The field was in very good condition, the lights up to scratch and there were ample stewards to look after everything. On a different note, the K-K numbers were very hard to make out in the lights and that was a problem for all spectators – we tried our best to get everything right but apologies if there is any inaccuracies in this report.

That concludes the year for both sides, though many of these players are key part of the K-K and Shinrone senior sides.