Birr turn the tables on Shinrone 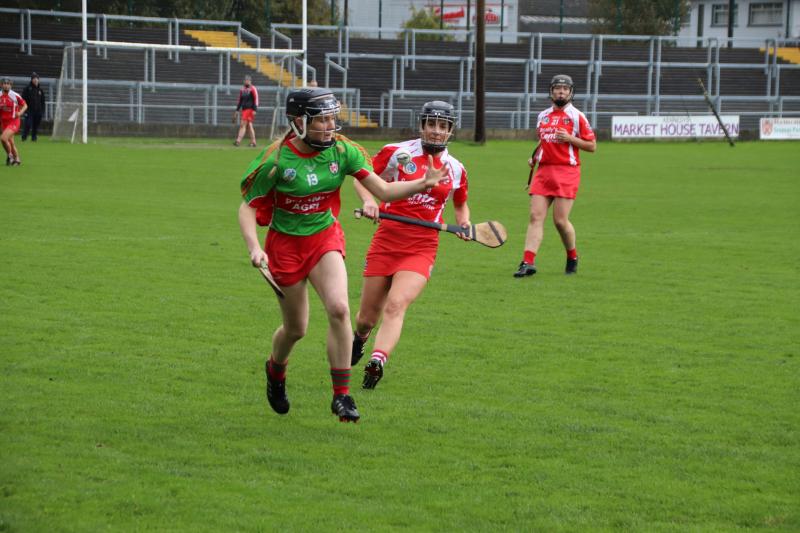 Conditions were far from ideal with a strong wind blowing and shortly after the throw in the forecasted rain began to fall but once play got underway, Mairead Jennings quickly opened the scoring with a point from a free for Birr and from the resulting puck out Birr returned the ball over the bar to give them a great start.  They went on to add another point before Michaela Morkan opened Shinrone’s account in the 10th minute.  Soon after Orlagh Kirwan went on an excellent solo run and finished by hitting over the bar.  Birr added a goal and a point before the water break to leave them with a comfortable lead with the scoreboard reading 1-5 to 0-1.

When play resumed Mairead Jennings extended her team’s lead with a point from a free but Shinrone replied with 3 points from the irreplaceable Michaela Morkan, two of them coming from placed balls. A brace of Jennings’ points sandwiched a Shinrone point before Kelly Sammon and Christine Cleary pointed for last year’s finalists.  But Birr refused to let Shinrone gain any sort of momentum in this game and points from Faye Mulrooney and Sarah Harding extended their teams lead to 6 points before the teams traded points before half time.

Shinrone were in trouble in this game and while a Grainne Egan point after the restart might have given them hope, a goal for Birr from Sarah Harding was a dagger into the heart of any Shinrone revival.  Despite that Morkan gave them a glimmer of hope when she drove at the Birr defence and finished to the net.  Scores were proving difficult to come by in the 2nd half but a Christine Cleary point from a free helped reduce the deficit for Shinrone but Birr replied in kind with a point of their own.  It was Ellen Regan that had that last say when she finished off an excellent move by Birr when she fired the ball to the Shinrone net to seal the win for her team.

Birr now move on to this year’s Senior Final, their first time to appear in the Final since 2014.  They have had an excellent campaign so far but will they have enough for the reigning Champions that seem to have gone through this year’s championship reasonably comfortably?