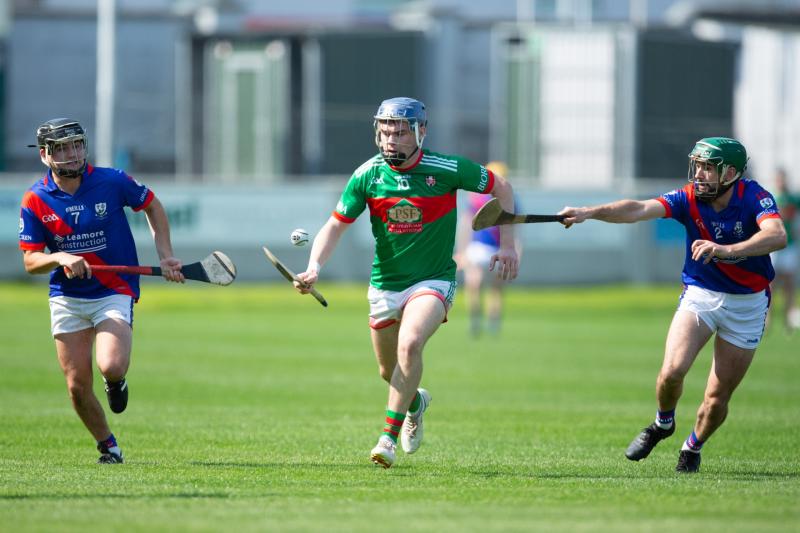 THE drama could not have been any higher, the tension any more palpable as Shinrone edged out Birr in a frantic race for the final semi-final spot in the Offaly Senior Hurling Championship on Sunday afternoon.

With St Rynagh's already through, they were joined as expected by Coolderry and Kilcormac-Killoughey, leaving Shinrone, Birr, Ballinamere and Belmont to fight it out for the fourth semi-final place.

With the last five games taking place simultaneously at different venues, it meant that it went right down to the wire and when news emerged that Ballinamere and Belmont had drawn, it meant that Shinrone were through – Birr produced a real shock as they turned in their best performance of the season by a country mile to destroy champions St Rynagh's.

For a nerve wracking few minutes, it looked like it would boil down to scoring difference to separate Birr and Shinrone and the initiative swayed in favour of both sides in the final ten minutes. However, once Belmont and Ballinamere drew and Coolderry beat Seir Kieran, Birr's fate was sealed. They had to have three teams finishing on six points to get through on scoring difference and once it was them and Shinrone, they were gone under the head to head rule as Shinrone had won their earlier meeting.

As it was Shinrone would still have got through on scoring difference. Their 4-19 to 0-11 win over Kinnitty pushed them onto +27 points, three points better than Birr who ended up on +24.

It all made for a thrilling last round and you had to feel for Birr who produced the performance of their season to beat St Rynagh's by 1-23 to 0-13. With qualification safely secured, St Rynagh's were very much off the boil but no one could have predicted such a facile win for Birr.

Ballinamere and Belmont were also in the hunt for a semi-final place but with their scoring difference much inferior to Shinrone and Birr, they knew that their chances weren't truly realistc. Ballinamere had the initiative when they led by 2-7 to 0-7 at half time but Belmont pegged them back in the second half as it finished 2-15 to 1-18.

As expected, Kilcormac-Killoughey had little difficulty in booking their place with a routine 2-19 to 0-7 win over Drumcullen.

There has been a price to be paid for St Rynagh's for their malfunction as they have been taken off top of the group and actually finish in third place. Them, Kilcormac-Killoughey and Coolderry all have eight points but Coolderry are top with a scoring difference of +47 points, K-K are second on +40 and St Rynagh's are third on +9. Shinrone are fourth with a tally of six points while Seir Kieran and Drumcullen meet in the relegation play off.

It means that Coolderry will meet Shinrone and Kilcormac-Killoughey take on St Rynagh's in the semi-finals which will take place on the weekend of November 6-7.