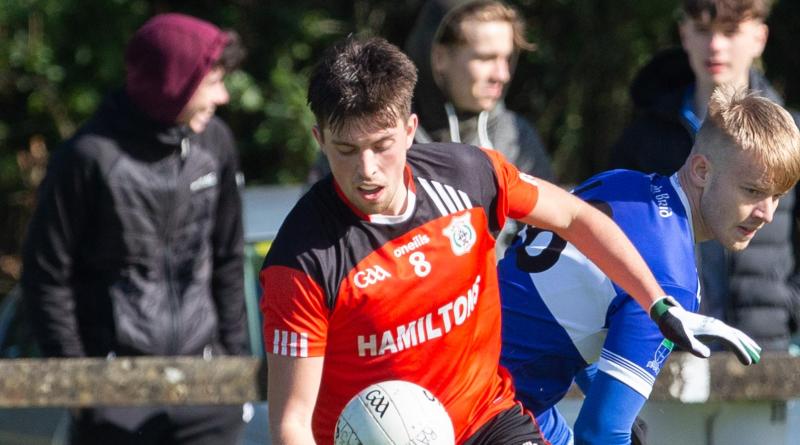 Raheen swept aside their near neighbours Clodiagh Gaels in an impressive display in Geashill on Saturday evening as they dominated the game throughout and didn’t let up over the hour.

With many players having played together underage, and some still hurling together, there were serious bragging rights on offer in this match, and Raheen certainly never looked like not claiming them.

Clodiagh Gaels didn’t manage a score from play in the first half , with Shane Dolan converting a penalty, after Mark Dillon was brought down, and their only point coming from a 45 from Kevin Kinahan.

However, there was still some hope at the interval. While Raheen had a commanding lead of 1-11 to 1-1, they had played with the aid of a strong breeze and it was still possible for Clodiagh Gaels to claw this back – Clodiagh Gaels had shocked Raheen in the first round in the group but this was a complete role reversal by an improving Raheen side.

It was Raheen who stepped up another gear in the second half, and when Paddy Rigney scored their second goal two minutes after the break, that was exactly what Clodiagh Gaels didn’t need.

In the first half, also Clodiagh Gaels had the heroics of Kevin Kinahan to thank for some brave saves, after which he needed attention on two occasions. He was also injured in the lead up to the second goal and was unable to continue after that. Adam Kinahan came into the fray, but it was damage limitation after that as Raheen ran riot.

Their third goal arrived after the ball broke to Declan Byrne who shot to the net.

Ten minutes from the end, they were in for their fourth goal when Conor Carroll eventually found Dylan Hyland with a pass, which broke kindly to him.

It was fitting that Hyland should score a goal as he was the star forward for Raheen and kicked an array of points over the hour.

Prior to that fourth goal, Clodiagh Gaels had enjoyed their best spell as they scored 7 points in just over 10 minutes with Shane Dolan leading the way with five points, while Colm McDermott (free) and Joey Keenaghan also chipped in.

At the second water break, there were three scores between the sides, as Raheen led by 3-11 to 1-8.

But that was as good as it got for Clodiagh Gaels as Raheen asserted their superiority once again, and Hyland sent over a number of further points.

Even in injury time, Raheen did not let up and their fifth goal arrived after a clever through ball from Conor Carroll to Dylan Hyland set him up to slot home his side’s last goal.

James Lalor then had the final say of the game when he added his side’s 17th point.

Raheen were worthy winners and once they found their shooting range, Clodiagh Gaels were unable to live with them.

Dylan Hyland was the star player but the midfield pairing of James Lalor and Declan Byrne won almost every high ball, ensuring that Raheen dominated. Conor Carroll, Paddy Rigney and Brian Crombie all did well in the forwards, also.

Of the defenders, both Jimmy Nolan and Glen Hasset popped up the field for scores, while Liam Boland and Eoin Corcoran were solid down the middle.

Dylan Hyland was the star performer by some distance and his scoring feats were very impressive.

There were several for Raheen but their second goal by Paddy Rigney was the decisive moment which ended hopes of a comeback by Clodiagh Gaels.

Kevin Williamson kept up with the play well and was consistent on over-carrying etc, and kept the game flowing.

The possible sacking of ‘Ollie’ was being openly discussed on the sideline late on in the match. However, it soon became clear that it was in relation to Man Utd having just lost to Leicester, not the Clodiagh Gaels manager Ollie Bryant, who had probably over-achieved on their early season targets by getting Clodiagh Gaels to the semi-final.

The Geashill pitch was in great condition and parking and traffic management on the day went very smoothly.

Raheen will face Clonbullogue, after they had a 9 point win over Daingean.