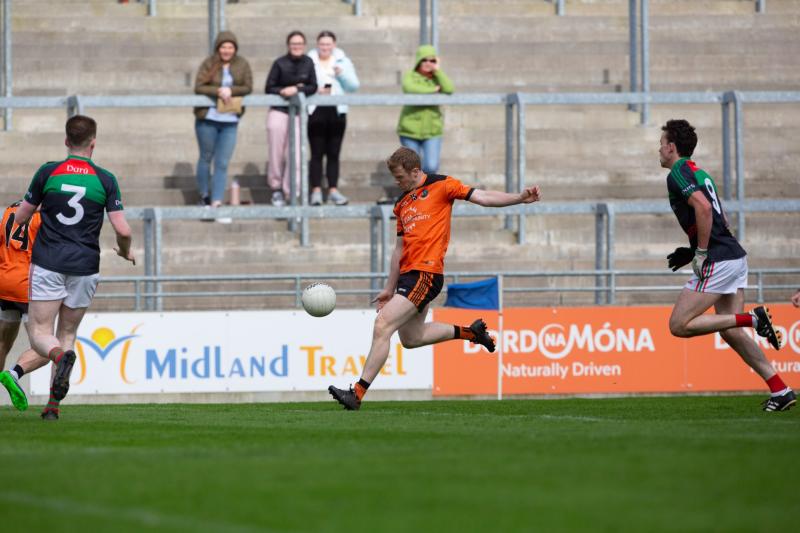 TUBBER turned in a very impressive performance as they had a surprisingly easy win over Ballycumber to reach an Offaly Senior “B” Football Championship final against Clara.

Tubber controlled the game from start to finish and their victory was never threatened from an early stage. Indeed Tubber could have won by a lot more. They could and perhaps should have got another three goals and a final tally of 3-22 would not have flattered them.

It was an all round excellent performance by Tubber. The only flaw in it was the faulty finishing that prevented them from having the game in the bag by the 20th minute but their work rate, use of the ball and general football had Ballycumber chasing shadows.

The victory does come with a warning. The resistance provided by Ballycumber was much less than expected. For whatever reason, they just never got going and they will be particularly disappointed at their work rate. They just didn't work hard enough, on and off the ball, and they were very much outfought by Tubber in this regard.

A Tubber win in itself was not much of a surprise but the scale of it and their sheer dominance was. Credit has to go to the winners for this. They hit the ground running and they had Ballycumber on the back foot from the start.

Moving forward at great pace, Tubber broke through the Ballycumber defence with alarming ease. They had three points on the board in four minutes and Ronan Farrell's score should have been a goal. In fact Tubber should have had 1-5 scored at this stage.

They continued to spurn opportunities though their full back Eddie Kavanagh did well to keep out a goal chance from Joe Lowry in the fifth minute. Bernard Allen fisted over when he perhaps should have been going for goal and the Offaly attacker also had a good chance saved by Richie Dunne, albeit on his weaker right foot. The winners had five points on the board before Keith Lawlor opened Tubber's account in the 14th minute.

Tubber had another couple of bad wides but a very well taken Ian Daly goal in the 23rd minute made it 1-6 to 0-1 and the writing was very much on the wall for Ballycumber. Tubber led by 1-8 to 0-2 at half time and could easily have had 3-13 on the board,

David Colgan, Eoin Murphy (free) and Ian Daly got the first three points of the second half to push them 1-11 to 0-3 clear and there was no way Ballycumber could win from here. They did get two second half goals. The first came from a retaken 40th minute penalty, awarded for a foul on Cormac Quinn that resulted in a black card for Joe Higgins. Jamie Colgan saved the first shot from Joe Lowry but was adjudged to have moved too soon and Lowry made no mistake with the second one.

Crucially, Tubber got the next two points from Bernard Allen and the veteran Ciaran McManus (“45”) and this meant that Ballycumber's second goal in the 45th minute didn't raise a cheer among their supporters. It came after a bad kickout by Jamie Colgan, who tried to place Lee Colgan, and Keith Lawlor got in to make it 1-13 to 2-4. Tubber got four of the final five points for a very convincing win.

It was a really impressive display by a very fit Tubber, even if they will be underdogs for the final against Clara. Brian Kelly, Dan Kelleher, Ciaran McManus, Bernard Allen, Sean Farrell, Eoin Murphy, Ronan Farrell and Ian Daly were their standout performers with their attack playing very well, despite the misses.

Ballycumber just didn't perform on the day and there were few players who will look back on this with any satisfaction. Their heads dropped as the game wore on and they were very badly beaten. Keith Lawlor was lively in the first half and Nigel Grennan tried very hard – a big online fundraising campaign had taken place during the week after the former Offaly player's house was burnt down in Mount Temple.

Brian Kelly (Tubber): Sean Farrell, Ian Daly and Eoin Murphy all made cases in an exciting Tubber attack but Brian Kelly is the choice. The Tubber wing back showcased all that was good about their display. He was efficient, did his job well and moved the ball quickly and accurately, nearly always finding his man.

Ian Daly's goal was crucial. Tubber had missed a lot before that and they needed that to make their superiority count on the scoreboard. It gave them a 1-6 to 0-1 lead.

A very good display by Eamon O'Connor. He was in control and got most calls right. He made big decisions but the Ballycumber penalty and Joe Higgins black card were deserved while he was right to get the penalty retaken if the goalkeeper had moved off his line before it was struck by Joe Lowry. O'Connor did blow the second half water break a few seconds early.

The big thing from this game for Tubber was that they did it without their star attacker Bernard Allen fighting a lone battle up front, as he has often done in the past. Allen was good but many other players stepped up to the mark and there was a great spread of scores.

Tubber play Clara in the final.