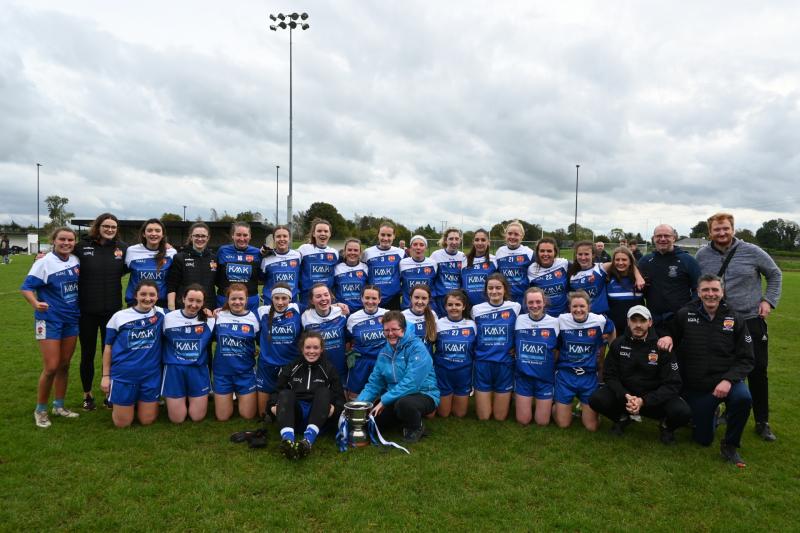 THERE were fantastic scenes of celebration and joy in Tubber on Saturday last when Tullamore ended Naomh Ciaran's long winning streak in Offaly ladies football.

Naomh Ciaran, a west Offaly amalgamation, were aiming for their seventh Offaly senior championship title in a row and their defeat marked the end of a sensational run, during which they won provincial and All-Ireland intermediate club titles.

They have been a tremendous force of nature on the Offaly scene, almost unbeatable on their day and with some superb players in their rank. In recent years, however, Tullamore have begun to emerge as genuine challengers for them and this was their third final meeting in a row.

While the gap had clearly narrowed and there was evidence of great work being done in Tullamore, significant improvement by their players, their win on Saturday still came as a major surprise. It was a history making occasion as it was Tullamore's first time to win the Offaly senior ladies football title.

This win was a massive achievement to say the least for the Blue Ladies. They have been knocking on the door for a number of years, but time and time again they succumbed to what is a masterful Naomh Ciaran side.

Nobody could possibly underestimate what Naomh Ciarán have done for Offaly Ladies Football. They have been more than worthy six time champions and while all good things do come to an end, this side will be back again.

While some may well appear to be shocked with the result, make no mistake this was a massive Tullamore performance. When they got the breaks they took them and for the defence it was nothing short of brilliant.

Time and time again, they battled hard and broke down key Naomh Ciarán move, literally putting every ounce of their being on the line. It was spectacular to watch and it forced their opponents to be take shots from distance and something that they weren’t comfortable with the more the game went on.

In life you need a little bit of luck and their opening goal of the game was just that. It was an opportunistic effort, but it was one that Sarah Kehoe took and it was the vital score that gave Tullamore the self belief that they needed.

The opening half was a polar opposite to how the second half unfolded. Naomh Ciarán were on top of their game and were giving Tullamore a torrid time.

There was only seventeen seconds on the clock when Kate Kenny it the opening score of the game and with a follow up point by the 2nd minute, it was what Kate Kenny does best. Naomh Ciarán 0-2 to no score to the good.

Tullamore were struggling to get on any ball and in reality they should have been trailing by an awful lot more with the final shooting of Naomh Ciarán leaving a lot to be desired. Eight wides in total told the tale.

The game was fifteen minutes old before Tullamore got off the mark thanks to Lisa Gorman, but the pressure was coming fast and with three on a row thanks to Kate Kenny and a brace from Roisin Egan, Naomh Ciarán were suddenly 0-5 to 0-1 ahead with four minutes to play to the break.

Tullamore needed another score and fast and with a fine score Roisin Kane gave them a lifeline at the break. Naomh Ciarán 0-5 to 0-2 ahead the half time interval.

Kate Kenny stretched the reigning champs lead within a minute of the restart but then with thirty four minutes on the clock Sarah Kehoe pulled the trigger and landed the ball to the back the net, one between the sides 0-6 to 1-2.

Kate Kenny settled a rattled Naomh Ciarán side, but that’s when Tullamore hit their own in what was an amazing purple patch.

Maebh Coleman landed a free and with forty five on the clock, up stepped Grainne Egan to the penalty spot. It was a rasping shot and with that Tullamore were in front, 2-3 to 0-7.

Grainne Egan followed up with a point from the kick out and two in a row thanks to Lisa Gorman Orla Gorman, Tullamore were suddenly five clear 2-6 to 0-7.

It was frantic to say the least, but there was even more to come. The closing six minutes of normal time and the other four minutes of injury time that was to come was second to none.

To go from four up at one point to five down was a massive hit for Naomh Ciarán, but they kept going and they did hit five scores on the trot thanks to Elle McEvoy, Roisin Egan, Kate Kenny with two and Lauren Kelly, they gap was back to one, 2-6 to 0-11.

Naomh Ciarán were relentless in injury time, but they were no match to a resilient and teak tough Tullamore defence.

There still was time for one last shot from Amy Gavin Mangan to level up matters, but a superb block by Orla Gorman stopped her in her tracks.

As the say the rest was history and it was Tullamore’s day to celebrate as Naomh Ciarán amazing rum came to an end. The final scores reading 2-6 to 0-11.