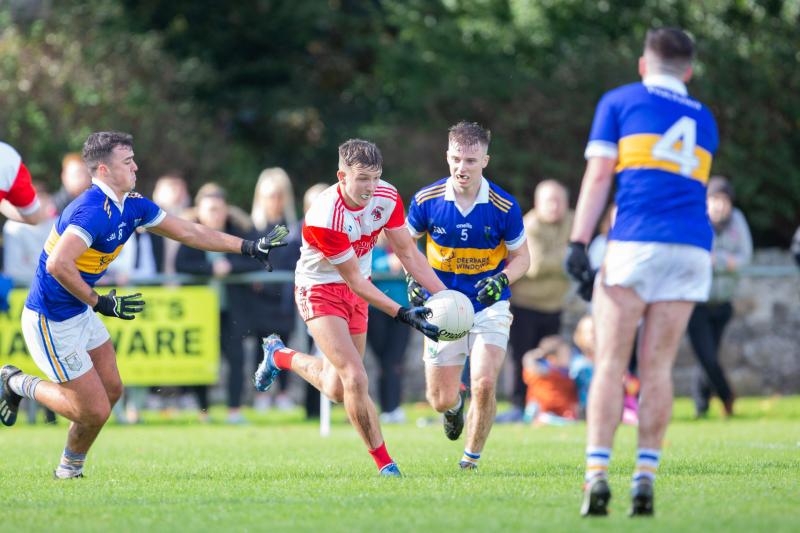 Action from Clonbullogue and Shannonbridge.

Three goals inside the first five minutes put Clonbullogue on the road to a comprehensive 18 point victory over Shannonbridge at Clara on Sunday last and put them through to the semi-finals of the intermediate football championship.

It was a devastating opening 30 minutes by Clonbullogue at the end of which they led by 4-11 to 0-2 and the game was already well over as a contest. They dominated all aspects of the game in that first half when absolutely nothing went right for Shannonbridge, who simply couldn’t cope with the onslaught from their opponents.

Ironically Shannonbridge hit the opening point of the game in the first minute but by the time they had hit their second 13 minutes later, they had conceded 3-4 and were already chasing the game. It didn’t get any better as Clonbullogue added another 1-7 without reply before half time to lead by 21 points at the break.

Clonbullogue were very impressive in that first half and on this display will be serious contenders for the title. Keith O’Neill and Shane O’Brien were the two men who did most of the damage on the scoreboard but this was very much a team performance and they worked extremely hard for each other throughout the field.

Clonbullogue were sharper in all aspects of the game. They were quick onto the ball, put pressure on Shannonbridge at all times and they linked up well with one another to create openings and good scoring chances, which they gratefully converted. They took the foot off the pedal a little bit in the second half and were able to empty the subs bench in the final quarter and but for some fine goalkeeping by Barry Rohan would have added to their goal tally.

It was a tough day at the office for Shannonbridge as the game slipped away from them at a very early stage. They could do little right in the first half. They struggled to hold on to their own kick outs, simple passes went astray and they were unable to get any forward momentum. To their credit they didn’t let the heads drop in the second half and while it was always a losing battle, they did manage to outscore their opponents in the final 30 minutes.

Jack Darcy kicked a free for Shannonbridge after just 38 seconds but that was as good as it got for the West Offaly side. Shane O’Brien then got on the end of a quick move to net Clonbullogue’s first goal. Keith O’Neill popped over a free and then twice in a minute he fired low to the net and before five minutes were on the clock Clonbullogue already led 3-1 to 0-1.

Shannonbridge doubled their tally inside the first three minutes of the second half through Gavin Kelly and Mikey Corbett. Shane O’Brien pointed from a mark with Ciaran Mannion replying. Shane O’Brien and Keith O’Neill added to their personal tallies before Jack Darcy pointed three frees in succession for Shannonbridge.

Clonbullogue’s fifth goal came after 44 minutes when Shane O’Brien cut through and shot home but they only added one more score after that. Shane Flannery, Jack Darcy and Mikey Corbett reduced the gap before Sean Foran’s last point. The final say came to sub Darragh Fitzgerald for Shannonbridge but they were still 18 points down at the long whistle.

Clonbullogue progress and they will now be looking to go all the way.

Keith O'Neill (Clonbullogue): It was a toss up between Keith O’Neill and Shane O’Brien, who scored 4-9 between them. O’Neill gets the slight nod for his lively all round play and his two quick goals early on put Clonbullogue well on the road to victory.

The game was effectively decided inside the first five minutes when in a blistering three minute spell Clonbullogue found the net three times and there was no way back for Shannonbridge from there.

It was a straightforward day at the office for Brian Gavin and a fairly easy game to referee. He was always in control and there was little of contentious note to deal with.

Clonbullogue were devastating in the first half and they dominated in all sectors of the half. Two years ago their quest for intermediate honours was ended by Shannonbridge but on Sunday it was all Clonbullogue and they are now serious contenders for this title.

Clonbullogue advance to the county semi-finals while it’s the end of the season for Shannonbridge.

Clara hosted the game well with plenty of stewards on duty to control parking and traffic. After heavy overnight rain the pitch was quite soft and wasn’t helped by another heavy shower of rain during the first half.