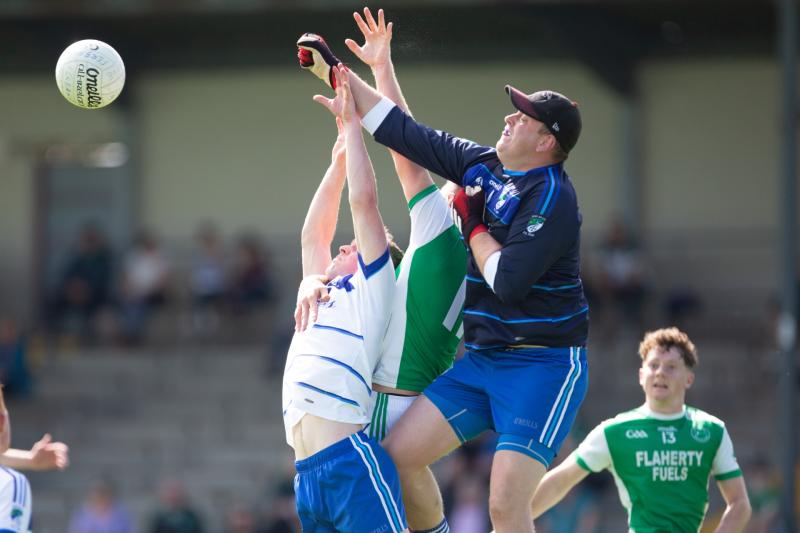 Peter Daly, from net minder to forward saviour for Cappincur.

Cappincur retained their Senior ‘A’ status for 2022 with a spirited performance against a depleted Bracknagh side on Saturday evening in Daingean. It was a fine performance from the Cappincut men and six points from the boot of Peter Daly helped them on their way to survival.

Bracknagh will go down and will be bitterly disappointed with their performance. They were without both Peter Cunningham and Offaly U20 star Fionn Dempsey who was out through injury, but they will have no complaints on the day as Cappincur were deserved winners.

It was an entertaining opening half, and it was end to end stuff with both sides fighting for their lives. Cappincur played the first half with the aid of a strong breeze which contributed to a Winter feel in Daingean.

Robin Galbrith opened the scoring with a fantastic point from a tight angle after five minutes but Cappincur responded just two minutes later through Kevin Minnock. It was the start of four points on the trot for the Cappincur men as they gained control of the opening quarter.

Peter Daly was proving a handful inside in the opening quarter and he got his first of the day with a long range free from the ground. He added to this with another fine effort, this one from play as Cappincur began to gather momentum. Peter Norris and Daly further added to Cappincur’s tally to give them a four-point lead at the first water break.

Bracknagh settled well into the game after the brief stoppage, and they started to enjoy some possession. Cunningham opened his tally for the day with a curling free and Dillon Broderick landed another impressive point from distance to cut the deficit to just two points at the half time break, in favour of Cappincur.

Eoin Carroll set Cappincur off in the first half with a point that just crept inside the post but Galbrith responded for Bracknagh two minutes later.

Two Peter Daly points put Cappincur firmly in the driving seat before the decisive moment in the game came 41 minutes in. Peter Norris did brilliantly to release the ball to Hugh Treacy when it looked as if he was bottled up. Treacy then fisted to Bill Carroll and the latter buried home to put Cappincur seven points up. A Galbraith point for Bracknagh just before the second water break left it a six-point game at the stoppage.

When Bill Carroll pointed upon the resumption of play, it looked as if Cappincur would power home, but to Bracknagh’s credit, they died with their boots on.

Six minutes from time, they were handed a lifeline when a wayward Cappincur free which was intended for goalkeeper Lauraun Ryan fell short to Galbrith, who rolled it into an empty net to give Bracknagh hope. Mikey Cunningham pointed twice, first from a free and then another audacious effort flew over the bar to reduce the deficit to just two points in injury time.

However, it was too little, too late for Bracknagh and a late Kevin Minnock point was the insurance score as Cappincur pulled off The Great Escape and will stay in Senior next year.

For Bracknagh, it is relegation to Senior ‘B’ as they could not repeat the heroics they pulled off last year. They will regroup but it is a real sucker punch for a team who have improved massively over the last year.