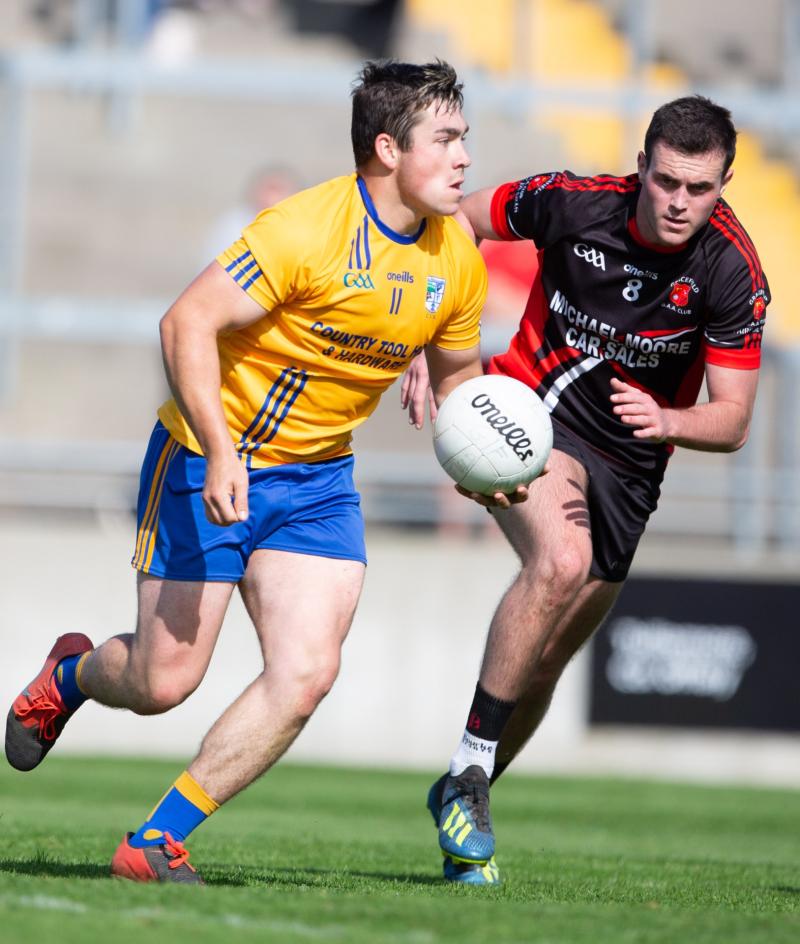 Joe Lowry had a great game in the Ballycumber attack.

BALLYCUMBER laid down a serious and compelling marker of intent when they qualified for the semi-finals of the Tullamore Court Hotel Senior “B” Football Championship with a convincing quarter-final win over parish neighbours Erin Rovers in Tubber on Friday evening.

Ignore the final scoreline here and their winning tally of three points. This was a far more impressive, an infinitely more comprehensive win than that suggests and Ballycumber's progress to the semi-final was never under real peril in the second half.

They were on somewhat precarious ground when they led by only three points, 0-9 to 0-6 after playing with the wind in the first half but even with that, they were the better team and looked likely winners. Their task was made way easier when influential Erin Rovers centre half back Richard Fox was red carded for a hard tackle that took a Ballycumber player out of it eleven minutes into the second half.

Ballycumber were on their way to victory at that stage anyway, having doubled their lead to 0-12 to 0-6 as they carried the game to under siege opponents in the second half. Fox had been one of Erin Rovers' main men, showing great leadership and pace despite being very much in the veteran stages of his long career – the teak tough centre back is not a dirty player and while his tackle merited red, it was more careless than malicious and he probably saw nothing only the ball.

Erin Rovers' misery was compounded when Ballycumber attacked at pace from the resultant free and the brilliant Joe Lowry fired to the net. There was simply no way Erin Rovers could pull back a 1-12 to 0-6 deficit, especially as Ballycumber used their extra man to double team their main scoring threat, Conor Lynam. The Pullough men did achieve scoring respectability but their two goals came as a result of very slack Ballycumber defending.

Their first goal in the 43rd minute came from the boot of midfielder Conor Owens after Ballycumber goalkeeper Richie Dunne fumbled a high ball. It brought the deficit back to five points but Ballycumber were so in control that it scarcely raised a murmur of excitement among the losers' support. Ballycumber continued to control the game and their 1-16 to 1-8 lead with five minutes left was a fair reflection of their supiority. Conor Lynam booted home a great goal, soccer style on the stroke of the end of normal time, though the Ballycumber defence again didn't cover themselves in glory. They got two late points to bring it back to a score but the final whistle went after Lynam's final one and Erin Rovers had absolutely no complaints at their exit.

They were beaten by a vastly superior side on the day, though the loss of ace attacker Nathan Poland to injury was a cruel blow. It meant that Conor Lynam provided the main threat up front and he obliged with a very good display. Lynam got 1-5, 1-3 from play while Danny Scally got three fine points from the half forward line but the Erin Rovers attacking display lacked the pace, intensity and threat of the Ballycumber one.

Ballycumber should have won this game much easier and as it was, it was very comfortable. The two Erin Rovers' goals were very preventable and Ballycumber left a lot behind them at the other end. They could very easily have scored another 2-2, 2-3 and it was a really good performance by them. It was one that suggests they could give championship favourites Clara a real rattle in this championship.

They were good in the first half though they had the first use of the wind and their three point half time lead suggested that Erin Rovers could pull it off in the second half. Attacking with real pace and menace, Ballycumber led by 0-3 to 0-1 and 0-5 to 0-2 early on but Erin Rovers had it back to 0-5 to 0-4 at the first water break. In thes second quarter, Ballycumber outscored them by four points to two for that 0-9 to 0-6 interval lead and Adrian Kelly's 21st minute point should have been a goal as he blasted over from close range.

Gary Larkin's first point of the second half after forty five second should also have been a three pointer but Ballycumber had hit the ground running and 1-3 without rely before Lynam got the first Erin Rovers score from a mark coupled with Fox's dismissal put them more or less out of sight.

There was a lot to enthuse about with this Ballycumber performance. They worked hard and played with real pace. There were a couple of holes to be picked in it – a couple of players looked sluggish, a few errors were made and some players were a bit slow to move the ball on but overall, it was a top quality performance by the winners.

They had a great collective work ethic, they had superb individual displays from Jack Quinn, Keith Lawlor and Joe Lowry and great supporting roles from Marcus Keena, Cormac Quinn, Gary Larkin, Nigel Grennan and Adrian Kelly. Despite the misses, their attacking display was the most pleasing part of the evening for them and it was a display that will have Clara and the other contenders on high alert.

For Erin Rovers, it didn't really happen on the day. Conor Lynam was their best player while Richard Fox, Declan Buckley, Conor Owens, Andrew Buckley and especially Danny Scally had good patches but overall, they were very much second best.

Keith Lawlor (Ballycumber): Jack Quinn and Joe Lowry were standout contenders for Ballycumber. Quinn superbly marshalled the defence and was immense in the second half. Lowry ran the show from centre half forward, taking on opponents at pace and showing great awareness on the ball. The choice, however, is Keith Lawlor. He had a brilliant game at wing forward, displaying great composure on his left foot. His movement on the ball was superb at times, his pace regularly took him by and clear of opponents, he scored three points and distributed very well. Lawlor had a couple of poor wides in the first half but his head never dropped, he kept trying to do the right thing and his work rate was exemplary as he chased down ball and men, winning crucial turnovers.

Marius Stones had a very solid game. As you would expect from a local derby, it was intense and hard hitting but he controlled it well. He was consistent in the way he penalised over carrying the ball. Ballycumber may have suffered most in this but they were guilty of taking a few steps as they tried to break tackles, and only one of Stones' calls against them looked truly debatable in the first half. It was telling that Ballycumber tightened up on this in the second half when they were scarcely penalised for taking too many steps.

Clara are red hot favourites for this championship but this Ballycumber performance suggests that their coronation and return to senior may not be straightfoward.

The Tubber pitch is in very heavy demand this weather because of floodlights. It held up well despite plenty of rain and Tubber hosted the fixture with great efficiency. They had loads of stewards and managed the traffic well.

Ballycumber go into the draw for the quarter-finals where they will meet either Clara or Tubber while Erin Rovers' year is over.