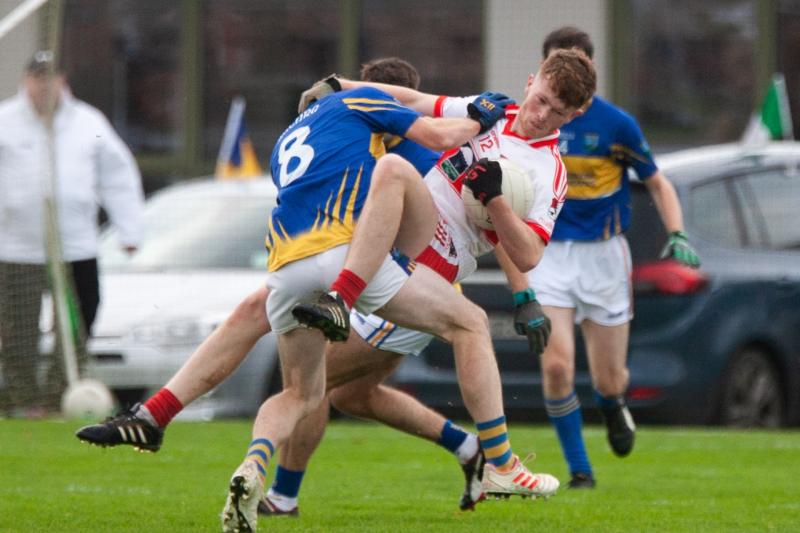 Clonbullogue and Shannonbridge are in the hunt for intermediate honours

IT is a big weekend for the Offaly football championships with the quarter-finals down for decision in the Senior, Senior “B”, Intermediate and Junior ones.

With Tubber and championship favourites Clara through to the semi-finals as group winners, the two quarter-finals in the Senior “B” Football Championship will pair Walsh Island against St Rynagh's and Ballycumber v Erin Rovers.

The parish derby between Ballycumber and Erin Rovers is one of the most attractive fixtures of this weekend.

It will be a ferociously fought contest between two sides who know each other inside out and will do everything to win. Both sides have been in decent form. Ballycumber's sole loss came against Clara while Erin Rovers were edged out by Tubber in their last game.

You can make a powerfully strong case for either side to win this and the only thing tipping it in Ballycumber's favour is that they have been marginally better than Erin Rovers in the past couple of years.

Walsh Island's form this year commands the utmost of respect and ensures they are slight favourites for their game against St Rynagh's.

They have beaten Tubber and Gracefield, lost to Erin Rovers by a point and Walsh Island's form is significant as they were relegation contenders before the start of the season. They have displayed great consistency and they nearly always play to the best of their ability.

On form, Walsh Island should be clear favourites for this. St Rynagh's squeezed through with just a point after drawing with Ferbane and losing to Ballycumber and Clara. Yet this is almost a 50/50 game, St Rynagh's won't fear Walsh Island in the slightest and a win for them wouldn't be an upset.

Relegation back to intermediate would be a shocking blow for Gracefield but it is a very real prospect after a terrible season to date. Relegated from senior two years ago, they were beaten in the senior “B” final by Durrow last year but have really struggled last year. Ferbane have done well to survive at senior “B” level considering this is their second team and they will fancy their chances here.

The Intermediate Football Championship has already produced surprises with two unfancied teams, Clodiagh Gaels and Daingean making the semi-finals. It means that the championship is wide open and any of the remaining six teams have a good chance.

Raheen have recovered well from a traumatic first round defeat by parish rivals Clodiagh Gaels. They looked good in their win over Ballycommon in the last game while St Brigid's receiving a shoicking beating from Clonbullogue, 1-18 to 0-2. This game will be a different story and we can expect St Brigid's to be competitive but a defeat of that nature does not augur well for any side's prospects.

There should be very little separating Clonbullogue and Shannonbridge in this quarter-final. Both look to be very evenly matched with plenty of fine footballers. Shannonbridge beat Clonbullogue in the intermediate final a couple of years ago but their stay in senior “B” was short lived. Clonbullogue may have improved then with county U-20 player Keith O'Neill adding fire power to their attack. Both are searching for their best form this season.

Kilcormac-Killoughey beat Ballycommon in the semi-final last year, going on to lose to St Rynagh's in the final but they have shown scant interest in football this year. Indeed, it wouldn't be a surprise if they didn't field for this fixture. Ballycommon were bitterly disappointed not to qualify and they won't want to go back junior. If K-K get their full team out, they can win this but that is doubtful and survival at intermediate is not a club priority this year.

Tullamore have been clear favourites from the Junior Football Championship from the start and they and Doon have qualified for the semi-finals in impressive style. While they were also favourites last year but were taken by Daingean in the final, it will be a surprise if Tullamore don't move up a grade this year.

Tullamore's second junior side, An Tulach Mhor have done well to reach the quarter-final and they should go close against Rhode. At the same time, Rhode's second team should be stronger than Tullamore's third one and they are the favourites.

Ballinagar have a good emerging young side. They have a county U-20 star in Morgan Tynan and other players who have played county minor and helped Na Fianna win underage championships. The transition into adult ranks, however, is taking time and Ballinagar find themselves slight underdogs for this game against Edenderry. They have a definite chance but Edenderry's form has been a bit better.

Kilclonfert will be desperate to avoid a return to junior “B” football. They have been competitive at this grade for a few years but numbers have always been an issue and they have gone backwards this year. They have a county senior player in Cathal Mangan but have lost their three games this year. While Clara bowed out of senior football last year, they have a lot of good players and their second team should be too strong for junior “B”.

Wary Rhode and Edenderry favourites to march on in Offaly SFC