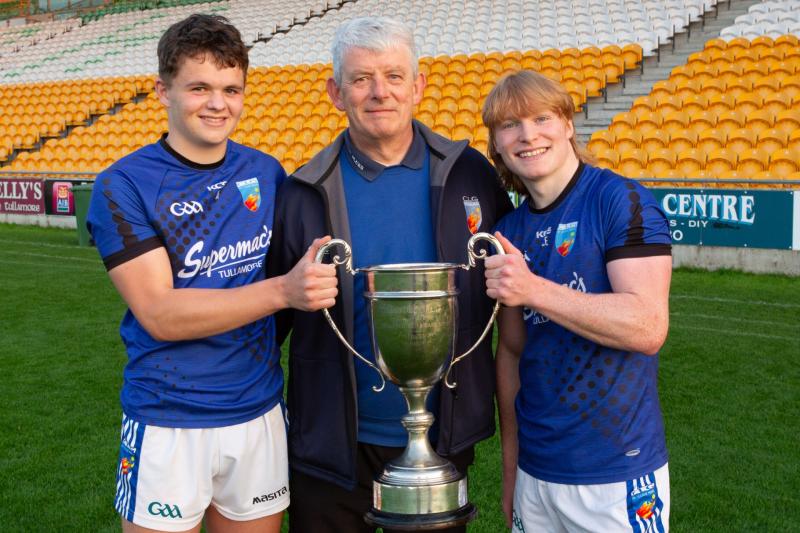 John Furlong and Cormac Egan with the MFC Cup

THE curtain will finally come down on the 2020 Offaly GAA season when a long delayed U-20 Football Championship final takes place tonight in Tubber – a 7.30pm throw in. And it promises to be an epic conclusion to an extraordinary year that saw GAA activity abandoned for long periods because of Covid-19.

It pits parish neighbours Tullamore and Durrow against each other and it really is a pairing to set the pulse racing, to excite the senses. Some of the best, most exciting young footballers in Offaly will be in action and there should be outstanding, open, attacking football.

Tullamore are warm favourites. They look to be unbeatable at this level and they have some of Offaly's best emerging footballers. They will, however, be very wary of the challenge presented by Durrow and the prospects they have of an upset win. They certainly won't be taking anything for granted and Durrow have a decent outside chance.

Tullamore have a star studded team. They have three outstanding members of the Offaly U-20 football team that captured All-Ireland honours earlier this season. Oisin Keenan-Martin, John Furlong and Cormac Egan will back bone their team and they are very hard to curb at this level. They have pace to burn, just love to play football and their energy and enthusiasm is positively infectious.

Tullamore also have midfielder, Ciaran Egan, a strong, solid footballer who was a sub on the U-20 team and never let anyone down. Luke Egan would have been on the Offaly U-20 panel but he opted for hurling when told that it was one or the other earlier in the year. Harry Plunkett would also have there and would almost certainly have been used in the All-Ireland semi-final and final only for losing his place on the panel after going on holidays ahead of the Leinster final.

John Furlong and Cormac Egan have great prospects of long senior football careers for Offaly while some of the others may also make that step up. It is an exciting time for Offaly, those players and their club Tullamore. Furlong, Plunkett and the three Egan's, Ciaran, Luke and Cormac – incidentally, they are no relation – all played for Tullamore in their Senior Football Championship draw with Edenderry last Sunday while Keenan-Martin has played earlier in the campaign and is very much a senior footballer.

They are all very comfortable at that level. Some of them are getting a lot of football and hurling this year. Cormac and Luke Egan are also on the Tullamore senior “B” hurling side and while you could question the volume of games they are getting between all codes, they are mad for action with a voracious appetite for football and hurling. That is just great to see but some of them have picked up knocks and there is speculation that Tullamore won't be at full strength this evening.

The Durrow team also have the same issues. Their side will include Offaly senior hurlers, Ross Ravenhill and Brian Duignan. They are both very good footballers and are key members of the Durrow side that have shocked people by reaching the Senior Football Championship semi-final. Their most important player is forward, Kevin McDermott. He has played U-20 football for Offaly and has been in great form for their seniors. He will lead the attack at centre half forward and if John Furlong is given the task of marking him, this could be one of the highlights of the evening.

Ravenhill, Duignan and McDermott are all playing senior football for Durrow and senior hurling for Ballinamere. They are Durrow's key players and they are getting the same mileage as some of the Tullamore players – albeit, the trio are overage for this year's U-20 competitions which are now starting.

Durrow have had a lot of players who have played minor and U-20/21 football for Offaly in recent years. That is why they are suddenly a strong senior team and that is why they have reached this final. In some respects, they will be physically stronger than Tullamore tonight. Ravenhill and Duignan have benefitted greatly for Michael Fennelly's training regime with Offaly senior hurlers. They are now very strong and impressive young men who will develop further in the next couple of years. Kevin McDermott is also older and more physically developed than some of Tullamore's players and this trio represent Durrow's best chance of success here.

And don't forget that this is a 2020 competition. That is a factor here and Durrow have an overall older side. John Furlong, Cormac Egan and Harry Plunkett were all minor in 2020 and played for Offaly as they suffered an agonising defeat against Meath in the 2020 Leinster minor football final – before being quickly drafted into the county U-20 panel with Furlong and Egan playing sensational role during Offaly's epic march.

The youth of Tullamore is balanced by the fact that Durrow didn't have any representative on the 2020 minor side or this year's U-20 squad. Despite the strength of some of the Durrow players, that does load the dice in Tullamore's favour and it is part of the reason they are such favourites.

The form book points towards Tullamore, though Durrow's form has also been compelling. Tullamore had to work hard to beat a very strong Wheery (Ferbane) side by 2-13 to 2-8 in their first game while Durrow had a run away 6-13 to 2-5 win against an out of sorts Kilcormac-Killoughey. Tullamore showed their quality in a 3-12 to 0-7 dismantling of St Vincent's in the quarter-final and annihilated Clara by 6-13 to 0-8 in the semi-final while Durrow came out the right side of an epic battle with a very good Edenderry side, 3-13 to 3-11.

The fact that Durrow had a competitive semi-final is in their favour but it doesn't dispute the fact that Tullamore are on fire at the moment.

It is one of those rare games that is genuinely possible to get excited about and online tickets are still available for it. Durrow will give it their all and they will relish taking on their neighbours. They won't be afraid of them but it is impossible to argue against the quality at Tullamore's disposal.