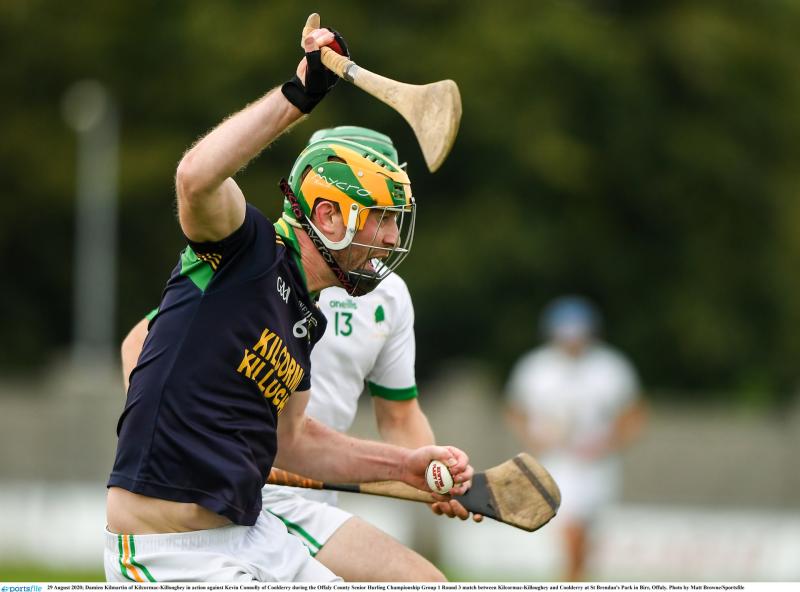 Damien Kilmartin, steady as usual in the K/K defence.

IT would be really stretching things to suggest that they proved a point after their 2020 county final malfunction a couple of weeks ago but Kilcormac/Killoughey at least got back on the right road with a comfortable win over Seir Kieran in the opening round of the Offaly Senior Hurling Championship in O'Connor Park on Saturday evening.

Bitterly disappointed at the way they were outplayed and outfought by St Rynagh's in that delayed final a couple of weeks ago, K/K are very much in transitional phase as they introduce younger players and long established ones decline or bow out – Ciaran Slevin announced his retirement this week.

The important thing for K/K here was the result and the fact that they won well against opposition who will be in the relegation dogfight. Seir Kieran were missing a few players for various reasons and it looks like being a season of struggle for them.

Despite what the scoreline might suggest, K/K won't be particularly happy at their overall performance and there was no shortage of things for their manager Tom Murphy to work on in the coming weeks. There were times when they weren't sharp, they weren't clinical and some of their passing was sloppy but there were spells when they looked very good. When they were hungry, intense, carved their opponents apart and took quality scores.

It was a mixed bag by K/K but they did what they had to do and the result was never in doubt. They did their best hurling in the fifteen minutes coming up to half time when they went from being 1-5 to 0-5 ahead to 2-14 to 0-9 clear at the break. The game was over at that stage and while K/K were sloppy for a while in the second half, they finished well and 3-25 was impressive scoring, even if the opposition by the Clareen men was a lot less than they can expect later in the campaign.

It was a step in the right direction by K/K and they are definite contenders for the title. They had quality performances here from Jordan Quinn, Damien Kilmartin, James Kilmartin, Cillian Kiely, Conor Mahon, Karl Guinan, Lochlann Kavanagh, Charlie Mitchell and sub Cathal Kiely and they should improve further as their fitness improves and the year progresses.

It was a sobering experience for Seir Kieran who were outplayed in most sectors. They missed a few frees but were not at the races – their best player was James Mulrooney who shot six points from play.

Seir Kieran were competitive for about twenty minutes but this game was over as a contest at half time. Kilcormac/Killoughey were ahead by a whopping 2-14 to 0-9 at that stage and there was no way they could lose the game from here.

The winners had made the perfect start with an excellent Conor Mahon goal after just two minutes. Seir Kieran dug deep after this and trailed by 1-3 to 0-3, 1-4 to 0-4 and 1-5 to 0-5 at different stages but Joe Bergin had three wides from frees, two of them ones he would normally convert and this meant they didn't ask the really serious questions.

K/K got sharper as the half wore on and were 1-9 to 0-7 ahead when Offaly U-20 football star Cathal Donoghue raced through for a fine 22nd minute goal. They got five of the closing seven points for that half time lead and could afford the luxury of calling ashore Donoghue and Conor Mahon before the interval though the introduction of Ger Healion and Cathal Kiely did not exactly weaken them – Mahon had been brilliant in the first half, registering 1-3 and running the game from centre forward, alongside Cillian Kiely who also made hay.

It was impossible to envisage a Seir Kieran comeback in the second half and so it proved. As you would expect, Seir Kieran knuckled down at the start of the second half, tried hard and made life difficult for their opponents. However, they never threatened the avalanche of scores that would have made this interesting. They got three of the first four points but K/K then got three on the trot to lead by 2-18 to 0-12 at the water break and the only issue was their winning margin.

It meant that there was little to excite the senses in the closing quarter as K/K won pulling up with the hard working Karl Guinan putting the icing on the cake with a 49th minute goal.

Cillian Kiely (Kilcormac/Killoughey): Kilcormac/Killoughey earmarked a new role for Cillian Kiely, taking him out of a central position and playing him wing forward. It worked well here as a lot of play still went through him and he played very well, scoring ten points, five from play. It remains to be seen if K/K will be able to persist with this against better opposition but it is a tactic that could cause problems for the better teams.

K/K's second goal from Cathal Donoghue in the 22nd minute gave them a 2-9 to 0-7 lead and ended it as a contest.

A very steady performance by Kieran Dooley who never really put a foot wrong and was not a factor at all.

Kilcormac/Killoughey have continued with the changing of the guard this year. Ciaran Slevin announced his retirement this week while the subs bench featured long time regulars such as Ger Healion, Killian Leonard, Enda Grogan and Peter Geraghty. James Gorman and Thomas Geraghty were not among the subs for this one while the injured Cathal Kiely came on in the second half.

The County Board hosted this game well and the pitch was in great condition – head groundsman Jim Kelly mowed it in between this and the earlier Drumcullen and Birr meeting.

Kilcormac/Killoughey play Belmont and Seir Kieran meet Birr in round 2.