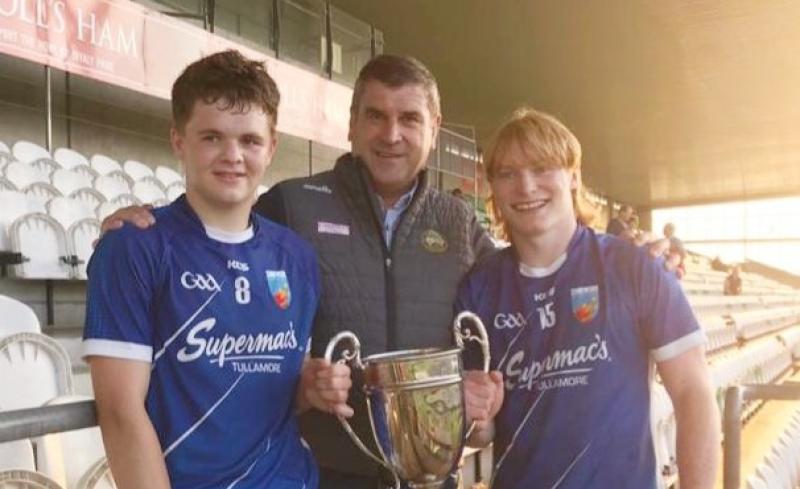 TULLAMORE turned in a much improved second half display to capture the 2020 Minor Football Championship with a hard earned win over St Broughan's in O'Connor Park on Thursday evening.

Behind by 1-5 to 0-6 at half time and second best in the first half, Tullamore worked much harder in the second half, getting on top in most sectors and they deserved their win.

They restricted the Clonbullogue parish side to just a point in the second half, moved better and got the scores that their possession and general play warranted. It wasn't simple though and St Broughan's were alive and kicking right to the final whistle, hunting desperately for an equalisiing goal deep into injury time.

However, the Tullamore defence stood firm and there was no doubting their superiority in the second half. With both sides having two of Offaly's All-Ireland U-20 winning heroes in action, there was plenty of interest in this game but apart from their quality, it was an enjoyable and keenly fought encounter.

St Broughan's played their best football in the first half. They got off to a flying start with an expertly converted Keith O'Neill penalty in the third minute, awarded for a foul on Jamie Guing and they took the game to Tullamore. The Blues had it back to a point, 0-3 to 1-1 after nineteen minutes but Broughan's got the next two from Adam Duffy and Conor Melia.

Broughan's goalkeeper Bryan Cassidy made a good save to deny John Furlong a 22nd minute goal but it was called back for a free that Furlong tapped over. Two excellent marks from Conor Melia pushed St Broughan's 1-5 to 0-4 ahead before John Furlong got two points, one from a free, to leave Tullamore trailing by two at half time.

Tullamore played really well in the second half and looked likely winners from a long way out. They were level by the 35th minute, Eoghan McConnell edged them ahead in the 37th minute and Tullamore then missed chances to really turn the screw. Harry Plunkett dropped a free short, Luke Bourke had a wide and Cormac Egan had a goal shot saved after breaking free for once.

Plunkett converted a 43rd minute free before Broughan's got their only point of the second half three minutes later from a Guing free. Cormac Egan had a punched goal disallowed for a square ball before John Furlong fired over two frees to put them three ahead with three minutes left. St Broughan's tried very hard to salvage it late on but there was no way through a superb Tullamore defence.

One of those defenders Daire McDaid did a superb marking job to limit the influence of St Broughan's U-20 county player Keith O'Neill. John Furlong was magnificent in the second half and particularly in the closing quarter as he drove his side on did the hard work and got on a lot of ball. Harry Plunkett got through a lot of good work at midfield and while Cormac Egan was a peripheral figure in the attack at times, he was always dangerous and his movement was very good - his decision making and distribution has really improved in the past couple of months. Eoghan McConnell and impressive sub Eoghain Spain also did well for Tullamore in their attack.

Diarmuid O'Neill, Tom Hyland, David Dempsey, Mark Dunne, Sean Dempsey, Conor Melia, Keith O'Neill and Jamie Guing all caught the eye at different times for St Broughan's but overall, they were beaten by the better team. They were very competitive and not far off the mark but 1-6 with just two points from play was never going to cut the mustard – the Bracknagh, Clonbullogue and Walsh Island amalgamation were missing two key players in Joe Foran and captain, Ryan Dempsey, who did come on late on.

Daire McDaid (Tullamore): A bit of a left field choice considering the quality and experience of some of the players on view but Daire McDaid was brilliant for Tullamore. John Furlong may have drove them across the finish line in the closing quarter but McDaid did the perfect marking job on Keith O'Neill. He was tight, he was hard working and he tackled well. He got his hand in, came out with ball and held the ace Broughan's forward scoreless.

Eoghan McConnell's 37th minute point was a big moment. It put Tullamore ahead for the first time and they never really looked like losing it after this.

Fintan Pierce had a good solid game. There were a couple of times that he seemed to allow advantage run a bit long but maybe he was within the right time frame. The decision to disallow a second half punched goal from Cormac Egan was questionable but he had the whistle blown early.

The presence of four of Offaly's All-Ireland U-20 football winning heroes here heightened interest in this game. Tullamore had John Furlong and Cormac Egan, St Broughan's Tom Hyland and Keith O'Neill. These players have had a hectic schedule since the All-Ireland U-20 final. They played the semi-finals on Tuesday night, their clubs are playing adult at the weekend, though Tullamore won't start their county players in the senior, and there is U-20 next week. It is a very heavy schedule and would be highly questionable in normal circumstances but on this occasion, there is little choice. This minor final and the U-20 are 2020 competitions and need to be played before this year's commence. There is a whole load of club players waiting to get going and the County Board have to play the games. County Board chairman Michael Duignan apologised for the volume of games in his presentation speech but explained that they had to get them played.

O'Connor Park was in excellent condition.

That concludes this campaign but the players will have no shortage of action in the coming months.