MATCH REPORT: Heroic Offaly bring a county to its feet and change everything 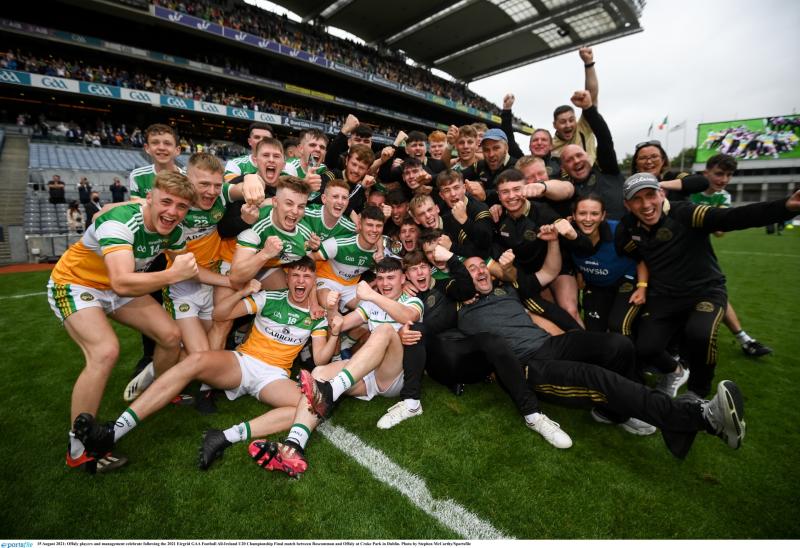 The celebrating Offaly team and management.

A TRULY HEROIC and brave Offaly brought a county to life as they recorded a sensational win over Roscommon in a thrilling All-Ireland U-20 Football Championship final in Croke Park today.

In a tension laden, drama filled afternoon that was most certainly not for the faint hearted, Offaly were pushed to the wire by Roscommon but their win was fully deserved and over the course of the championship they have been the best team in the championship.

It was not simple here and like any All-Ireland final, the game took on a life of its own. It was entirely human with spells of great football, moments of true magic mixed with patches of mediocrity, mistakes, players out on their feet and living on their wits.

There were highly emotional scenes as captain Kieran Dolan accepted the cup and the large Offaly support celebrated an achievement that no one could have imagined at the start of the year. It was a fantastic occasion for all Offaly people, a first All-Ireland title since 1998 when the hurling was won and the first football since 1988 – when Offaly won their first All-Ireland U-21.

The joy of the squad, supporters and GAA fraternity in Offaly was unquantifiable as a joyous chant of Uibh Fhaili rang around the stadium. It was a final won in true Offaly fashion, a seat of your pants ride where the team pulled well clear in the second half, allowed Roscommon back into it and hung on for dear life at the end,

Offaly were very happy to go in with a 0-7 to 0-5 half time lead having played well in the first half but lived on their wits at the back.

Roscommon had three great goal chances in the first quarter. Sean O'Toole made a brilliant point blank save from James Fitzpatrick in the seventh minute; Darragh Heneghan was wide with a great opening in the eight minute and Tom Hyland made a super block to deny Heneghan in the 12th minute.

There was real concern about the Offaly defence after this but they did tighten up while they were going well elsewhere. Morgan Tynan was doing well at midfield while the attack looked dangerous when Offaly ran at pace.

Offaly settled quickly with points from Tynan, Cormac Egan and Jack Bryant. Roscommon got the next three to level it up and really should have taken the initiative with one of those goal chances. A Morgan Tynan “45” edged Offaly ahead and they had a half goal chance when John Furlong got forward but handpassed wide as he tried to find a man in the 20th minute.

Cathal Donoghue and Aaron Kellaghan (2) got super points in a great spell of pressure before Daire Cregg (free) and Ben O'Carroll pointed to leave Roscommon trailing by two at the break.

It was tight and nervous in the third quarter with both sides working hard but making errors. Kellaghan (mark) and Tynan (free) got points for Offaly while Cregg got two, one free, for Roscommon to leave it at 0-9 to 0-7 after 40 minutes.

Then Offaly cut loose and in a scintillating spell of pressure, Cormac Egan, Jack Bryant, Cathal Donoghue and Aaron Kellaghan (after Cormac Egan had drawn a good save from Conor Carroll) fired over points to put them 0-13 to 0-7 ahead at the second half water break.

Roscommon got the next two points and then a stunning Jack Bryant goal in the 49th minute pushed Offaly 1-13 to 0-9 clear – sub Keith O'Neill made a great burst forward, drew the man and passed to Bryant who was inside. The Shamrocks man displayed incredible maturity as he swivelled on his left to turn onto his right and blast to the roof of the net – it was almost a replica of Matt Connor's great goal in the 1980 All-Ireland semi-final and it gave Offaly what looked to be an unassailable lead.

The reality turned out differently, though Offaly really should have killed the game off. A Charlie Carthy point didn't set off any alarm, nor did Offaly misses from Morgan Tynan and Jack Bryant but they could have been costly. Roscommon got back into the game but it was down to Offaly mistakes rather than anything they did. In a few incredibly nervous minutes, Lee Pearsom. Cathal Flynn and Rory Egan all made errors and after Egan failed to gather a straightforward ball, Adam McDermott got in for a 55th minute goal that cut the gap to three points and gave Roscommon a lifeline.

Tynan had another wide and another sub Jason Doory cut it to just two points with four minutes left. Four minutes of injury time were also played and it almost went wrong for Offaly but they rallied the forces again. Tynan held his composure to slot over a 59th minute free and Offaly lifted the siege as Roscommon were held at arm's length.

The final whistle was greeted by jubilant scenes as Offaly took in a fantastic achievement. It wasn't their best performance of the year but finals are all about winning and Offaly would have targetted 1-13 to 1-15 as being a winning score before the game. They did that while holding Roscommon to 1-11, though they were fortunate that Roscommon didn't get another couple of goals at least in the first half.

Once again, Offaly's collective work rate and commitment was breathtaking. They never allowed Roscommon to settle on the ball, made several turnovers and were completely honest. They had players who stood up to be counted all over the place.

Sean O'Toole, John Furlong and Fionn Dempsey were immense in a very hard working defence. Tom Hyland looked uncomfortable early on but recovered to man the square very well. Ed Cullen and Morgan Tynan were phenomenal at midfield with Tynan a man of the match contender – his striking and ability to break tackles was key to Offaly's win.

Cathal Donoghue had the game of his life, at wing forward and then midfield. His running was breathtaking, he got two crucial points and he was the man of the match. Aaron Kellaghan had his best game of the year in the attack, scoring four points, three from play and emptying the tank before being replaced. Cathal Flynn was brilliant and his improvement over the course of the championship has been instrumental in Offaly's success while Cormac Egan set the pulse racing with some sensational runs and two points. The battle between Jack Bryant and Colin Walsh was a highlight – Walsh was good but Bryant took the honours, scoring 1-2 and showing real intelligence as he pulled the full back away to open things up for his colleagues.

Keith O'Neill was tremendous when introduced and it was a day when every Offaly player could hold their heads high and they won the lasting gratitude of a county.

Cathal Donoghue (Offaly): Morgan Tynan, Jack Bryant and Cathal Flynn were all serious contenders but Cathal Donoghue is a worthy choice. He oozed quality. His work rate was phenomenal, his movement breathtaking and the two points he got a bonus as he hadn't been scoring in the campaign.

Jack Bryant's 49th minute goal won the game for Offaly. It gave them a 1-13 to 0-9 lead but it also conjured up magical memories for Offaly supporters of a very similar and famous goal that was scored by one of the county's most cherished figures, Matt Connor as he kicked 2-9 against Kerry in an All-Ireland semi-final defeat by Kerry in 1980.

Sean Hurson had a very steady game. There were a couple of debatable frees but no big flash points and he was always in control. He also deserves credit for not dishing out cards cheaply and giving players the benefit of the doubt.

The excitement of a new generation of Offaly supporters in the build up to the match and on the way up and in Croke Park. It was absolutely infectious, it showed what the GAA means to the county and hopefully it and this win will have whetted the appetite of players at all levels and in both codes for more of this.

There was over 20,000 at this which was far bigger than expected. There was a great atmosphere in the city, environs of Croke Park and at the match and as usual the venue was in top shape. There was a special applause and tribute before the game for former Ballycumber and Roscommon footballer, Conor Connelly, who died suddenly last year, which was nice but the decision not to play the national anthem was very questionable.

This concludes the season for both counties.