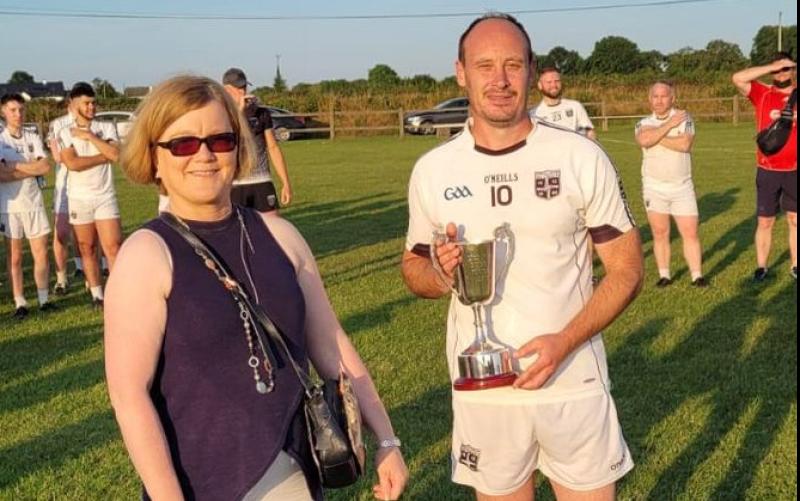 CLARA really turned the screw in the second half to record a comfortable win over Ballinagar in an entertaining Division 4 Football League final in Cappincur on Saturday evening.

Clara were completely dominant in the closing twenty minutes plus as they camped in the Ballinagar half and took control of all sectors.

It was an ultimately very convincing win for Clara but they were pushed very hard for a good forty minutes. Indeed, Ballinagar looked the more likely winners in the first half and early in the second half but they ran completely out of steam and couldn't live with Clara as the evening wore on.

Clara ended up with a lot of senior experience on the field and this proved to be the difference. Some of these may play in the senior “B” championship this year and while others won't, their know how and ability to do the right thing at pace was too much for Ballinagar when the game had to be won.

The Clara line-up included former senior stars in John Reynolds and John O'Hara. David Ledwith and David Fleming have also played senior while sub Stephen Deehan was a very good club senior player for a few years and two more subs Pa Smith and Like Dignam have also played senior. Another sub, Alex Egan may be just out of minor but he played for Offaly in the 2020 Leinster final a few weeks ago and should have a long career in their first team.

It meant that Clara had a strong team out and there was absolutely no shame in defeat for Ballinagar, though they will be very disappointed at what was fairly mute resistance in the second half.

Ballinagar are trying hard to improve. They had a lot of players on the Na Fianna minor football team that won the championship a couple of years ago and a lot of their players are beginning to feature, and star, on county minor and under 20 teams. They have lofty ambitions and desperately want to win junior but this overall performance won't be good enough to do that and they have loads of room to improve. The absence of county U-20 star Morgan Tynan was really felt here and he would have made a big difference – Tynan is preparing for the All-Ireland U-20 semi-final against Cork but Ballinagar will have to learn that they can't be depending on one man.

Clara were good when the game entered the closing quarter and they looked like winning from a good bit out. A key moment was the introduction of Stephen Deehan after just eight minutes. Deehan was a very lively, dangerous, energetic senior forward for a few years and while his fitness levels have declined, he ran the show for them when introduced here. He got three points but it was the quality of his play that stood out as he got on a lot of ball and used it very intelligently.

Another sub Pa Smith got three frees and improved the attack when introduced while Luke Dignam got the clinching goal for them and David Fleming had a very useful game up front. Conor Dolan was superb for the winners, scoring four points from midfield and driving forward when on the ball.

Ballinagar tried hard and were the better team in the first half and early in the second half but the manner in which Clara got on top suggests that they could be fitter. Whether that was the reason or not, the superiority of Clara in the last twenty minutes was very pronounced. Jacob Beatty was Ballinagar's best player and was very good in the first half – he scored five points, three from play, and was dangerous every time the ball went in. Ray Daly also impressed in the Ballinagar attack while they worked very hard and effectively until their effort levels seemed to diminish late on.

Ballinagar came flying out of the blocks and led by three points to no score within minutes. Clara had it back to 0-3 each after 13 minutes, Craig Strong and Gary Martin edged Ballinagar back in front and John Reynolds and David Fleming levelled it up. Ray Daly got in for a good goal in the 24th minute and Ballinagar were value for their 1-7 to 0-6 interval lead.

A good Beatty point put Ballinagar 1-8 to 0-6 ahead early in the second half. They should have went six clear but Clara upped the gears after this. They won almost every battle, were level by the 44th minute and ahead moments later with a Pa Smith free. As it wore on, it became clear that there was no second life in Ballinagar. Clara were 0-16 to 1-8 ahead when Luke Dignam got a late goal and Beatty's free ended Ballinagar's long scoreless streak but by this stage, the game was up.