“It's unbelievable to get over the line finally” - Cormac Egan 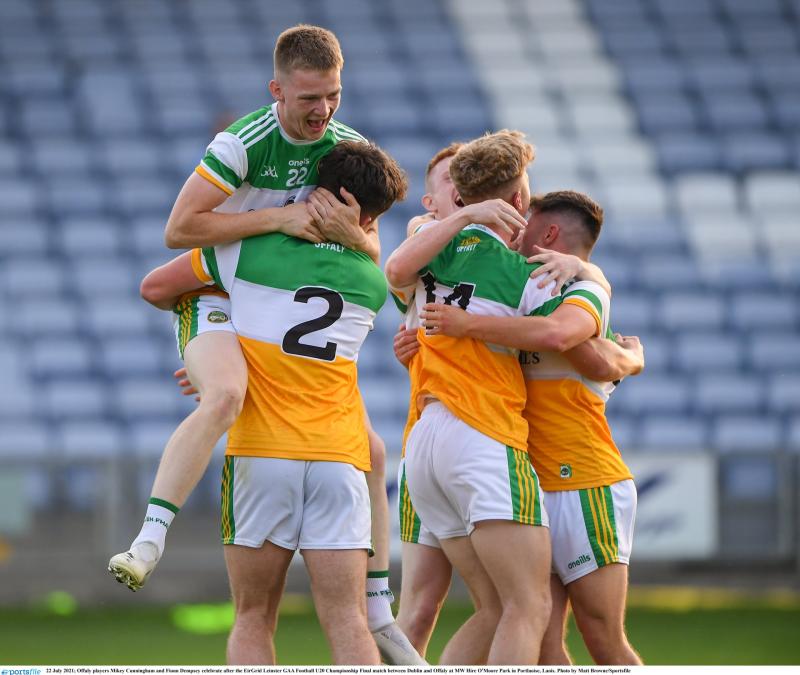 IT has been an incredible eighteen months for emerging Offaly dual star Cormac Egan and he was so happy to finally end up in the winners' enclosure in a final last night.

The Tullamore man was a key part of the Offaly minor football and hurling teams that lost the 2020 Leinster finals a few weeks ago. With them drifting into the middle of 2021 because of Covid-19 restrictions, it has been a fairly long year and a half for the flying, lightening fast forward,.

He was man of the match as Offaly had a sensational 0-15 to 3-3 win over Dublin in the Leinster U-20 Football Championship final in Portlaoise and he smiled afterwards:

He got the call from Offaly U-20 football manager Declan Kelly shortly after the Leinster minor hurling final defeat by Kilkenny and he had to give it a bit of thought before deciding to go in.

“It was a bit of a challenge to just try and get yourself up again after 18 months with the two squads. Everyone on the two squads was dejected but it is the management and it is the boys, there is a special group here and they really integrated the minors who came in and that showed today.”

In the first half, Egan and many of the Offaly forwards had to track back as they focused on containing Dublin and staying competitive into the second half.

“Dublin were able to play the ball around and at times we were back on our own “45” to pick up loose men and stuff. Then in the second half, it opened up a bit and we were able to get back up the field and play our game. To play to our style so it was good in second half.”

One of Offaly football's brightest prospects, Egan has already noticed a considerable difference between minor and U-20. He has evolved his game to adapt, spreading the ball around as much as taking his man on and he observed:

“It is the physicality really. If I look up and I see that the sweeper is in position behind my man, it's not as easy to take a man on at U-20s as minor. At minor I would fancy myself to take the man on and then go and beat the sweeper. Now it is using your head a bit and knowing when to move the ball and when it is on to take on my man.”

County dual stars are very much an endangered species and can't really prosper at the highest level any more but he has a deep and passionate love for both games. He knows that hard decisions may have to be made in the future.

“It is hard to make time for both. I just love playing both codes, hurling and football, since I was young. I loved both of them as much as each other. I was able to balance them with the minor which was hard and I was doing the Leaving Cert as well. I feel like I am able to balance them. It is hard.”

He hopes to play county U-20 football and hurling next year but with a fellow Tullamore man Luke Egan told he could only play one or the other this year by the U-20 football management, it remains to be seen if that option will be on the table. Luke Egan opted for hurling, playing for Offaly in their Leinster U-20 semi-final defeat by Dublin. All of that, however, is a story for another day and at the moment, Cormac Egan's sole focus is on the U-20 football.

“I am hoping to,” he said when asked if he would like to play for both U-20 footballers and hurlers next year. “If the chance arose but now we want to move on with this U-20 panel and hopefully win an All-Ireland,” he said.

Football does look to be his strongest game, the code where he has the greatest potential, the ability to becom a star and this is reflected by the fact that he has been offered a GAA football scholarship at UCD. Egan completed his Leaving Certificate at Colaiste Choilm in Tullamore this year and he hopes to study commerce, business in Dublin. “It is exciting,” he said about his scholarship.

Have you a preference for one code?

“It is a hard enough question. I love hurling as well, ever since I was a young age. It is a mix between both, I love playing both. Football a small bit at the minute but I love playing hurling and I am dedicated to the hurling just as much.”

Egan displayed an incredible level of fitness inside the closing quarter as he ran Dublin ragged, firing over two points and winning two frees that were scored.

“It is all the work that has been put into us over the years. Between the minors and this U-20 team, I am 19 months going. That is the work with Cronan (Mahon) and Dave O'Hare (former Offaly GAA strength and conditioning coach) and lads like that have put into us over the years. We were able to push on when over the years we mightn't have been able to. Back at U-14 or U-13, we wouldn't have been able to push on in the last few minutes. Now we are just as fresh in the last ten minutes as the first ten minutes.”

With his delighted parents Kieran and Michelle, brother, Diarmuid and sister, Blathnaid watching on proudly from the O'Moore Park stand, he spoke eloquently about what the win means to all Offaly GAA people.

“It was very emotional. Just to see the faces of the people. They are our people and what it means to them. Football is so important to them and they love the game. We haven't achieved lately and to see an Offaly team going out against a side like Dublin who are so feared and a brilliant side, and to take on them and beat them. To show the pride that our boys showed today. That is what it means to the Offaly people.”

He hopes that there is more to come for Offaly.

“It's a big achievement. We are not finished yet. We hope to push on and win an All-Ireland which would be a massive achievement.”