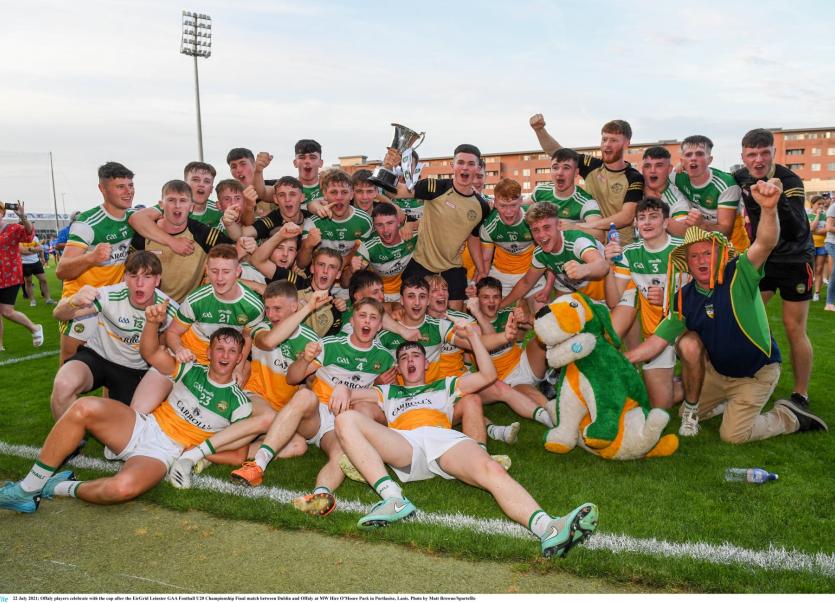 AMID scenes of gut wrenching, heart moving emotion and joy, Offaly ended years in the wilderness when they captured the Leinster U-20 Football Championship title in Portlaoise this evening.

A truly heroic Offaly were full value for their 0-15 to 3-3 win and anything other than that result would have been an absolute travesty of justice.

It was a huge performance by Offaly, full of guts and hard work and a shell shocked Dublin just couldn't match their hunger levels and desire. It was a day when everything came right for Offaly, though their celebrating supporters had their hearts in their mouth late on as Dublin chased an equalising goal that would have forced extra time. They almost got it too as a forward got a punch to a late high ball but it went out for a “45” and Offaly were the better side by a distance.

Dublin may have got three goals but the fifteen to six scores tally is a more accurate reflection of the difference between the sides. Offaly set up defensively in the first half with Oisin Keenan-Martin drifting back in front of ace Dublin forward Luke Swan. While Offaly often had few players up front, it worked very well as they kept Dublin well away from goal and Swan off the ball. He didn't score and that was a huge tribute to the Offaly defence.

The concession of just six scores was a remarkable achievement by Offaly and when they attacked, they did so in numbers and with devastating intent. They trailed by 2-3 to 0-8 at half time but had been the better team in the first half and deserved to be at least level. That first half performance, however, was pivotal to Offaly's win. They knew at half time that they were at least a match for Dublin and it sowed seeds of doubt in the favourites. They were competitive and the important thing was to get to half time in the hunt.

Offaly's second half display was sensational. They got 0-11 to 2-3 ahead after 11 minutes and when Mark Lavin got Dublin's first goal a minute later, they didn't panic. Instead they grew in stature Cormac Egan settling them immediately with an equalising point.

With the winning post in sight, Offaly were unrelenting. They drove forward mercilessly and considering the stakes and the fact that these players haven't won anything, their composure and ability to do the right thing was unbelievable. They got another three points to lead by three with Jack Bryant's free putting them ahead and a super Morgan Tynan free and a Cormac Egan point leaving Dublin needing a goal.

Dublin had scores four goals in their semi-final win over Meath but this time, they found that they had went to the well too often and they ran out of luck. There was nothing lucky, however, about Offaly's win. They were on top in most sectors and as the winning post loomed into sight, it was a genuinely emotional occasion for all Offaly people.

The county have turned a corner in football and hurling in recent years but were crying out for a title. This team delivered and the fact that it was against Dublin really puts the icing on the cake.

It was a consumnate team performance with every player working his socks on but you need outstanding individuals to win anything and Offaly had these in abundance.

Tom Hyland, a call up for the injured Kieran Dolan, was magnificent at full back while Rory Egan and Aaron Brazil excelled in a quite brilliant defence, where there were only a small few mistakes and each player did his bit.

Morgan Tynan and Ed Cullen were superb at midfield. Tynan had to pass a fitness test to start earlier in the week and he came through with flying colours. He won great ball, his distribution was superb and the point he got from play and three placed balls were instrumental. Cullen was also phenomenal and his work rate inspired his team mates and galvanised an Offaly support that grew in voice as the evening wore on, despite their small number.

Fifteen points was a very handsome return for the attack, considering the defensive set up. They were, however, so intelligent and efficient with the ball they did get. Cormac Egan was man of the match and the way he attacked Dublin in the closing quarter was amazing to witness in a player just out of minor ranks. He got two points and won a couple of frees in the closing minutes and he displayed serious maturity. His football just set the pulse tingling.

Jack Bryant also had a fantastic evening. He got six points, three from play, and he is a star in the making. He also missed chances but his ability to show for and win the ball was superb considering he was often isolated. The other Offaly forwards were asked to work so hard defensively and they all put their bodies on the line with Keenan-Martin excelling in his defensive role and Cathal Flynn getting on a lot of ball, even if he could have released some of it earlier – but on an evening where possession was king, carrying it was not a bad option and he often didn't have much choice. Sub Keith O'Neill also contributed well on a very special evening for Offaly.

Offaly settled well with quick points from a fine Morgan Tynan free and a good Cathal Flynn pooint from play. They matched Dublin well in the first quarter, even though they made a few errors as they carried the ball into tackles and spilt some.

Dublin punished those mistakes. Their first point camer from Fionn Murray after Fionn Dempsey lost the ball and they got a 10th minute goal after a long Cathal Donoghue ball was short of its target and they broke from defence. Lorcan O'Dell raced through to put them 1-1 to 0-2 ahead and it was 1-3 to 0-3 at the water break.

Oisin Martin-Keenan, a late call up for Ciaran Egan, dropped back in front of the Dublin full forward line and while this limited their chances, there was a price to be paid in the Offaly attack as Jack Bryant was often left to plough a lone furrow within twenty five metres of goal. Dublin looked average enough at times and Mark Lavin and Fionn Murray had bad wides from frees.

Offaly needed to get all their chances and a poor Morgan Tynan wide did not help their cause but Aaron Kellaghan did find the range after Cathal Flynn hit the post following a great 25th minute run – the Ferbane man had split the Dublin defence wide open and had a chance of goal. A lovely left footed point from Cormac Egan levelled it up with half time approaching and Morgan Tynan put them ahead with a rare right footed point.

Unfortunately for Offaly, their defence didn't get tight enough and Dublin got in for an injury time goal with Sean O'Toole getting a touch to Fionn Murray's shot but not able to keep it out. Jack Bryant's free left Offaly trailing by just a point, 2-3 to 0-8 at the break and they were right in it.

Offaly's confidence was up and they really tore into Dublin in the second half. Two points from Jack Bryant, one a free and the second a wonderful score with the outside of his right foot had Offaly ahead after 33 minutes.

Dublin were suddenly under fierce pressure and Bryant was on fire though he took too much out of the ball with one point chance and then hit a decent goal chance into the sidenetting. Cathal Flynn also got sight of goals but it was deflected out for a “45” that Bryant put wide. Morgan Tynan put Offaly two in front from a free but disaster struck in the 42nd minute when Mark Lavin got a goal after John Furlong failed to gather the ball. Keith O'Neill's free when Cormac Egan was scythed down following a great run made it 0-12 to 3-3 at the second half water break.

A Jack Bryant free after Cormac Egan did very well to win the ball put Offaly back in front in the 49th minute. Dublin almost got a fourth goal and Sean O'Toole did very well to save from Lorcan O'Dell. A super Morgan Tynan free after another foul on Egan put Offaly two ahead with nine minutes left and Dublin were out on their knees.Sub Simon Murphy and Lorcan O'Dell had bad wides and a Cormac Egan point after another great run put Offaly three ahead with two minutes left

In a truly dramatic finish, Offaly held on as Dublin threw the kitchen sink at them. Conor Chawke and Adam Fearon had wides and Dublin almost snatched an equalising goal when a powerful punch was deflected out for a “45”.