Limerick man still committed to the Offaly hurling cause 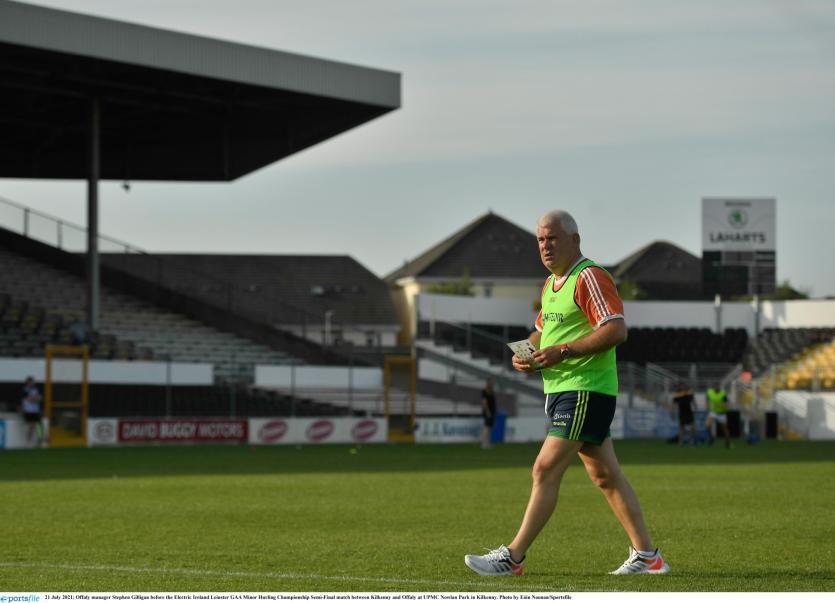 OFFALYmanager Leo O'Connor was very proud of the way his side performed but under no illusions about what needs to happen when he spoke after Wednesday's 3-23 to 1-16 defeat by Kilkenny in the Leinster Minor Hurling Championship semi-final in Nowlan Park.

Offaly were just two points down with ten minutes to go and still in with a shout as they trailed by four with five left. However, Kilkenny stormed over the finish line, getting two injury time goals as Offaly ran out of steam.

The Limerick man felt that the scoreline was harsh on them but he spoke with great passion about the improvements in physicality that is needed for Offaly to move onto the next level.

“The score was very hard on them in the finish, when you consider that they got two goals and two points in injury time. With a few minutes to go, there was a point in it. We were just dispossessed that time going through. That is typical Kilkenny. They finish the game and they go for the jugular the whole time. 2-2 in the space of five minutes and it made the scoreboard look ugly for us.

“The lads fought hard. You can't be nothing but proud of them and everything they did. They tried hard and they hooked and they blocked against a very very physically stronger Kilkenny team. That is the one thing we have to take away from all of this. It is how physical the inter-county game is, even at minor.”

He agreed that Offaly goalkeeper Kieran Coonan had an inspired evening but was quick to speak about how Offaly need to do to get fitter and stronger if they are to beat the Kilkenny's.

“Absolutely unbelievable. He pulled off some great saves but we had a chance just after half time. It skimmed over the crossbar. If that had gone in. . . It is all ifs and buts but I hope for the lads this was really a learning process for them. They now now in the last two years between 2020 and 2021 the physicality of inter-county. I was even listening to the comments during the water break and they were saying how to swarm them in the tackle. That is inter-county hurling. It's on the process of going up to senior. That is how senior county teams are doing it, they are swarming teams in the tackle. They turnover ball.”

How do Offaly get up to that level?

“The process is started already. The work gone in the past two or three years has been phenomenal so it is a matter now of stepping up and pushing on another gear. You have to identify what have other counties done. What have Cork done? Offaly are beginning to come back at U-20 level as well. Last night's game (v Dublin) could have been won. Small things again. It is just the physicality, the work and the effort that goes into it. Inter-county players are going to have to be developed. Number one they are going to have to be identified and number two they are going to have to do the necessary strength and conditioning work.

“I mention strength and conditioning a lot. That is one side of it but then you have to have pace to travel as well. Inter-county hurlers are some athletes now that are playing it. Look at Limerick and they did that to a senior team. That is the way it is.”

A member of the Limerick panel that was beaten by Offaly in the 1994 All-Ireland senior hurling final, O'Connor confirmed that he is willing to stay on as manager for another year.

“I had a brief conversation with Michael (Duignan) there tonight. We will meet, sit down and see what we come up with. Hopefully they push on and win the Christy Ring this year. That is vitally important. It is all a process. I am more than willing. I wouldn't be in Offaly only for Martin Cashen (Offaly GAA coaching and games development officer). The work has gone in. There is foresight there to see it. We are trying our best to do it and hopefully we will push on and do that.”

He agreed that it was good to see Offaly competitive for so long against Kilkenny.

“We were competitive for 56 minutes, there was only two points in it then. It is hard to believe when you look at the scoreboard. That is what Kilkenny do. That is what the big counties do now, they go for the jugular. The other side of it is two years ago, would we have been in a Leinster minor hurling final last year and would we have been in a Leinster minor hurling semi-final tonight? No we wouldn't so we are improving. There is massive improvement there but we have to get the young fellows to the next step. We have got to get the physicality into them. The athletic side of it has all to come together so there is a serious plan that has to be put together so that everything is stepping on that way. That is the way it is.”