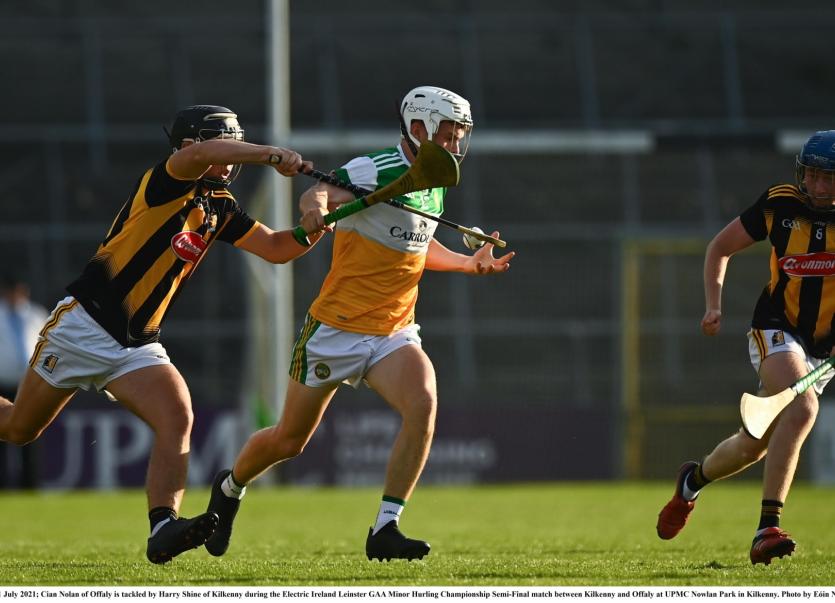 ANOTHER defeat but another very encouraging evening for Offaly as they competed very well with Kilkenny in the Leinster Minor Hurling Championship semi-final in Nowlan Park on Wednesday evening.

It was a very brave performance by Offaly and they were in the hunt well inside the last ten minutes. Offaly had the gap back to a point, 1-13 to 1-12 with twenty minutes left and were able to dream of a famous and sensational win. They trailed by just three points, 1-19 to 1-16 with ten minutes left and were within four with five to go. A victory was still possible. It didn't happen as Kilkenny got away from them in the closing few minutes plus six minutes of injury time for an ultimately comfortable win.

However, it was far from comfortable for much of the evening and Offaly had them seriously worried for a long time. The final scoreline was harsh on Offaly as the brilliant Harry Shine got a super goal in injury time and then sub Cillian Hackett scrambled one home moments before the final whistle. That 3-23 to 1-16 score in no way reflects the way Offaly battled and how competitive they were for much of the game.

Offaly, however, could only manage three points in the closing twenty minutes and Kilkenny got 2-5 without reply in the last ten minutes. Offaly can be proud of the way they played, the way they battled and the manner in which they attacked Kilkenny in the second half and threw caution to the wind. It was a display that gives further hope for the future of Offaly hurling and the gap does seem to be narrowing between them and Kilkenny.

At the same time, there was absolutely no disputing the merit of Kilkenny's win. A thirteen point defeat was hard on Offaly but Kilkenny were ten points the better team over the course of the game. They may have only pulled away late on but they also had ample chances to have won by a lot more. They led by 1-10 to 0-8 at half time and Offaly were very grateful to be in that position as they could have been blown out of the water.

An inspired goalkeeping display from Kieran Coonan had kept Offaly in it. He had a magical evening, making a succession of fabulous first half saves. Some of those were out of the top drawer, a couple of others were down to faulty finishing and he continued to mind his net with the determination of a zealot in the second half. The Clodiagh Gaels' club man was incredibly brave, he went for everything and fielded some great ball under pressure. None of the three goals were his fault while his defence also helped him keep Kilkenny at bay for extended periods.

Played on a very warm humid evening, it was a hugely enjoyable game of hurling. Kilkenny won because they made fewer mistakes and they were more clinical on the ball. Offaly were too sloppy in the first half, struggling to get some ball up with their first touch and fumbling some. It allowed Kilkenny to control long periods of that first half and the biggest mystery was that Offaly were only five points behind at the break.

They had to dig really deep to be in that position and they improved as the half wore on. They rattled Kilkenny and they certainly had the home side worried well into the second half. It may have ended up a heavy defeat but it was another step in the right direction for Offaly. Once again, an Offaly team showed great character and desire.

Apart from Coonan, they hadn't players who got up to the level of Kilkenny's star men, centre back Gearoid Dunne and centre forward Harry Shine while full forward Ted Dunne was also instrumental in their win. Gearoid Dunne lorded the centre, forcing Offaly to make tracks via the wings and in over his head while Shine was the man of the match. He looks to be a real star in the making as his touch, speed and finishing had Offaly in desperate trouble. Shine got 2-15, 1-7 from play in a truly inspirational evening.

Ted Dunne proved to be a real handful, though credit to Ruari Kelly who curbed his influence to a large degree when he moved across. The Lusmagh man began to get out for the ball in front and while Dunne remained an influence, he was kept away from goal for the most part. Dan Ravenhill also had an outstanding game in the Offaly defence. A younger brother of senior player Ross, he also looks likely to go up to the next level as his striking and hurling intelligence impressed. Cathal King had some very good moments without coming to terms with the rampant Shine.

Colin Spain did some very productive hurling and Niall Furlong worked hard in a midfield where Kilkenny brought power and physicality to the table. The Offaly attack tried very hard but didn't click into top gear. They weren't quite clinical enough for long periods and have plenty of stuff to work on. Adam Sweeney was their best player here and his pace, skill and direct running troubled Kilkenny.. He finished well while Alex Kavanagh floated over a couple of lovely points. 1-16 was a decent return but the Kilkenny defence did get the better of the Offaly attack as a unit.

The first half was a strange affair and Offaly were very happy to go in at half time just five points behind, 1-10 to 0-8. They worked hard and they fought part but they were second best in a lot of sectors and were fortunate to be still in the hunt at the break.

The Offaly defence led a charmed life in the first half. They were very honest but they could easily have conceded four or five goals and the game could have been over as a contest at the break. Offaly goalkeeper Kieran Coonan made some outstanding saves. He made a great fifth minute save from Harry Shine and then a super double save from Danny Glennon and Darragh Queally in the eight minute.

He made a few other saves and blocks as well, though some of these owed much to less than perfect striking by Kilkenny. Offaly also struggled to cope with Kilkenny centre forward Harry Shine in the first half. Shine got 1-6, four points from play as well as setting up other scores and Offaly gave him too much room.

Offaly did really well to hang in there. They were 0-5 to 0-1 behind when points from Adam Screeney and Dan Ravenhill (free) pulled them back into it. They were 0-7 to 0-3 behind but got the next two points from another super Ravenill free and a Screeney placed ball. Danny Glennon and Ted Dunne should have got goals for Kilkenny as Offaly lived on their wits. A lovely Alex Kavanagh point made it a one point game. Shine replied for Kilkenny and the Offaly net was finally breached in the 19th minute with an avoidable goal. Andrew Coakley didn't gather a ball that was his in the attack, Kilkenny swept into atack, Ted Dunne was fouled by Ruari Kelly, who had really tightened up on the imposing full forward when moved onto him. Shine dispatched the penalty to the net to put them 1-8 to 0-6 up.

Offaly gave it a real go in the third quarter, throwing caution to the wind and really going at Kilkenny. It brought them right back into the game. A great Adam Screeney goal when he raced through and blasted the ball into the net after Gearoid Dunne was dispossed made it 1-9 to 1-12 in the 34th minute. Alex Kavanagh added a lovely point and Offaly's confidence was flying. Two Screeney frees brought it back to the minimum before Kilkenny responded in the way you would expect. They got on top and led by 1-17 to 1-13 at the water break.

Offaly were two points behind, 1-18 to 1-16 with twelve minutes left but Kilkenny just had enough to get home. Points from sub Cillian Hackett and Shine (two, one free) put them five up with five minutes left. Offaly kept plugging away but the game was up for them and Kilkenny were able to close the deal out from here.

Harry Shine (Kilkenny): In normal circumstances, Offaly goalkeeper Kieran Coonan would be man of the match. He was heroic, making a series of top class saves. It was a super goalkeeping display but on this occasion, the contribution of Kilkenny centre half forward Harry Shine just can't be ignored. He ran the game for long periods, scored 1-7 from play, 1-8 from placed balls and had several other assists. He looks set for the top level.

Offaly's goal four minutes into the second half was a big moment. It was an excellent finish by the inform Adam Screeney and it made the game into a real contest as it reduced arrears to three points.

There will always be debatable decisions in the modern hurling game and this one was no different. However, Chris Mooney had a good game, he was fair and there weren't any major flash points.

The Offaly underage hurling season ended with two defeats this week, however, there was plenty to console in the performances of the U-20 and minor hurlers. The day where gallant defeats are acceptable will end but at the moment, those type of performances represent a step in the right direction for Offaly as they bid to become competitive again. There is definite improvement taking place, even if there is a long road ahead and manager Leo O'Connor spoke about the difference in Kilkenny's strength and conditioning afterwards.

Nowlan Park was in excellent condition and while the warm weather did not make life easy for the players, it made for a spectacular evening for supporters.

Kilkenny play Wexford in the Leinster final while Offaly's year is over.