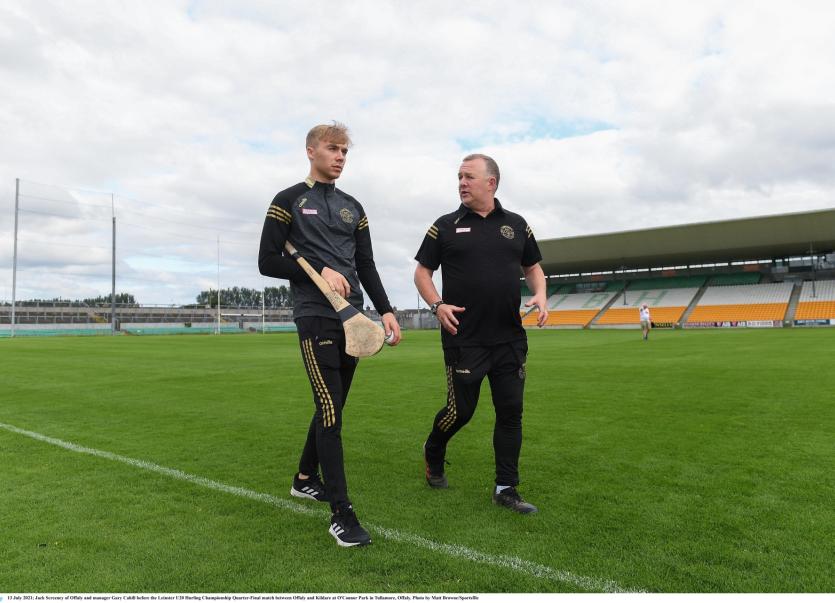 THE Man Behind the Wire received an interesting letter from a disappointed Offaly supporter over the allocation of tickets for recent county matches.

The supporter had travelled to Wexford to see Offaly win their first round of the Leinster U-20 Football Championship against the home couunty but was then unable to get a ticket for last Thursday's semi-final win over Westmeath in Mullingar.

His disappointment was understandable. There was no real problem getting tickets for the Wexford match. Even though only 500 spectators were allowed, there were not many Offaly fans making the long Thursday afternoon journey to the south-east and there wasn't massive home interest in the game. It is hard to judge in a big ground but there didn't look to be 500 people present that evening.

It was a different story for the Westmeath match. A derby match down the road in Mullingar was vastly more attractive and accessible to Offaly supporters. In normal circumstances, Offaly would bring a couple of thousand to that game. The 500 allowed in was no where near enough to satisfy demand. Offaly would have received just half of those and with players, management and backroom staff entitled to an allocation, there was very little left to give to the general public.

The letter from the disappointed Offaly fan read:

“I am writing to you on behalf of fellow genuine Offaly disgruntled fans. There are few & far between fans that have went & supported Offaly teams through thick & thin over the last 40 years or more. Fans that have travelled to all league matches down through the years nó matter what division our county was in. Fans who travel & support our underage teams no matter where they have played down through the years. I realise we are in difficult Covid times at present & tickets are very scarce but we feel there is no reward for travelling to away games that can be a two hour plus drive.

“The armchair supporters will not travel but seem to be the first to get tickets for a local intercounty match (less than 45 mins away).  Would it not be an idea for the true supporters to have a system where they can get their tickets stamped & recognised at the venue gates & be processed & sent to our County Board so they have first refusal for the next game tickets? Example: An awful lot of supporters who travelled to Wexford last Thursday night to support our U20 footballers will have to sit the local game against Westmeath in Mullingar out as the tickets were gone before they were printed. We as a group were extremely disappointed to learn this when we went looking for a ticket. Seems very unfair.

The frustration of those supporters is legitimate and understandable. It is very unfortunate that more people aren't allowed into games at the moment. There is good reasons with Covid-19 numbers on the rise but with people crying out for a return to normality and full reopening of society, you could safely get a lot more than 500 into big GAA grounds.

Supporters are missing a lot at the moment. The 2020 minor footballers and hurlers played Leinster finals, the U-20 hurlers have had big wins and it is the peak time of the season for inter-county matches.

There is no easy way is satisfying demand. The suggestion of the above supporter is a very good one but it is too late to put that system into operation at the moment. And even if it could be done, there would still be plenty of pitfalls in it.

The Offaly County Board can do very little other than what they are doing at the moment. With such a small allocation of tickets, they are right to distribute them as they see fit. They held a draw for tickets for the National Football League Division 3 semi-final against Fermanagh and while this allowed all supporters, the chance to get a ticket, it also came in for some criticism. There were complaints that the tickets should have been distributed to clubs or only club members should have been allowed enter it.

Many clubs don't actually want that hassle and either having to organise a draw themselves for a miniscule number or selecting who gets them and leaving themselves open to local controversy.

Another unfortunate spin off from the current situation is that people are looking at who is getting tickets and going to the games. They are wondering why some people can get tickets and others can. In many cases, they feel that they have more entitlement to tickets than some of the people who did get them.

In some of these cases, they would be right but it is not helpful. Every Offaly person who goes to a match is there because they are a supporter and want to see the team doing well.

You have to feel very sorry for the many people who feel deprived and the quicker supporters limits are reduced or withdrawn, the better for everyone.

2 – How many Offaly men that won All-Ireland senior football medals on the field of play were on the Offaly junior football team that won the Leinster title in 1972?

Brave Offaly give it their all in All-Ireland final

All the latest greyhound news from around the Midlands