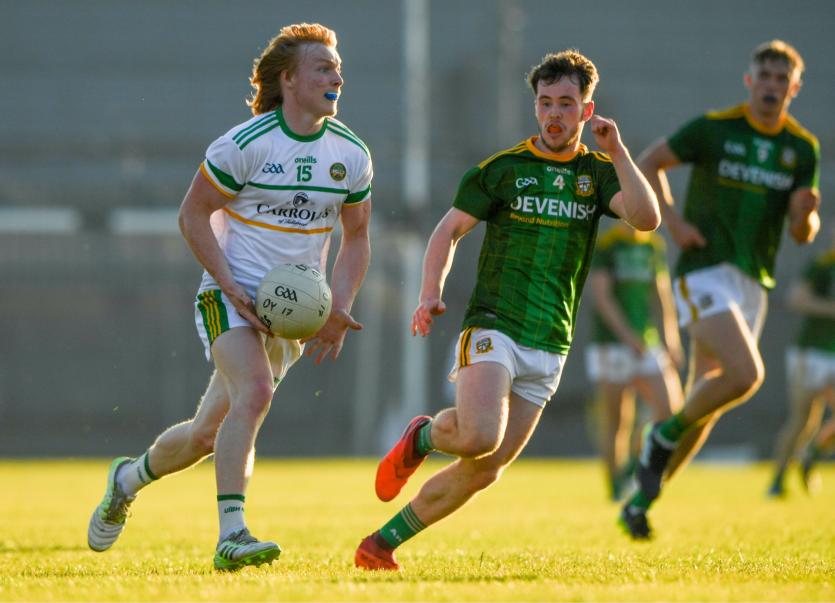 Cormac Egan had a fine game in the Offaly attack.

OFFALY showed oceans of character, true guts and ability as they booked a place in the Leinster U-20 Football Championshipfinal against Dublin with a richly deserved win over Westmeath in Mullingar last night.

Just two points separated the sides at the end and Offaly ended up hanging on but they were the better side by a distance and would not have been flattered by a bigger winning margin.

Offaly played very well. Their work rate, commitment and attitude was exemplary and Westmeath were always chasing their tail. It is to Westmeath's credit that they were so close at the end and chasing a match winning goal as this was a four or five point game on the overall balance of play.

Offaly settled quickly and were full value for their 1-5 to 1-3 interval lead. Westmeath played their best football in the third quarter and it looked ominous for Offaly when they got their noses in front, 1-8 to 1-7 with twenty minutes left. The home side looked to have the momentum but it was here that Offaly really stood up to be counted and showed their worth.

They knuckled down all over the field. The defence won some heroic against the odds ball, Ed Cullen grew in stature at midfield and the forwards pulled the trigger. Offaly got four points on the trot to go 1-11 to 1-8 clear and really should have went a “safe” four ahead. They didn't close it out and this left the door open for Westmeath who staged a late snatch and grab raid.

Ben McGauran's free got it back to two in injury time and they threw the kitchen sink at the winners but anything other than an Offaly win would have been daylight robbery and they got home.

It was a thrilling, exciting game and both sides contributed to this. It was a real old fashioned derby tussle between Offaly and Westmeath with both sides playing with full intensity and going at each other. There were mistakes and some average football but it was a full blooded encounter that kept attention focused the whole way.

Offaly had beaten Wexford a week earlier and this was an improved performance, though they lost the man of the match from that Morgan Tynan after just ten minutes here. His team mates rose to the challenge in his absence, with Ed Cullen and Cathal Donoghue doing trojan work at midfield and while it was a superb all round team performance, several individuals stood out.

Man of the match was Jack Bryant. He led the Westmeath defence on a merry dance the whole evening, scoring seven points, three from play. He showed for everything, won most of the ball that came his way and his ability to get away from his opponent took the breath away.

The Offaly defence was magnificent. Lee Pearson was excellent for most of it while Offaly had a superb half back line in Rory Egan, John Furlong and Aaron Brazil. Egan and Brazil attacked up the wings well and Furlong once again showed his immense potential. He was matured beyond his years as he won loads of ball and displayed real footballing intelligence. Special mention also to full back Kieran Dolan who had his hands full on Ben McGauran in the first half when he couldn't have had much complaints if he had been replaced but kept at it and won some inspirational ball in the second half – he ensured that McGauran was a much more peripheral figure in the second half.

Ed Cullen worked his socks off at midfield while Cormac Egan was also brilliant in the attack. A late call up, Egan's game looks to be moving to a different level as he moves from minor towards adult football. The Tullamore man has pace and can beat opponents but he also distributed quickly and scored a crucial goal and a point – he created a tingle of excitement when on the ball and looks to be a star in the making.

Cathal Flynn was also excellent in the attack. Quiet against Wexford, he raised his performance several notches and was so involved at centre half forward. He was a perfect link man while Cathal Donoghue prospered when moved out to midfield after Tynan's departure and Keith O'Neill made a terrific impact when introduced into the attack and Aaron Kellaghan played himself into the game as it went on, scoring a brilliant and crucial point with the game in the melting pot.

The opening quarter produced a mixture of good and bad for Offaly as they settled quickly and dominated much of the early play. There were two pivotal moments, one an injury and one a goal. The injury was to influential midfielder Morgan Tynan who was replaced after just ten minutes. The Ballinagar man had sustained a heavy hit to the head area in the win over Wexford and he looked shook as he went off, looking to be called ashore himself as he felt dizzy – he had missed a straightforward free as well as getting on good ball and had settled in well before his departure. His loss saw Cormac Delaney come into the attack with Cathal Donoghue moving to midfield.

Delaney had been left off in a late switch with Tullamore's Cormac Egan and Egan got a great 12th minute goal after a move involving Jack Bryant, Cormac Delaney and Cathal Flynn. Offaly led by 1-1 to 0-2 at the water break but should have been further ahead as they had five wides and were definitely the better team early on.

It continued on in a similar vein in the second quarter with Offaly still marginally the better team but Westmeath very dangerous when they broke forward, especially when full forward Ben McGauran got on the ball. Jack Bryant was brilliant for Offaly in the first half, showing for everything and he got two points, one free to push them 1-3 to 0-2 clear before Westmeath got in for a stunning 24th minute goal. The Offaly defence was guilty of standing off a bit as Devin Hill ran at pace at them but his blistering finish to the roof of the net was right out of the top drawer.

Jack Bryant replied with a point that was actually a decent goal chance as he was not far out while Cormac Delaney and McGauran swopped frees to leave Offaly ahead by 1-5 to 1-3 at half time.

Westmeath improved significantly in the third quarter as they began to get on more ball. They were level at 1-6 each after 37 minutes as a rip roaring tussle emerged. Impressive sub Keith O'Neill put Offaly back in front but two Westmeath points had them in front, 1-8 to 1-7 after forty minutes. It was their first time to lead but a delightful Cormac Egan point put Offaly on terms at the water break.

A Jack Bryant (two frees) and super Aaron Kellaghan point put Offaly three in front in the 52nd minute. Jack Bryant had a very poor wide from a 55th minute free and a four point advantage would have left Offaly in a very strong position. Cormac Delaney was wide with a “45” as Offaly continued to press forward – Keith O'Neill almost got in for a goal with Westmeath living on their wits.

Offaly became nervous with the winning post in sight and a couple of mistakes allowed Westmeath to launch a late rescue bid. Ben McGauran got a free but a resolute Offaly defence held firm as they held on for a richly deserved win.

Jack Bryant (Offaly): Jack Bryant was brilliant here. He was on fire the whole evening and scored freely from play and frees. His movement was excellent and he was a huge factor in Offaly's win.

Aaron Kellaghan's point 18 minutes into the second half was a brilliant score. Kellaghan had been out of the game earlier but played himself into it as he began to move with intent in the second half. His point from way out on the right wing gave Offaly a 1-10 to 1-8 lead and a two point advantage was very telling at that stage of the game.

There were a few debatable decisions by Seamus Mulhare, a couple of soft frees given and then ones not given for similar offences but these balanced out. He was fair and he was always in control of a tight derby show down.

Offaly are continuing to make strides forward in football and hurling. The trick now is to get over the line in a final. It is crucial to take this next step and it will be very interesting to see how they compete against Dublin next Thursday evening.

The Cusack Park pitch was in excellent condition, as you would expect in the fine seasonal weather. Even though only 500 spectators were allowed in, they created a decent atmosphere.

Offaly play Dublin in the final in Portlaoise next Thursday evening.