Tullamore made fight all the way by battling St Sinchill's 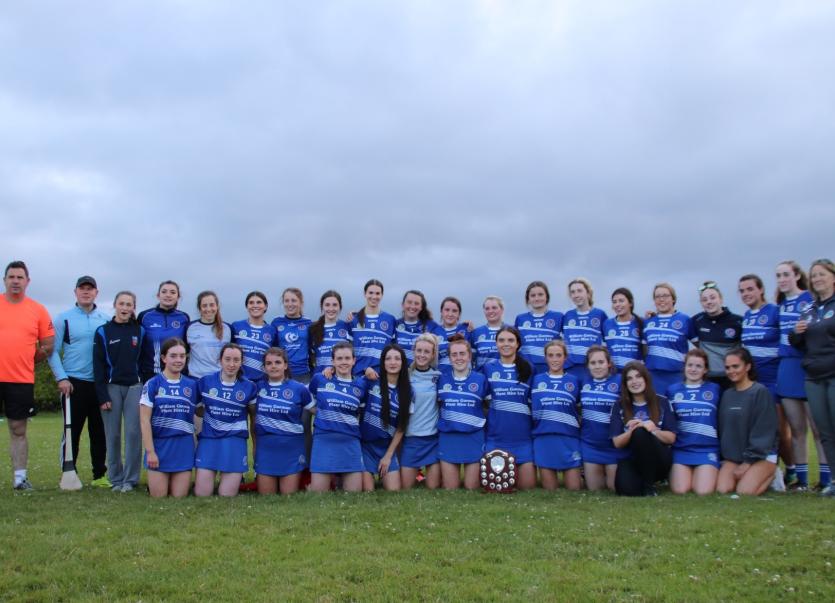 THESE two teams met in the last round of matches in the league when Tullamore won comfortably. So with that in mind, they would have gone into the final feeling confident, whereas St Sinchill's would have been looking to make amends for that defeat.

It was a game had everything, physicality, skill and even controversry at the final whistle.

St Sinchill's were quickest out of the blocks and set a high tempo from the start. Bridin Walsh was first on the scoreboard for St Sinchill's with a well taken point.

Tullamore's midfielder Chloe Fogarty responded after a run through the middle and raised Tullamore's first white flag, but after this it was all St Sinchill's for the next 20 minutes. Aoibheann Walsh and Rachel Dillon were winning ball after ball and launching attacks from the half back line, while strong runs from Lauren Keenahan, Helen Hensey and Katie Keyes lead to St Sinchills creating numerous chances.

Lauren Keenahan converted 3 frees while Katie Keyes and Bridin Walsh raised a white flag from play. It was Walsh who was on hand again near the end of the half, with an outstanding finish to the bottom corner after good work from Keelin Guilfoyle and Stephanie Hyland.

Tullamore settled into the game near the end of the half. Captain, Aisling Feeney and goalie Shannon Touhey were clearing their lines and Lisa Gorman found the range from a free with their second point. The Blue and White outfit were starting to mount attacks and this pressure resulted in a fight for possession near the St Sinchill's goal.

A foul was committed which resulted in a penalty been awarded to Tullamore. Lisa Gorman stepped up and duly dispatched a well taken penalty to the bottom left corner. Tullamore's Robyn Leavy followed up with a well taken point and this left the half time score showing Tullamore 1-3, St Sinchill's 1-6.

The second half was an extremely tight affair with both teams taking the lead at different stages. Tullamore pulled back the half time deficit through a number of frees from the stick of Lisa Gorman. A few changes in the Tullamore side saw Rachel O’Brien move to corner forward and subs Sharon Hand, Orla Gorman and Ayesha Brazil been introduced. These changes worked well for Tullamore and Brazil and O’Brien linked up for both of Tullamores goals in the second half. The first one saw Hand and Brazil create space and find O’Brien in behind the Sinchill's defence, she made no mistake in finishing the ball to the net.

St Sinchill's responded brilliantly, Kellie Kinahan found Jane Murray who was causing Tullamore problems since being introduced and she floated the ball over the bar. Then St Sinchill's Roisin Keenahan caught a ball and blasted it past Shannon Tuohy only for it to come off the crossbar but as throughout the whole game, the fantastic Bridin Walsh was on hand for St Sinchills to finish the ball to the net. Tullamore responded with a Rachel O’Brien point. Once again it was Roisin Keenahan and Bridin Walsh who linked up for Sinchill's next goal with Walsh setting Keenahan up with a ball across the square which she flicked into the net leaving Sinchill's in the lead.

With neither team giving up, Tullamore responded with O’Brien finding the net once again. The St Sinchill's goalie was moving to collect the shot but was very unlucky to see the ball take a deflection off a St Sinchill's defender and nestle in the net. Lisa Gorman and Lauren Keenahan traded frees which left for a nervy ending for both teams and supporters. St Sinchill's had 2 21 yard frees in the closing stages with one of them just sailing over the crossbar and the Tullamore defence stood firm.

When the final whistle went there was some controverSy over the score, but Tullamore were deemed Division 2 League Champions with referee Ciaran Groome declaring the score 3-10 to 3-9 in Tullamore's favour, before Melissa Mulroney,