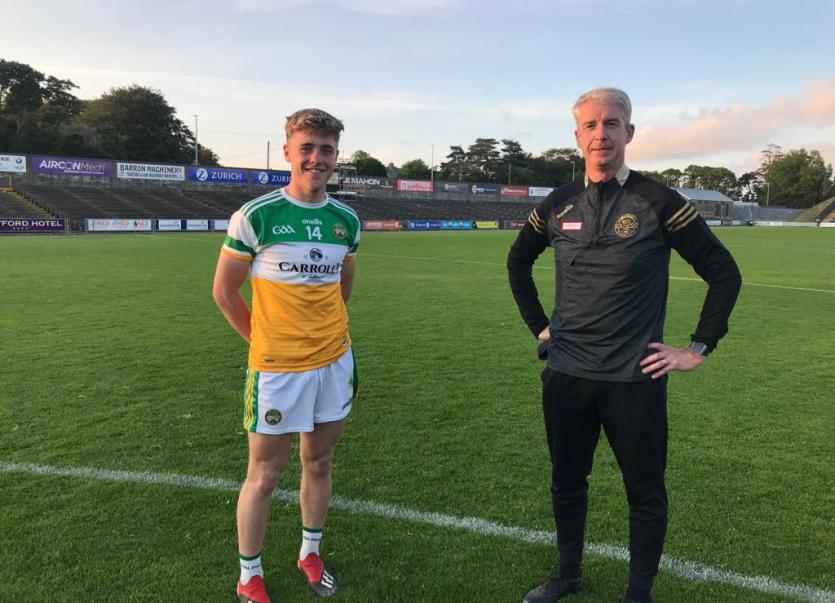 Jack Bryant with manager Declan Kelly after the win over Wexford.

A LATE Wexford rally meant that he was on tenderhooks for the last few minutes but Offaly manager Declan Kelly did not disguise his satisfaction after a 1-10 to 1-9 win over Wexford in the Leinster U-20 Football Championship on Thursday evening in Wexford.

Ahead by 1-10 to 0-6 with ten minutes to go, Offaly were in complete control but Wexford scored 1-3 without reply in the closing minutes and were not far from forcing extra time or snatching a win.

It was way more uncomfortable than it should have been but for Declan Kelly, the result and a semi-final place away to Westmeath next Thursday evening was all that mattered.

“We had a couple of goal chances we didn't take and they got a couple of scores early in the second half then to bring it back to two points. There was a fair bit of a wind out there. We got a penalty and in fairness Jack put it away. We had our noses in front and you would be thinking with ten or fifteen minutes to go that we were going to see it out.

“They came back strong and then they got the goal. One of those that came back off the post, a ricochet around the place and they had their foot on the gas at that stage. We probably had a couple of chances either side of the goal to tag on scores and missed them. We were hanging on at the end.”

The Kilclonfert man agreed that the final scoreline did not tell the full story of the game but he said:

“Wexford in fairness to them, having a game under your belt is a big big help to a team. They were very well organised. They got a run on us and we lost Morgan (Tynan, who went off injured in the 54th minute). We had to change things around at midfield, which had been going quite well at that time. It did take us a bit of time to get our hands on the ball.”

The games will come thick and fast for Offaly now as long as they stay winning. They started one of the 2020 Leinster minor football finalists here, John Furlong with Keith O'Neill coming on as a sub. Two more, Tom Hyland and Cormac Egan were unused subs while Harry Plunkett, Jamie Guing and Cathal Ryan are on the extended panel. Some of them may now come into the equation.

“It is possible. We only brought them in last Saturday and John (Furlong) played tonight. He played well, We brought on Keith (O'Neill). We had a couple of more on the bench and there is a couple of more involved in the extended panel. It is quite possible a couple of more will come into the mix.”

Players who didn't feature have been given the go ahead to play for their clubs in league games tonight (Friday) as they “need football” and the panel will reconvene on Saturday for a training session.

While he agreed that it wasn't a perfect performance, Kelly was just happy to get the win.

“We don't have a great record here in hurling or football. The big thing is to win. I said if we can come out of here with a one point win I will be happy. The main thing is we are in the next round.”

Wexford set up defensively and didn't score from play until the 51st minute, their eight point. The manager, however, was concerned at the rate of fouling by Offaly.

“We did give away a lot of frees. We will have to look at and analyse that and our tackling. They had a lot of bodies back and they tried to crowd us out,” he concluded.