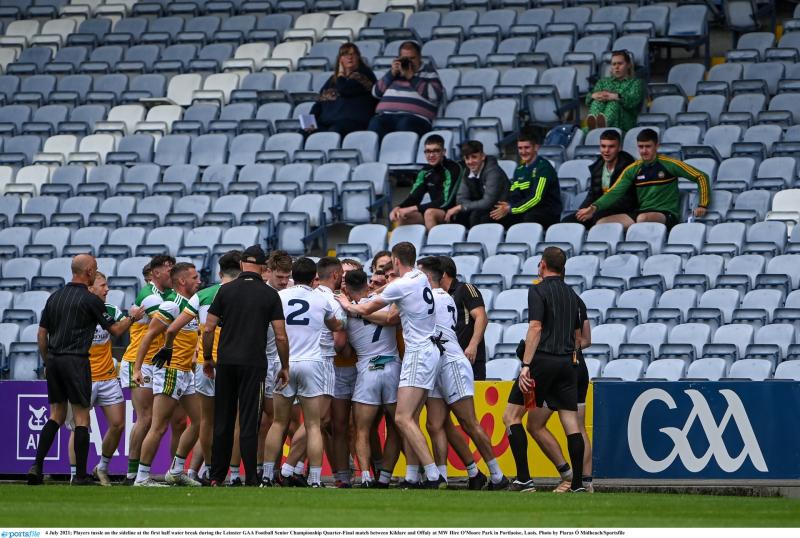 Offaly and Kildare tussle in the first half.

OFFALY gave it their best shot but it still came up short as their season came to a sudden end with a Leinster Senior Football Championship quarter-final defeat by Kildare in Portlaoise.

A very promising first half performance gave false hope as Offaly were eventually overcome in the second half. They weren't far away and could have won if they converted more of their chances but there was no doubt that Kildare were the better team and deserved to advance.

Offaly missed a couple of great goal chances and had several bad wides but Kildare also had their share of misses. Offaly looked to be heading to a heavy enough defeat at one stage in the second half but Kildare were reduced to thirteen men when Ryan Houlihan picked up a second yellow in the 59th minute and Jimmy Hyland got a black four minutes later and this allowed them back into it.

Offaly got the gap back to 1-13 to 0-13 with four minutes of injury time to play but they never truly looked like they could salvage the game from here. It was a brave effort by Offaly but it just wasn't quite good enough. It wouldn't have taken a lot for Offaly to have won the game but they needed a goal and they needed something special to happen. They had their goal chances but Anton Sullivan and Eoin Carroll didn't convert them and these balanced out as Paddy Dunican made two great saves to deny Kildare other goals.

Offaly were 0-6 to 0-5 behind at half time and had played well enough to be ahead. Kildare got a run on them early in the second half with man of the match Neil Flynn getting the decisive goal in the 56th minute. That gave Kildare a 1-13 to 0-8 lead and it was always going to be too big of a deficit for Offaly to haul in. They didn't play well enough in the second half as they struggled to cope with Kildare's physicality and the result was a fair one.

Yet it was a decent display by Offaly and they gave a good account of themselves. Gallant defeats are no longer a good outcome for Offaly and this came under that banner but they did give it their all on the day. They could have won it but at the same time, they were well enough beaten in the end and Kildare looked like progressing from a long way out.

It has still been a good season for Offaly with promotion to Division 2 secured and team captain Niall Darby spoke afterwards about the importance of retaining the services of manager John Maughan for that.

Offaly tried very hard on the day but there were not enough outstanding individuals displays. There was great honesty and work ethic but that bit of magic was missing as they engaged in a patient build up. Cian Farrell was once again Offaly's best player, scoring eight points, four from play. Niall Darby had another excellent game in a defence where Johnny Moloney was also very good, especially when moved back to full back after an injury to Eoin Rigney.

Midfield was again a problem zone for Offaly. Jordan Hayes put in a great shift for much of the first half but ultimately Kildare took this battle. Cian Farrell was the only forward to pose a regular, consistent scoring threat and overall, it just didn't quite happen for Offaly.

Offaly were impressively up for the game and hit the ground running from the throw in. Frees from Niall McNamee and Cian Farrell got them off to a flying start before Kildare levelled it up. The sides were also level at 0-3 each before a super Cian Farrell point put Offaly 0-4 to 0-3 ahead at the water break – after a very patient build up by Offaly, Farrell broke the line and angled over a great kick with the outside of his left foot.

Offaly missed good chances in the second quarter. Niall McNamee was wide with a mark, from the wrong side of the field and Anton Sullivan missed a great goal chance in the 22nd minute, Sullivan did well to break through the Kildare cover but his left foot shot was tame and lacked conviction – substituted early in the win over Louth, Sullivan got on a lot of ball but confidence seemed to be an issue for him as he gave a few wayward balls.

An injury to full back Eoin Rigney saw Offaly re-align their forces with Johnny Moloney going to full back, Carl Stewart back to centre back and Shane Horan coming onto the team in the attack. Kildare equalised with a Neil Flynn free and Offaly missed chances in a sustained spell of pressure. Horan had two wides and Cian Farrell also blazed wide while Sullivan underhit a point chance.

Flynn put Kildare in front from a free, Bernard Allen equalised with a lovely score – the Tubber man came on for Ruari McNamee who had passed a pre-match fitness test but never got motoring – and a Mick O'Grady mark deep into injury time gave Kildare a 0-6 to 0-5 half time lead.

Offaly were unlucky to be behind and they had ample chances to be level or in front but were playing well and at the break, they looked to have a very good chance.

Things went wrong for Offaly early in the second half. Kildare got on top and got the first four points tio lead by 0-9 to 0-5 after 41 minutes. Offaly had missed another decent goal chance with half time sub Eoin Carroll wide after bursting into space in front of the Kildare goal. Offaly did dig deep after that, battling hard and fine points from Anton Sullivan and Cian Farrell settled them. Aaron Masterson fisted a Kildare point and Farrell cut it to two with a 48th minute free.

Worryingly, Kildare were getting on top in most sectors and two Neil Flynn points, one from a “45” and one from play, had them 0-12 to 0-8 up at the second half water break. Offaly were also beginning to cough up possessiobn too easily, carrying the ball into tackles and losing it.

It was all over within minutes as Jimmy Hyland got a point and then Neil Flynn raced through for a fantastic goal, tearing through the centre and slotting home with his left foot in the 56th minute. That put Kildare 1-13 to 0-8 ahead and Offaly were living on their wits. They were thrown a lifeline in the 59th minute when Ryan Houlihan was sent off for a second yellow after putting the boot in. Cian Farrell converted the free to make it a seven point game.

A black card for Jimmy Hyland in the 63rd minute meant that Kildare had 13 players for 10 of the last 11 minutes and it kept the door very slightly for Offaly. Offaly fought hard and got four points to bring it back to four pointsm 1-14 to 0-13 with four minutes of injury time to be played. There was a glimmer of hope but they didn't threaten to salvage it and Kevin Feeley's closing point got Kildare across the line.