Brave Offaly go down with their boots on 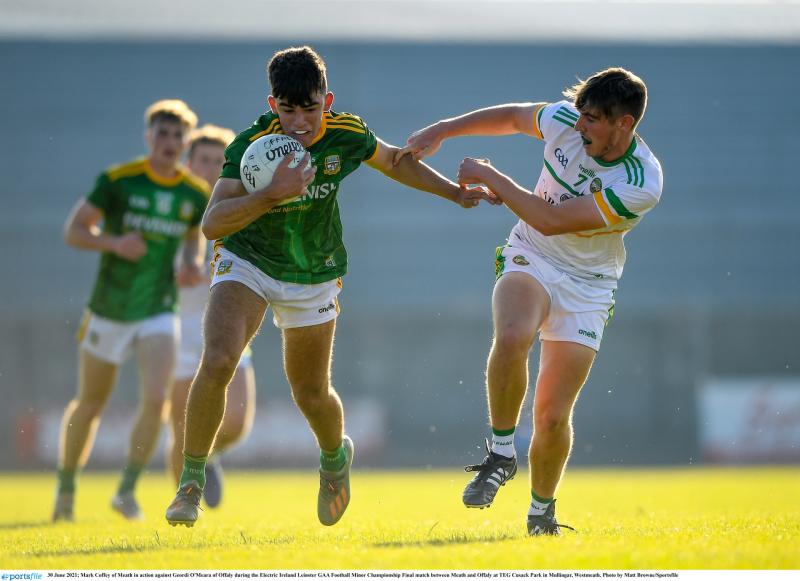 A VERY brave Offaly side certainly went down with their boots on when they lost by a heartbreaking point in the 2020 Leinster minor football final in Mullingar on Wednesday night.

Offaly gave it absolutely everything they had on the day and it was a gut wrenching defeat. They staged a terrific rally in the closing quarter to come from five points down back to level terms and in a tension filled closing few minutes, Meath just squeezed across the line.

Over the course of the 60 minutes plus, Meath were marginally the better side and Offaly will be the first to cap their hats to them. However, it was a very close run thing and it would have taken almost nothing for Offaly to have forced extra time or taken a famous victory.

It was far from a classic and the first half was a nerve filled affair with open football at a premium. It was very low scoring and Meath led by 0-4 to 0-2 at half time.

The winners were way the better side in the third quarter with Liam Stafford's goal helping them to a 1-5 to 0-3 lead after 45 minutes. An opportunist goal from Pauric Robbins ignited the Offaly challenge and with time drifting towards injury time, they had it back to level terms. A victory was within grasp but it was Meath who got two of the final three points to win it.

Highly rated from the start of the season last year, Meath were very relieved and knew they had been through one hell of a battle. Offaly were seriously competitive on the day and they certainly could have won it.

Ultimately, however, Meath just had that little bit more. They edged the midfield battle where Sean Emanuel and Conor Gray were superb and in full forward Eoghan Frayne, they had the best player on the field. They had a slight edge in physicality and power and it is to Offaly's credit that they were so close.

Offaly defended superbly from the start, tackling well and making great interceptions. By conceding just 1-7 they gave Offaly a great chance of victory. Diarmuid Finneran had a great game in a very honest defence where Ciaran Conroy and Cathal Ryan also prospered – unfortunately a mistake by Daingean man Ryan led to Meath's all important goal.

John Furlong worked his socks off at midfield and really rallied the forces in the second half. With Harry Plunkett improving as the game wore on, Furlong's work rate and tackling was inspirational as they came up against an excellent Meath midfield pairing in Sean Emmanuel and Conor Gray. The same was true of captain Cormac Egan, who started and finished brilliantly. He also threatened to carry Offaly to victory in the closing quarter, as he got on the ball, took on his opponent at pace and bounced off tackles. The Tullamore man is a serious operator and he was Offaly's best player on the day. Keith O'Neill was also immense in the Offaly attack. He didn't score from play but he was always a threat and he was a huge loss when he limped off with nine minutes left. Jamie Guing finished the game very well in the Offaly attack.

Offaly sub Patrick Taaffe did very well as he got on a lot of ball and used most of it well from his defensive role. Not everything worked for Offaly and some players struggled to find their A game. They weren't quite good enough and they definitely didn't score well enough, they didn't create and convert enough chances but their effort and commitment was never less than exemplary. Their half forward line didn't create enough in an attacking sense though they were completely honest and worked so hard with Marcus Dalton asked to stop Meath wing back Ciaran Caulfield from flying up the field. The Offaly half backs possibly didn't get forward enough while some questionable refereeing decisions did not help Offaly's cause. They were so close but overall, they didn't play quite well enough, they didn't fully reach their potential.

They had their chances to win, with Keith O'Neill having a great goal opportunity in the first half while the Meath goal was very unfortunate from an Offaly point of view. John Furlong almost won it for Offaly moments into injury time when he made a brilliant run to carve open the Meath defence and his low drive flew agonisingly wide of the right post.

After a tentative opening few minutes, Offaly settled in very well to the game with their defence doing particularly well. They worked hard, tackling well and making good interceptions as Meath found it hard to get going.

A fine third minute point from captain Cormac Egan gave Offaly a third minute lead. Meath equalised through Eoghan Frayne and Offaly then missed two great chances. Keith O'Neill should have done better after getting in on goal in the 7th minute, drawing a good save from Billy Hogan while Cormac Egan was wide from 20 metres to the left of the post.

Meath had more possession but kicked three poor wides with Offaly's pressure telling a tale as the sides were level at 0-1 each at the first half water break.

The first half never really sprang to life, though it made for engrossing, compelling viewing. It was 0-2 each after 23 minutes with Offaly's point coming from a Keith O'Neill free. Meath were the better side after this and two more points from Eoghan Frayne, one free and one “45” had them 0-4 to 0-2 ahead at the break.

For Offaly, there was plenty of grounds for optimism at the break as they were competing well and they were very much in the hunt.

Offaly got one of the points of the game early in the second half as Keith O'Neill brilliantly won the ball and fed his club mate Jamie Guing for an excellent point. However, Meath got well on top after this as their physicality told and they began to break the line and tackles. Eoghan Frayne got a free and Meath made a crucial breakthrough in the 38th minute when Cathal Ryan dropped a Feayne “45” and Liam Stafford blasted to the net.

It remained 1-5 to 0-3 to the second half warer break as Offaly battled with everything they had. They got the break they deserved in the 47th minute with a goal out of nothing. Alex Egan did well to win a mark. His shot tailed to the right and with Keith O'Neill battling for it, Pauric Robbins fired the loose ball to the net – he was replaced less than a minute later, a decision obviously made by management before his goal.

That goal changed the game and Offaly played with great heart. As the inform Keith O'Neill limped off, Jamie Guing stepped up to the plate and he levelled it up with two points, the second from a free as time ticked away. The tension was palpable as the game wound down towards the 60 minutes. Points from Ruari Kinsella and Eoghan Frayne edged Meath two ahead in injury time. Jamie Guing's free cut it to the minimum and it would have taken very little for Offaly to force extra time.

Eoghan Frayne (Meath): A number of contenders with Meath's Sean Emmanuel, Conor Gray and Eoghan Frayne and Offaly's John Furlong and Cormac Egan really stepping up to the plate. You could make a case for any of them but the choice is Frayne. Offaly knew about his potential and the defence worked very hard on him with Tom Hyland doing his utmost. Yet Frayne's six points, two of them from play, was a huge contribution on a day when scores were at a premium and he was a constant threat.

Meath's goal from Liam Stafford eight minutes into the second half was decisive. It came after a defensive error and gave them a 1-5 to 0-3 lead at a crucial stage.

David Fedigan did not please Offaly with a number of his decisions. A number of Meath players took a good few steps with the ball at times while a few quite cynical fouls went unpunished on Cormac Egan as he tried to break the tackle. There were other debatable calls. Some of these balanced out and he did a lot of things right but in such a tight game, everything will be analysed fully and Offaly were not happy with his display.

The quality of Offaly's work rate and tackling. They really gave it their all and while defeat was a bitter pill to swallow and Offaly could have played better in an attacking sense, it was a performance that gives hope for the future.

Cusack Park in Mullingar was in fine condition and it was a perfect evening for football.

Offaly now focus on the 2021 minor championship and a number of players from this team will be involved in that. Meath go into the All-Ireland semi-final.