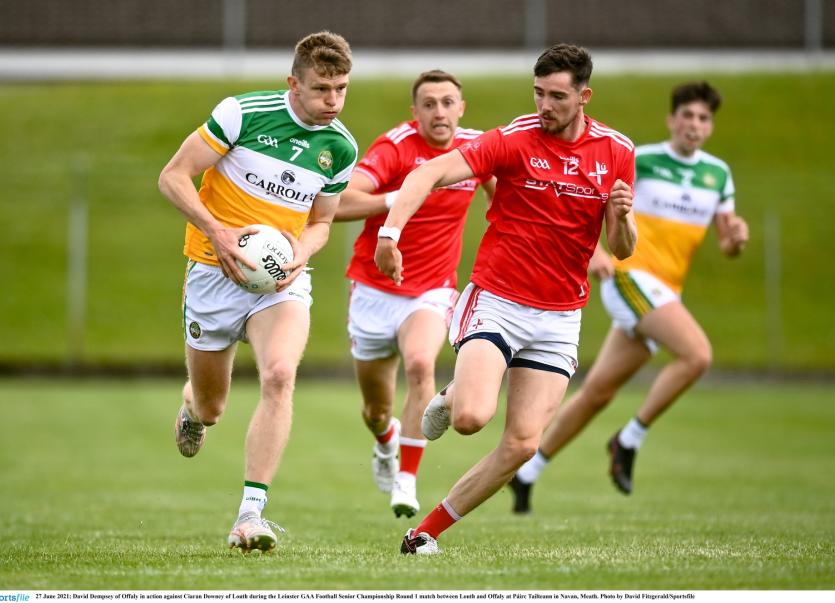 David Dempsey races out of the Offaly defence against Louth.

IT was very much a case of survival of the fittest as Offaly won a thrilling extra time shootout in the Leinster Senior Football Championship first round against Louth in Navan this afternoon.

Offaly really pulled it out of the fire with a storming extra time after they had seen their championship lives flash in front of their eyes in normal time. Over the course of the 90 minutes plus, Offaly were the better side and they deserved to advance to a quarter-final meeting with Kildare.

The final scoreline flattered them and does not reflect how close Louth came to a shock win but Offaly did really well to win this game. They outscored Louth by 2-4 to just 0-1 in extra time with Niall McNamee and Peter Cunningham punching the decisive goals in each period. The underdogs could have been closer as they had some bad misses in the additional time and Paddy Dunican also made a crucial save but Offaly were the fitter team and they really drove at their opponents.

It was a drama packed afternoon and Offaly produced a very disjointed display. They played well in fits and bursts in normal time and were excellent in extra time but their error count was way higher than John Maughan would have wished and they really need to sharpen up a lot of aspects of their play if they are to trouble Kildare in two weeks time.

It was, however, a big win for Offaly after their malfunction in the Division 3 league final against Derry last week. They had a real point to prove after that and their intensity and desire levels were much better here. Louth weren't as good as Derry but Offaly had to perform to beat them and it was a real nip and tuck championship tussle.

Behind by 0-9 to 0-7 at half time, having been ahead by 0-6 to 0-3 at one stage, Offaly played better in the second half and Bernard Allen's goal put them 1-14 to 0-15 ahead. They went three clear but Louth got the three closing points and almost got a winner deep into injury time when Sam Mulroy's shot went wide. It was that close and Offaly almost bowed out as it ended 1-15 to 0-18.

In extra time, however, they were clear masters as Louth ran out of steam and ideas. Offaly's fresh legs made a big difference and they threw caution to the wind to pull away for a deserved win.

Offaly had bitten the bullet before hand by starting the veteran Niall McNamee. Although not named on the starting lineup, it had been common knowledge during the week that he would start. Suggestions that he couldn't last a full game proved way off the mark as he had a sensational afternoon, scoring 1-3, setting up the third goal and having a number of other assists. The Rhode attacker really turned back the clock and Offaly owed a debt of gratitude to his man of the match display.

Cian Farrell was a close contender for man of the match. He was superb for much of the game, kicking seven points, four from play. There were other heroic displays for Offaly. On a day when football was at its most human and players made all sorts of mistakes, Offaly always kept trying and players stood up to be counted at different stages.

James Lalor, David Dempsey and Niall Darby were immense in a defence that was often extended by Louth. Lalor's performance was particularly noteworthy as he had struggled in earlier games but he performed superbly, doing the simple thing well, tackling efficiently and winning all sorts of ball. Ruari McNamee also excelled at times in the Offaly attack, spraying around quality ball before he tired near the end of normal time. Carl Stewart also deserves a special mention. A surprise selection at centre half forward, he was very effective for a lot of this game and the quality of his kick passing set up some scores before he wilted as it wore on.

There was plenty of concern for Offaly, particularly at midfield. Eoin Carroll was left off for this game and came on, doing some good work but finding it tough as well. Peter Cunningham and Jordan Hayes tried hard without dominating for long periods and Cunningham looked much better when re-introduced into the attack in extra time. Anton Sullivan had been taken off in the first half after a few wayward passes and he came back on in extra time where his work rate and energy helped Offaly power home. The introduction of subs was crucial to Offaly survival and while there is loads of room for improvement, individually and collectively, it was a very good win.

While Dublin or the All-Ireland contenders won't be one bit perturbed at what they witnessed, it was an old fashioned, rip roaring championship tie with both sides giving it everything and emptying the tank.

The first half was a very mixed bag for Offaly, who played fairly well for twenty minutes but lost their way badly coming up to the interval.

Offaly were clearly the better side for 15 minutes and deservedly led by 0-6 to 0-3 at that stage. Niall McNamee had popped over two nice points from play, Cian Farrell was lively and dangerous and Offaly looked to be motoring okay. Their error count was a bit high as they carried the ball into tackles and spilt it. This led to two of Louth's points as Ruari McNamee and Colm Doyle lost possession but some of Offaly's passing movements were very good and they looked to have the measure of the Louth defence.

It went wrong after this as Offaly seemed to run out of steam and ideas. Louth got two on the trot before Cian Farrell restored a two point lead with a super point. Offaly really struggled after this, losing their shape as Louth began to take control at midfield. The underdogs had a great sustained spell of pressure that yielded four unanswered points and a half time lead of 0-9 to 0-7.

Offaly had made a big decision before that by hauling Anton Sullivan off in the 29th minute. You could see the logic of management's decision as he had given a few wayward passes, and a couple of them were not the right option. However, he was also working terrifically hard and one long foot pass to Niall McNamee just before he was replaced by Bill Carroll was very unlucky to hit the target. With Niall McNamee having started, it meant that Offaly were down his influence as an impact sub and they were up against it at the break.

Louth extended their advantage to three with a quick Ryan Burns point in the second half but Offaly played much better after this. 0-11 to 0-9 behind after 40 minutes but their work rate, efficiency on the ball and turnover rate was much better. Points from Cian Farrell and Jordan Hayes levelled it up and Niall Darby edged them in front. Dermot Campbell equalised for Louth before Bill Carroll's point put Offaly ahead, 0-13 to 0-12 at the water break.

The closing quarter provided tremendous drama and entertainment as both sides threw everything at each other. Louth were back in front by the 57th minute, Paddy Dunican levelled from a free and Ciaran Keenan edged Louth back ahead, 0-15 to 1-14.

Then came a Bernard Allen goal to give Offaly the initiative After a short kickout by Craig Lynch was intercepted, Niall McNamee's shot was blocked in the 32nd minute and Allen's shot dipped into the roof of the net – he may have been going for a point.

Cian Farrell put Offaly threw clear from a free but Louth hit back with the closing three points to force extra time, 0-18 to 1-15. The last came from a brilliant 45 metre free from Sam Mulroy after Eoin Carroll fouled Ciaran Downey three minutes into injury time. Mulroy had a chance to win it for Louth six minutes into injury time but his shot flew wide of the target, much to Offaly's relief.

Offaly stormed across the line in the second period. Mark Abbott edged them further ahead while Paddy Dunican made a crucial save from Liam Jackson in the 81st minute. A Peter Cunningham goal in the 83rd minute ended it as a contest – the Bracknagh man punched Niall McNamee's centre to the net after Bernard Allen hit the woodwork with a point shot. Eoin Carroll and Cian Farrell (free) added points as Offaly eased home.