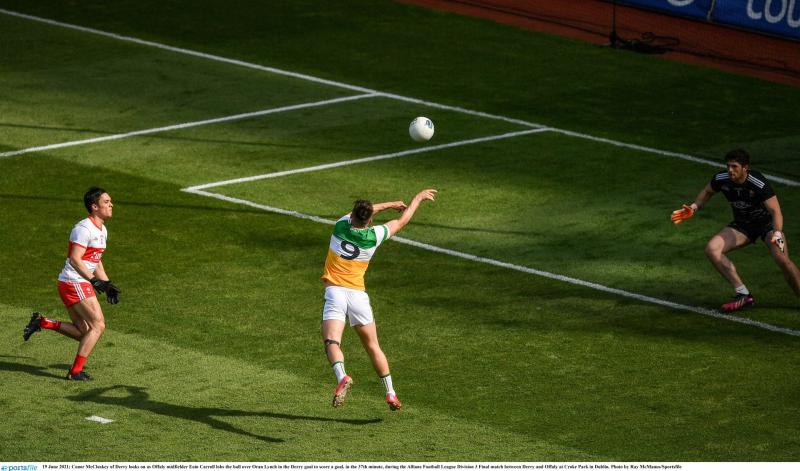 OFFALY were given a hard, sharp dose of reality when they were well beaten by Derry in the National Football League Division 3 final in Croke Park this evening.

It was a very comprehensive beating for Offaly after a substandard performance in which they never really got going and never remotely looked like taking the victory.

In the broader scheme of things, the defeat does not matter. Offaly had produced the goods when it mattered in their group games and last week's semi-final against Fermanagh to book promotion to Division 2 next season and this game was all about experience for them.

With the championship date against Louth looming next weekend, Offaly had the option of not playing this final. They opted to go with it as long as it was played in Croke Park but it is hard to know if there will have been much benefit in this game. The result doesn't really matter and the Louth game is infinitely more important but the manner of their defeat, the way they played will have bitterly disappointed the team and management.

They were never at the races and didn't match Derry's power, pace and hunger. Derry were too physical, too fast for them and the final score line did not flatter them. They were the better side on the day by a huge distance.

Offaly trailed by 0-10 to 1-3 at half time and were lucky to be that close after Eoin Carroll punched an injury time goal. Any hopes that it would ignite an Offaly rally in the second half proved to be ill founded.

They competed all right for a while in the second half without ever convincing that they could win. They got the gap back to three with a quick Niall McNamee mark but Derry were back five ahead within a couple of minutes.

There was still five in it at the second half water break, 0-14 to 1-6 and a victory was technically possible. However, Offaly were playing no where near good enough and Derry pulled out of sight in the closing quarter. Offaly failed to score again as Derry fired over seven points and they missed an injury time penalty with stand in keeper Peter Cunningham saving from Shane McGuigan – Paddy Dunican was black carded for pulling down Jack Doherty and Offaly's quota of subs were used.

It was a fairly bleak evening for Offaly, one with very few redeeming factors. They were flat, lethargic and their energy levels were not right. Maybe it was too difficult to get things back up so quickly after the joy of promotion. That was a huge relief to Offaly, a great achievement, they celebrated it well and this game was a bridge too far for them.

2,400 spectators were allowed into Croke Park for this, the vast majority from Offaly and they didn't see much to please them. Offaly only got 1-1 from play and they came from a midfielder, Eoin Carroll and a defender Jordan Hayes. They had their seven subs introduced by the 53rd minute and it was one of those days where very little went right. They never enjoyed a purple patch, a spell on top and Derry were just too good for them.

Offaly were sloppy at times and they spilled too much ball in the tackle. They couldn't get on the ball around the middle where Conor Glass was superb for Derry and only a couple of players can look back on this with satisfaction. Offaly's two best players were at each end of the field with Eoin Rigney trying very hard at full back as he did well on Shane McGuigan. Cian Farrell was their best forward. While he didn't score from play, he was busy, he showed well and he won hard ball.

Apart from them, some players played okay in fits and bursts without ever achieving the consistency needed to trouble Derry. And many others didn't get up to the pace of the game at all.

The writing had been on the wall for Offaly almost from the throw in.The first half was a real st5ruggle for Offaly who found it very hard to find any real momentum. Derry were the better team by a considerable distance and their half time lead of 0-10 to 1-3 did not fully reflect the extent of their dominance.

A superb injury time punched goal from Eoin Carrroll gave Offaly a lifeline. Carroll showed great awareness to punch to the net in the 35th minute after a fine build up involving Niall McNamee and Ruari McNamee – Anton Sullivan had been taken out of it in midfield by Benny Heron just before that.

Offaly had been so poor that they had been forced to introduce Niall McNamee much earlier than planned. McNamee came on in the 25th minute for Bernard Allen and they did improve with him on the field.

Offaly were strangely lethargic before that as they failed to recapture their earlier form and they couldn't match Derry's power and pace. Carroll's goal was their only score from play in the first half with their others coming from two frees and a mark from Cian Farrell – Farrell was the one Offaly forward to pose any real threat in that first half.

Offaly were fortunate to be still in the game at half time. Derry could easily have had two or three goals. Twice, Derry players were penalised for over carrying with a goal on while they had other decent chances as the Offaly defence creaked at the knees.

Derry led by 0-3 to 0-1 after fifteen minutes and they had eight points on the board before Offaly got their next, a fine Farrell mark. Considering how much they had been outplayed, a four point half time deficit was far from a disaster and Offaly were still alive and kicking.

They never kicked though and were always chasing shadows in the second half. Their heads dropped as it became clear that they could not win and that was another disappointing aspect of the day. Next week's game against Louth is a much more important one and it remains to be seen what impact this defeat has on them – the challenge is to use it to galvanise them but a defeat of this nature is never easy to recover from.