Semi final heartache as Offaly succumb to strong Louth side 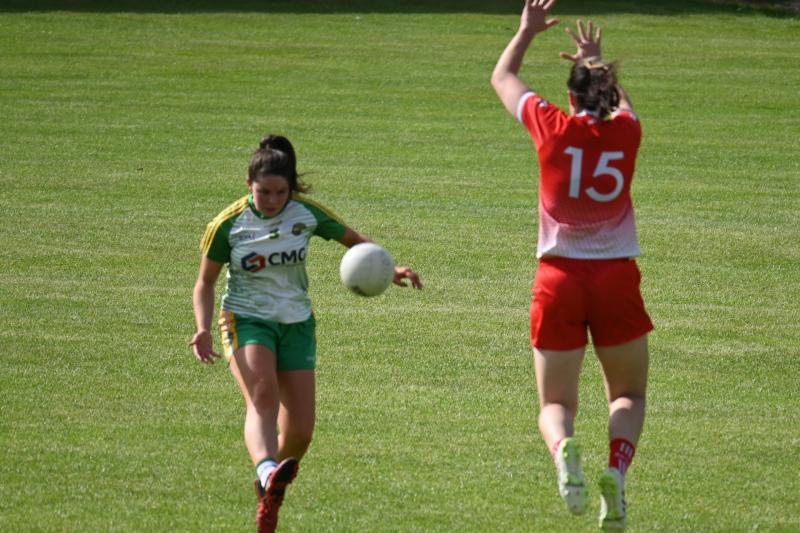 Offaly’s dream of reaching the Lidl Ladies National Football Division 4 final when they fell short to a very strong side on Sunday afternoon last in the sun soaked Clane.

Going into the game on the back of two massive wins over Carlow and Limerick, Offaly certainly went into this clash with a new found sense of self belief and rightly so.

On Sunday, however, they met their match in an extremely slick Louth side and with only six minutes on the clock the Faithful girls found themselves trailing by 1-2 to no score.

In fairness, Offaly battled extremely hard throughout the hour and they certainly gave Louth a few worries, but in the end the old cliché of goals winning games came to the fore.

The game was a mere three minutes old when Louth made their first attack. The side who had recorded comfortable wins over Derry and Antrim on route to Sunday, showed they meant business from the off.

It was a long high ball in from the impressive Lauren Boyle that landed in over the head of Sinead Byrne in the Offaly goal. A dream start to say the least for the wee county and a nightmare for Offaly.

Denise McKenna despite being named at corner forward lined out in the middle of the field and with her first opportunity of a score she duly obliged with a monstrous kick from 30 metres out. Louth 1-1 to no score to the good five minutes in.

Niamh Rice who started ahead of Aoife Halligan added another moment later and it was all looking very worrying indeed for Offaly.

Indeed Louth could have another goal moments later when they had Offaly at their mercy, but Sinead Byrne pulled off a massive save from Lauren Boyle.

With that Offaly started to get into their groove. A foul on Marie Byrne, saw dual star Grainne Egan point.

Then with a moment of magic, Mairead Daly found the aforementioned Grainne Egan and she stitched the ball to the ball of the Louth net. Suddenly one between the sides 1-2 to 1-1 with twelve minutes played.

In the sequence of play for the Offaly goal, Louth’s Eilis Hand received a yellow card, but Offaly just couldn’t capitalise on numerical advantage.

Further scores from Kate Flood, Niamh Rice, Lauren Boyle and Denise McKenna saw Louth 1-6 to 1-1 ahead as the half time break loomed.

Grainne Egan pointed for Offaly once more but it was Louth who had the final say of the half thanks to Lauren Boyle. Offaly five behind at the break 1-7 to 1-2.

Offaly had a massive start to the second half. Mairead Daly who always was a constant threat fired over their third but there was more to come.

It was yet another moment of magic from Grainne Egan and with her second goal of the game, the Louth lead was whittled down to one, 1-7 to 2-2.

Offaly now had the momentum, but they just couldn’t get the rub of the green and with their first attack of the restart Louth got the best possible outcome for them.

Niamh Rice was a handful to say the least and it was her ball in that appeared to be going over the bar. But with Kate Flood on the edge of the square, she rose with her hand and punched the ball to the back of the Offaly net. It was a sucker punch to say the least for Offaly. 2-7 to 2-3 down 35 minutes in.

Further scores from Kate Flood and Lauren Boyle saw their lead stretch to six, 2-10 to 2-4 with fifty six minutes on the clock.

Louth were far from finished and once again it was Kate Flood who had the final say of the game with her second goal. A masterful kick it has to be said.

Offaly battled hard in this one, but in the end it was Louth who booked their place in the final against Leitrim. The final scores reading 3-10 to 2-4.