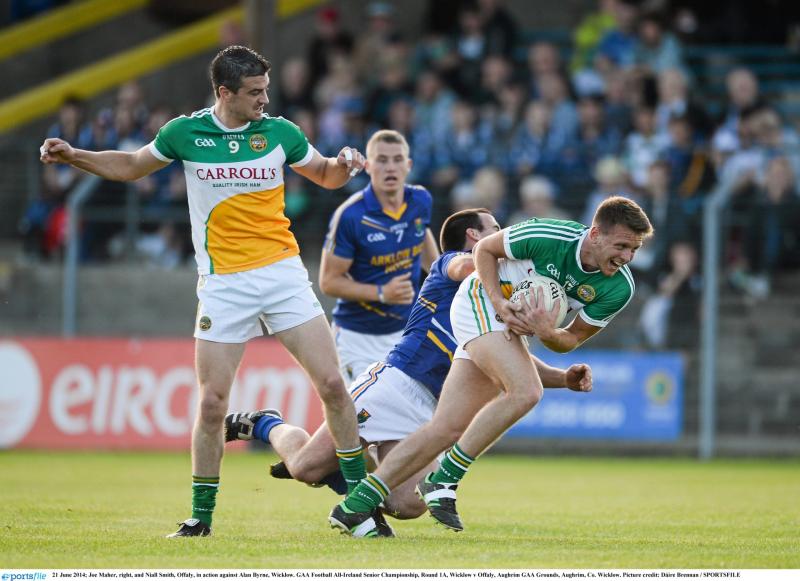 Joe Maher, in action for Offaly against Wicklow in 2014, has been brought back into the panel.

A 34 strong Offaly panel has been selected for the National Football League but it remains “fluid, and open ended”, according to manager John Maughan.

The panel sees Rhode's Niall McNamee commit for another season while there is a return for Ferbane attacker Joe Maher.

Rhode's Conor McNamee and Ferbane's Shane Nally are among the players who have opted out from last year while Tullamore's Michael Brazil is not there at the moment.

A number of the best of last year's U-20s team have been called in by Maughan and selectors. Some featured briefly last year and the young players now on board include Cathal Donoghue, Bill Carroll, Rory Egan, Ciaran Donnelly and Jack Bryant.

There are a few injury worries ahead of the May 15 league opener away to Wicklow. The veteran Niall McNamee dislocated his finger at a recent training session but will be okay. Maughan initially feared that this was a bad injury that could have ended McNamee's season and was relieved to discover it was more minor.

However, the news is not as positive about Ferbane scoring machine Cian Johnson who has had surgery on a gilmore groin injury and is not fit to play at the moment. Johnson is getting ongoing rehab on the injury and Maughan hopes that he will play football at some stage this season.

There is also concern about Cathal Donoghue. The Kilcormac/Killoughey man picked up a worrying looking knee injury at a recent training session and is now waiting for the outcome of a scan to discover the extent of it. A strong running and honest utility player, who has played at midfield for the U-20s, Donoghue's injury is unfortunate as he needs a good spell of county taining to develop further – he gets much less club football in his club, K/K than all his other fellow panelists but has the definite potential to make it at this level.

Defender Joey O'Connor is dealing with an achilles tendon injury at the moment.

The welcome mat has been put out for Joe Maher. Maher has been in excellent attacking form for Ferbane in the past couple of seasons but it looked like he had burnt his bridges with Maughan after not coming on board in his first season in charge in 2019. Maher wanted to be on the panel last year and was not picked by Maughan but is now fully committed. The Mayo man explained: “It was based on performance. I watched a lot of club football last year and on the occasions I saw him play, I said he could offer something. That is what we look at. I am not into the semantics of something or history. I had no axe to grind with Joe. I invited him in two years ago and he couldn't make the commitment. That is fine. He sent out a lot of smoke signals last year that he had the time now and was prepared to commit. He is as welcome back as any of the others.”

There is also a return for defender James Lalor. The Raheen man impressed in the full back line as he made 15 league and championship appearances from 2016 to 2018 but was unable to commit in Maughan's first two seasons in charge. He will increase Offaly's defensive options.

Maughan stressed that the panel is open. “I hope we will have thirty fit lads at any time and if we have to supplement others, we will do so. Guys will always get injured. Last Sunday I was very worried that Niall McNamee had a serious injury. Thankfully and thanks to the staff, a nasty finger injury was sorted very quickly. I thought it was a bad fracture and I thought it would finish him but it turned out to be a bad dislocation.

“Cathal Donoghue went down on his knee and I thought, oh God, his season is over. You would be concerned because lads are so enthusiastic. I know myself how desperate it is when you get a bad injury and how it affects you. You are waiting for so long and you just want to get out to play. The panel will evolve and we will supplement it and bring in players. If we see something exciting, we will jump that person into the squad.”