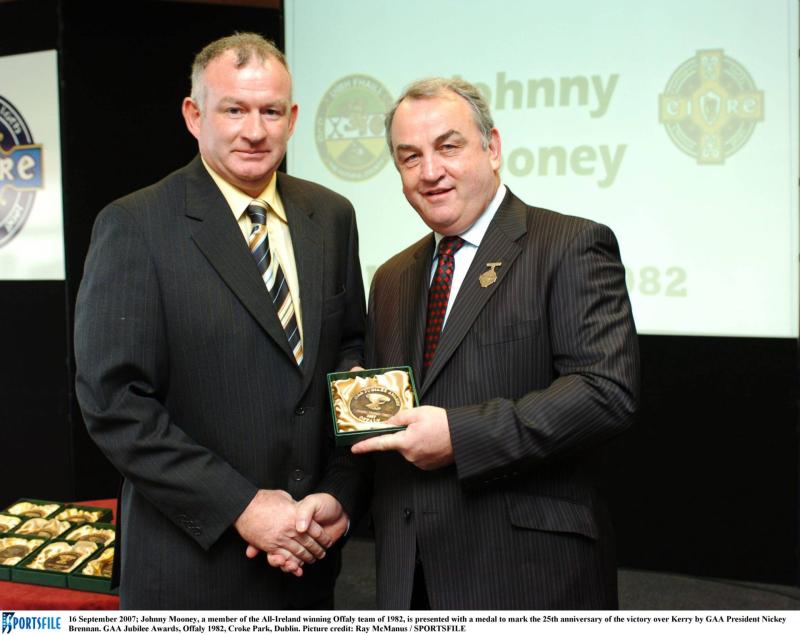 THE Offaly GAA County Board and their supporters club, Club Faithful certainly hit on a master stroke with their recent Grand Canal Walk fundraiser.

The venture has brought in a whopping €208,119 so far and its success has surpassed the wildest expectations of the organisers.

It was a shared fundraiser between the County Board and clubs, though the County Board will have cleared that bit more out of it as chairman Michael Duignan gathered funds solely for them and a couple of other clubs also agreed to give their full proceeds to the county.

With playing activity on a hold because of Covid-19 restrictions, the whole fundraiser provided an enjoyable diversion for people over the past couple of months. County players in both codes and club nominees were asked to raise funds and they would then complete a 5k walk or run on March 27 with proceeds going 50/50 to the Counmty Board and their club.

It was such a simple idea but no one anticipated the manner in which the venture gained momentum and the way that some of the participants pushed it.

It saw social media used at its best and former Offaly football hero Johnny Mooney showed how to utilise this properly. A brilliant forward on the 1982 All-Ireland senior football champions and nominated by his own club Rhode, Mooney brilliantly used Facebook to promote the venture on a daily basis. He personally thanked each donator on Facebook, providing a generous message about their virtues and it worked spectacularly. He got former county footballers from throughout the country to donate but also got people from all over Offaly to support – many of these would be members and supporters of other clubs but they responded positively to Mooney's pleas for support. Respect for Mooney's qualities as a footballer and person were a big factor in this but some people would also have been curious to see what he would say about them and have enjoyed the words of praise.

The result was that Mooney was the third biggest fundraiser, collecting €8,965. Apart from huge support from Rhode and some of his own former Offaly team mates, he received backing from some heroic former footballers from other counties. Among those who backed him were Kerry All-Ireland winning captains, Jimmy Denihan and Tommy Doyle, Dublin's Jack Sheedy, another All—Ireland winning captain Donegal's Anthony Molloy, Wicklow's Kevin O'Brien, Westmeath's Jack Cooney and Denis Glennon, Laois' Declan O'Loughlin, Roscommon's Frankie Dolan, Mayo's Ray Dempsey and many more.

Mooney's posts on Facebook never cease to entertain as he posts promotional stuff about his gardening business, personal comments on issues and local news and pictures and memories of former games and incidents. The following post is an example of the way he utilised Facebook. As the walk took place and money continued to pour in, he wrote: “A most enjoyable walk today on the canal bank. Beautiful sky, nice breeze and sunshine. I took a detour around the Moneen Bog. Both are very important to Offaly people, the canal and the bog. They have helped shape who we are. Along the way I listened to eighties music and finished up with the Offaly Rover ,and Bagatelle's Summer in Dublin: a throwback when Dublin was the capital of Offaly. Great times, great memories when our teams blazed a trail of glory across the land. It's been great connecting with new people on this venture and reconnecting with old friends team mates and opponents. Congratulations to everyone who organised, walked and sponsored with Offaly's best interests at heart. Lines remain open till tomorrow so a big faithful push to finish like we always did. The faithful never die. Thanks JM.”

The biggest fundraiser was former Offaly hurler Brendan Murphy who also raised for his club Ballyskenagh/Killavilla. A doctor based in Ballyskenagh, Murphy collected a remarkable €17,450, getting a lot of support from Tipperary, whom he has worked for as their senior hurling team doctor and still has that role. The ability of some walkers to get support far beyond county boundaries and from people who wouldn't normally support GAA fundraisers was instrumental in its success.

Michael Duignan was the second most prolific fundraiser, getting €12,541 with people supporting from all over the country, including several high profile former players.

While it is important not to get carried away about what was just a very successful fundraiser, it does show the power the GAA has in Offaly, the type of interest that exists in it and the desire among people to improve playing standards across the board and this is something the County Board will be trying to tap into in a variety of ways in the coming years.

1 - Name the Offaly man who had two penalties saved in the 1994 Leinster Senior Football Championship?

2 – Name the father and son who were involved as manager and player in the 2008 Senior Hurling Championship?

3 – How many Leinster senior football titles have Offaly won?

Answers in the next column. With thanks to former referee Carthage Buckley for supplying the questions and answers.