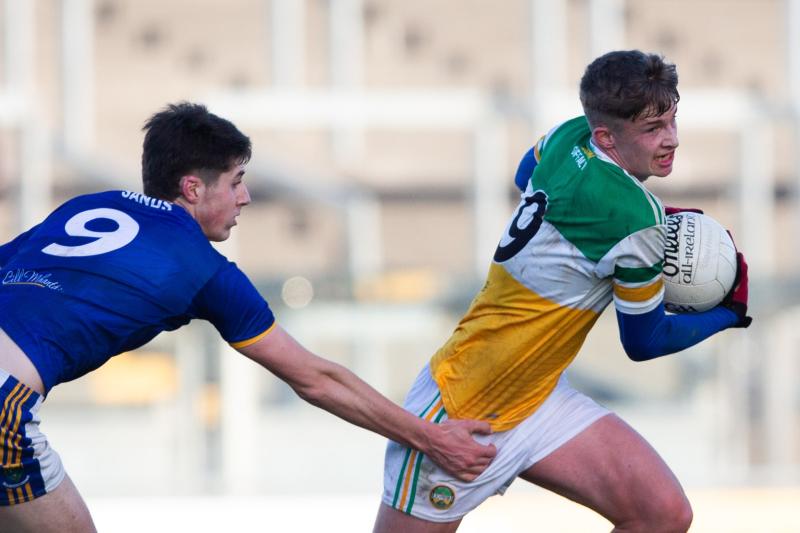 A Leinster minor football final to look forward to for Harry Plunkett.

THE Leinster Minor Hurling and Football Championship finals have been fixed for successive days on the first weekend in January.

The Leinster Minor Hurling Championship final between Offaly and Kilkenny is in Portlaoise on Saturday, January 2 at 2.00pm.

The Leinster Minor Football Championship decider between Offaly and Meath is on the following day, Sunday, January 3 at 2.00pm in Dublin's Parnell Park.

Both finals had originally been pencilled in for Sunday, January 3 but Offaly's presence in the two of them has resulted in a change of plans.

It means another gruelling weekend for dual star Cormac Egan. The Tullamore flier has been in great form in the attack for both Offaly minor footballers and hurlers. He is the minor football captain and has become well accustomed to playing games on successive days in recent weeks – Offaly played Wicklow and Kildare in football and hurling two weekends ago while they played Kildare and Westmeath in the two grades last weekend.

The order will be flipped for the finals, however – the Leinster football quarter and semi-finals took place on the Saturday with the hurling on the Sunday but the minor hurling final is on the Saturday.

The key for both managers is to manage Egan's work load. He carried a leg injury into Sunday's minor hurling semi-final win over Westmeath but still contributed very well, setting up a first minute goal and scoring a fine second half point – he also helped set up a goal and scored a point in the superb minor football win over Kildare on Saturday. The son of a Banagher father and Shannonbridge mother – his uncle is a former Offaly footballer from the 1990s, Mick Devine -, his lightening pace and direct running is a great asset to both teams.

“He is a good lad and he looks after himself very well. He is an athlete and is doing all the right thing. He eats well and is one for the future in football and hurling. Another potential Liam Currums,” remarked Offaly minor hurling manager Leo O'Connor on Monday.

Offaly have another dual player in Belmont's Patrick Taaffe. Taaffe missed last weekend's action after sustaining a broken jaw in an incident that saw a Kildare player red carded in Offaly's Leinster minor hurling quarter-final win. A very effective corner back on the hurling team, he came on as a sub in the minor football win over Wicklow the same weekend but will now miss both provincial finals.

* See Tullamore and Midland Tribune on Wednesday for more.