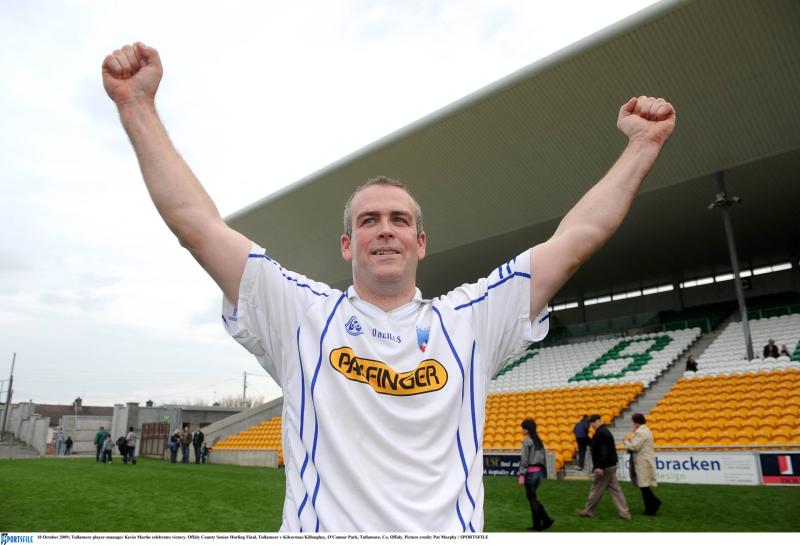 Kevin Martin after guiding Tullamore to a famous SHC win in 2009.

TULLAMORE have turned the clock back in a bid to arrest their decline in hurling by appointing Kevin Martin as their senior “B” hurling manager for 2021.

An Offaly hurling hero during the 1990s, Martin was the manager when Tullamore stunned the Offaly hurling world by winning the Senior Hurling Championship in 2009 – then very much in the veteran stages of a long career, Martin also made a valuable contribution to that win as a player. Tullamore's success came as a surprise to most observers as they steam rolled Kilcormac/Killoughey in the final, winning by 2-12 to 0-11.

It was Tullamore's first senior hurling success since 1964 and Martin's contribution, both as manager and a player, was absolutely pivotal to it.

He has been Tullamore's greatest and most successful hurler – a brilliant wing back as Offaly won the All-Ireland Senior Hurling Championship in 1994 and 1998, he won All-Star awards both years.

After hanging up his hurl in the early 2010s, Martin subsequently went into inter-county management, taking charge of Westmeath and then Offaly. His Offaly reign, however, didn't end well. Offaly were in an almost irreversible decline when he took over and he was ousted as manager during the 2019 season after they lost their opening two games in the Joe McDonagh Cup. Offaly hurling legend Joachim Kelly was appointed as interim manager but couldn't prevent relegation to hurling's third tier, the Christy Ring Cup – with Kilkenny hero Michael Fennelly at the helm this year, Offaly suffered a bitterly disappointing defeat at the hands of Down in the Christy Ring Cup semi-final this year.

Martin takes over Tullamore at a time of great transition for them. Relegated from top flight hurling a couple of years ago, they were very disappointed to lose to Drumcullen in the Senior “B” Hurling Championship semi-final this year – the two finalists, Drumcullen and Kinnitty are now promoted to senior and Tullamore had their sights set on that.

Another local man, Niall Stack has been reappointed as the Tullamore senior football manager. Stack guided Tullamore to the final this year, where they were beaten by Rhode, almost succeeding in a late smash and grab raid in a game that they were outplayed in for long periods.

It will be interesting to see how Tullamore manage their dual commitments this year. They have a few players who play both codes and there were occasional clashes with then senior football manager Phil O'Reilly during Martin's last term in charge of Tullamore hurlers.

Martin was actually an excellent footballer during his own playing career. While hurling was very much his game of choice and he opted to concentrate on this, he was not far off from being a county standard footballer. He generally only came back playing football when Offaly's hurling season was over but he made a crucial contribution to Tullamore's Senior Football Championship wins in 2000 and 2002, scoring the decisive goal in the 2000 final against Shamrocks as they bridged a long twenty three year famine.

His services were sought after by Offaly football manager Tommy Lyons in the late 1990s but he didn't bite the bullet, opting to concentrate on hurling.

As a manager, Martin has also demonstrated a strong belief in players concentrating on one code and there was controversy during his term as Offaly manager when members of his senior hurling squad declined to play in the early rounds of the club football championship in 2018. This decision was greeted with anger by their clubs though the Offaly GAA County Board subsequently insisted that the manager hadn't stopped them from playing and said it was each player's individual choice.

Martin replaces a former playing colleague, Nigel Mannion who stepped down in the wake of the Drumcullen defeat and his target in 2021 will be victory in the Senior Hurling Championship.