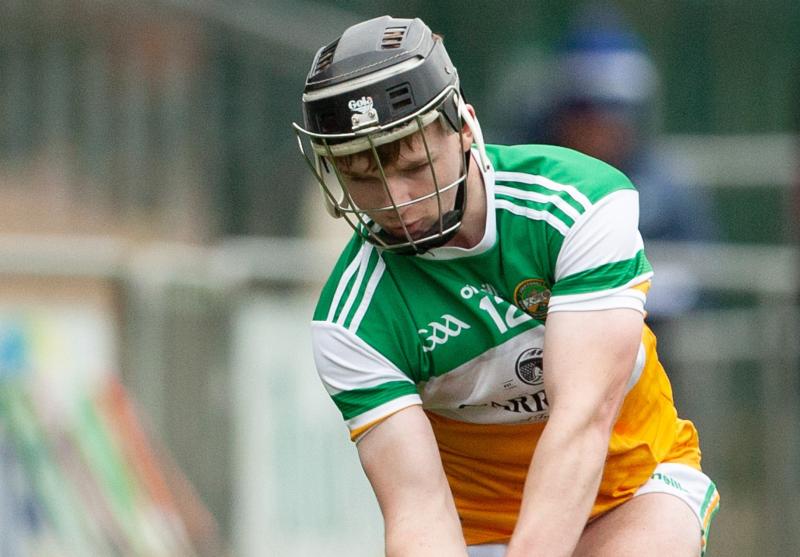 A SENSATIONAL 1-15 without reply after a very sluggish start saw Offaly steamroll their way into the Leinster Minor Hurling Championship semi-final in Newbridge today.

Finding themselves 0-4 to 0-1 behind after twelve minutes, it looked like it could be one of those days for Offaly. They started so badly, struggling to find any momentum and with their touch and intensity well below the levels reached in their impressive first round win over Laois – Kildare were clearly the better side early on and it looked like they might be able to repeat last year's win over Offaly.

Then the game changed almost in the blink of an eye. Birr protege Lochlann Quinn (a nephew of the late Adrian Cahill), got two opportunist points from play as Offaly trailed by 0-4 to 0-3 at the first water break. After that water break, Offaly went on the rampage – the water break may have been a factor but Offaly had begun to change the game's flow before that anyway.

They scored seven on the trot to lead by 0-9 to 0-4 at half time with Quinn getting six frees after the water break – he had missed a couple in the first quarter.

Offaly showed no mercy in the second half, going for the jugular and displaying a great work ethic all over the field. They scored 1-8 without reply in the first 21 minutes of the second half and Kildare's goose had been cooked when Charlie Sheridan got a red card in the 43rd minute after swinging the ball at Patrick Taaffe, who went off injured.

The goal came in the 47th minute with Cormac Egan applying the finish touch from close range and it was the 51st minute before Conn Kehoe got Kildare's next point, a “65” - that was their first score since the 12th mintue and the manner in which Offaly wrestled control of the game was really extraordinary to behold.

Kildare outscored Offaly by five points to two in the closing fifteen minutes but at that stage, they were only fighting for their pride and it didn't matter – the Kildare manager had summed up their predicament at the second half water break when he urged his charges to ignore the score board and keep fighting.

It was a very good win for Offaly, who are clearly motoring well and moving in the right direction. No one will get carried away with a win over Kildare but Offaly had lost to them last year and their appetite for battle, their willingness to work and keep going, even when things go wrong, was a pleasure to watch.

They are very much a work in progress with plenty of room for improvement and a long road ahead but so far, they have done everything that can be asked of them – and there is clearly a lot of work going on with their touch and ball handling while they are playing to a plan and sticking with it.

It was a collectively very solid display here with every player working hard but there were plenty of standout individual performances.

Lochlann Quinn top scored with ten points, three from play and some of his shooting from long range frees took the breath away – he also contributed well in general play and he is developing into Offaly's main man.

There were other heroic performances and Oisin Kilmartin, Luke Watkins and Sam Bourke should take a bow in a very hard working defence who never really put a foot wrong. Kilmartin did the unseen thing very well, getting in important hooks and blocks, mopping up loose ball and one rob early in the second half to stop Kildare getting in on goal showed how effective he was.

Watkins and Bourke were immense on a half back line where Ruari Dunne also did well, before going off after getting the belt that resulted in Sheridan's red card Watkins and Bourke brought great physicality to the table.

Cathal King had another excellent game at midfield, covering vast ground and using the ball very well while Colin Spain came into his own as the game wore on. Luke Carey was also wonderfully sharp in the attack and he was especially productive in the second quarter when Offaly needed leaders to step up. Charlie Mitchell showed great characer to play himself into the game – he missed chances and things just didn't happen for him for a while but he kept plugging away and caused Kildare a lot of problems in the second half. He scored two points and set up the goal. Joseph Hoctor also finished powerfully, with two points, after toiling very honestly before that.

Offaly struggled early on and Kildare were the better team in the opening quarter. They were that bit sharper and converted more of their chances. Kildare fully deserved to be 0-4 to 0-1 up after twelve minutes and it was looking onimous for Offaly as they were making plenty of mistakes. Their touch wasn't quite sharp enough and Kildare seemed to be working that little bit harder.

They had a couple of bad wides, Charlie Mitchell mishit a chance and Lochlann Quinn was wide with a couple of long range frees that he had been converting in the opening round win over Laois.

Quinn, however, did find the target with two fine points from play to leave Offaly 0-4 to 0-3 behind at the first water break.

Those two points Quinn changed the game quite spectacularly as his confidence grew in their wake and he got his eye in from placed balls. In the second quarter, Quinn converted six frees from a variety of distance and angles – a couple of his long range ones were sensational as Offaly went in at half time with a very healthy lead of 0-9 to 0-4.

It was a fair turnaround and Offaly's work ethic and general play was of a much higher order in that second quarter with Kildare struggling to get the ball forward to their attack.

Offaly continued where they left off in the second half as things went to bad to worse for Kildare. Quinn continued to float over frees as well as getting one from play while Luke Carey, Cathal King and Charlie Mitchell (2) also scored as Offaly went 0-16 to 0-4 ahead. Kildare's afternoon nose dived in the 43rd minute when Charlie Sheridan was red carded, apparently after hitting the ball at Ruari Dunne after Kildare had won a 20 metre free in – Conn Kehoe went for goal from the free but it was saved.

A 47th minute from dual player Cormac Egan ended it as a contest – the Tullamore man tapped home after Joseph Hoctor's shot was saved following great approach play by Charlie Mitchell. Kildare finally ended their scoring famine wityh a 51st minute point from a Conn Kehoe '65' – Offaly had scored an incredible 1-15 without reply.

Kildare went on to score four on the trot before Offaly settled down again but by this stage, the visitor's win was a done deal and they can now approach the semi-final with great optimism.