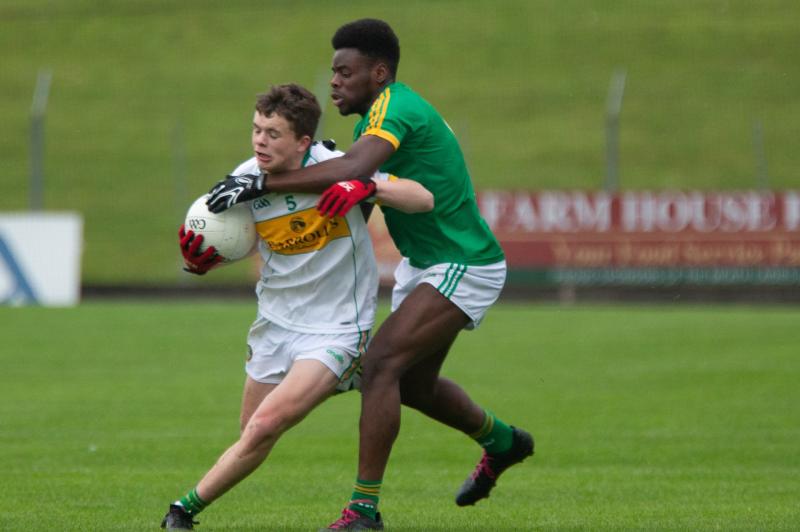 John Furlong had a good game for Offaly,

IT was far from as simple or straightforward as the final scoreline might suggest but Offaly still did really well to advance to a semi-final meeting with Kildare when they got the better of Wicklow in the Leinster Minor Football Championship in Bord na Mona O'Connor Park.

In an engrossing, compelling game of football between two very honest sides, Offaly rallied superbly in the closing quarter to wrestle back the initiative in a match that looked to be slipping from their grasp in the third quarter.

While it took an injury time Alex Egan goal to give them a 1-4 to 0-4 interval lead, Offaly had been clearly the better side in the first half and should have been further ahead.

However, they floundered badly in the third quarter as Wicklow took control all over the field. The visitors levelled it up with four of the next five points, 0-8 to 1-5 and Offaly just couldn't get their hands on the ball. A black card for Wicklow's Tom Keogh was a crucial moment and by the time he came back on in the 53rd minute, Offaly had steadied the ship and were playing better football.

They were still only a point ahead at that stage but a point and then a goal from captain Cormac Egan put them 2-8 to 0-9 ahead and there was no way back from Wicklow with time drifting away.

It was a very close run thing though, much closer than the final scoreline indicates and Offaly were relieved to hear the final whistle. It was fitting that Egan should get those decisive late scores as he produced a man of the match performance. While centre half back, Cathal Ryan and forwards, Jamie Guing and Keith O'Neill were outstanding with O'Neill displaying tremendous skill and movement and Guing taking four great opportunist points, they floated in and out of the game. Egan was a constant terrier like presence and his work rate and turnovers, both in attack and when he channeled back, proved inspirational at a time when Offaly were crying out for leadership. His option taking could be a bit better at times but Egan's pace, drive and work was instrumental in Offaly's win.

It was a good solid performance by Offaly and this team have decent prospects. They have a great honesty and plenty of skilful, exciting players. They did have periods where they struggled and there is plenty of room for improvement but the raw ingredients are there.

Apart from the above mentioned quartet, there were plenty of other good displays. Tom Hyland and Geordi O'Meara impressed in defence and John Furlong and Harry Plunkett had very good spells at midfield. The Tullamore duo are a good mix with Plunkett's silky skills and Furlong's presence and work rate allowing them to dominate for good spells, though they were out played in that third quarter.

Alex Egan also had a productive afternoon in attack, getting a goal and a point before being replaced and overall, it was a satisfactory display by Offaly – albeit, one that no person can get carried away with.

The first half was a strange sort of affair and it took an excellent injury time goal from Alex Egan to give Offaly a 1-4 to 0-4 half time lead. Egan stroked home from ten metres, picking his spot after the Wicklow defence opened up in front of him and Offaly deserved to be ahead at the break.

It was clear from the start that Wicklow had a decent team and would make life very difficult for Offaly. However, their four points all came from Eoin Doyle frees and the Offaly defence was generally on top – working hard and tackling efficiently to deny them clear chances.

With Cathal Ryan immense at centre half back and John Furlong and Harry Plunkett exerting an almost understated control at midfield, the Offaly attack receiced a plentiful supply of quality ball. They were very close to clicking into top gear but it didn't quite happen for them. Keith O'Neill was outstanding, scoring three opportunist points and showing fantasic skill but Offaly missed quite a few chances.

They had a number of very skilful players with plenty of flair up front and a willingness to take on and beat their man but the finishing was missing.

It was tight on the score board all the way through the half with never more than a point separating them until Egan's goal. The sides were level on four occasions in the first half but Offaly had a particularly wasteful spell when 0-3 to 0-2 ahead. They had a sustained spell of pressyure but missed 2-3 in this spell with Keith O'Neill, Harry Plunkett and Jamie Guing having wides while a Guing goal was disallowed for a square ball – the Clonbullogue man could have avoided drifting into the square.

A Keith O'Neill half goal chance was blocked while later on in the half, a snap shot from the very lively Cormac Egan flew wide across the face of goals. Two Doyle frees had pushed Wicklow ahead before Keith O'Neill equalised and then Alex Egan got that crucial goal.

Offaly extended their lead early in the second half with a Jamie Guing point but were then forced onto the back foot by a resurgent Wicklow. Completely dominating, Wicklow scored four points on the trot to level it up by the 41st minute and would have been ahead had a Eoin Doyle free not dropped centimetres short. Offaly were in trouble but a black card for Wicklow corner forward Tom Keogh after he needsly hauled down Alex Egan in the 43rd minute took the wind out of their sails and an excellent Jamie Guing point settled Offaly and gave them a 1-6 to 0-8 lead at the second half water break.

That black card was a pivotal moment in the game as Wicklow never really got going again and Offaly rallied very well in the closing quarter. After the water break, Alex Egan extended their lead and Liam O'Neill cut it to the mimimum in the 50th minute. That, however, was Wicklow's final score and Offaly finished powerfully with Cormac Egan leading the charge. He tapped over a 54th minute point and his superb 57nd minute goal ended it as a contest.