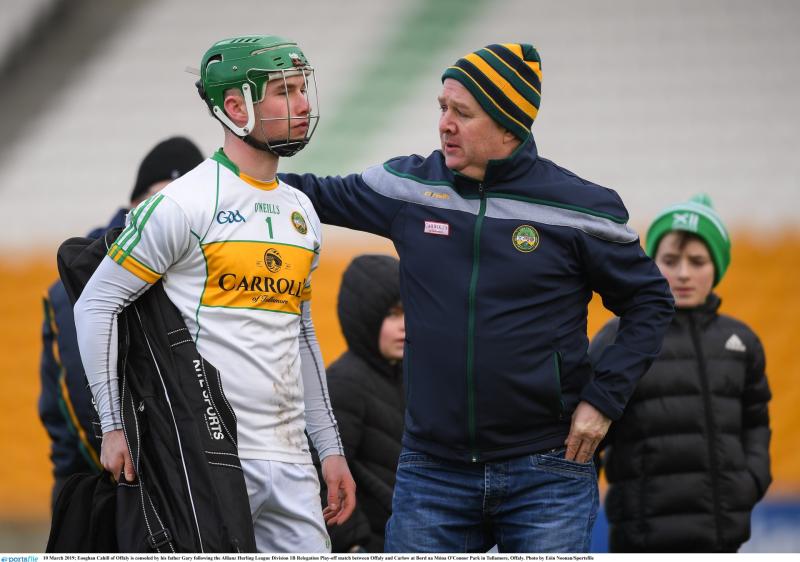 Gary Cahill with his son Eoghan.

IT has been a very tough few weeks for Offaly U-20 hurling manager Gary Cahill, one that has put the GAA and hurling very much into perspective as they gear up for Saturday's Leinster U-20 Hurling Championship quarter-final against Dublin in Birr..

The Birr man was in Newry after watching his son Eoghan playing a starring role as Offaly beat Derry in the Christy Ring Cup when he got a phone call informing him that his brother, Adrian had died suddenly in Lanzarotte.

Eoghan Cahill had shot the lights out that day, scoring seventeen points with four of them from play and as Gary stated this week, “It was a very long journey home”, after getting the news that everyone dreads.

Despite being three years older than Adrian, Gary Cahill had played on many of the same underage teams as Adrian back in the 1980s into the 1990s, including U-21 and they continued playing adult hurling together for Birr and Offaly.

Adrian Cahill was one of the most gifted Offaly hurlers in that era and while he didn't go onto win the All-Ireland senior medals and All-Stars that his talent merited and that many of his colleagues achieved, he left behind a treasure throve of memories.

Adrian had been very proud of the progress of Eoghan Cahill and another nephew, Offaly minor hurler Lochlann Quinn and Gary Cahill revealed this week that hurling has helped him to deal with the grieving process.

“I'll be honest with you, our family is a hurling family and it is not ideal but it is great to have this. It will be the first county game in Birr since Adrian died and there would be no better way to remember Adrian than to turn one over Dublin. It is great to have this two-three nights a week.”

He spoke with appreciation about how members of the Offaly U-20 hurling squads rallied around him in the lead up to and over the funeral period. “In fairness, lads from the U-20 and senior squads were so good to us and it really bonded us together.”

The memory of that phone call in Newry won't leave him. “It brings everything back to life really. The whole way up, Adrian was mad for hurling and for me to hear the news in a hurling venue puts things into context. There is a lot more to life than hurling.”

Cahill is also appreciative to his fellow Offaly U-20 selectors, Adrian Clancy (St Rynagh's) and Shane Hand (Kilcormac/Killoughey) for the support they gave him and the work they did in organsing training and online coaching for the squad.

It has been a crazy year for the GAA and this championship has been typical of the challenges. Delighted to get the news that it would be going ahead a few months ago, Offaly rallied well to beat Westmeath in their first game but the championship was then put on the long finger as Covid-19 figures climbed in the country.

Offaly have only resumed collective training a little over a week ago and it leaves Cahill very uncertain about there they stand. “It was very frustrating. Lads did their own work but you really don't know where they are. It depends on what happens on the day. Working on your own is not the same, there is no practice matches, no hurling. ”

Fate has also been cruel to Offaly. They were without three key players, Durrow's Brian Duignan and Ross Ravenhill and Shinrone's Killian Sampson for the Westmeath game because of Covid-19 protocols. They will be back for this but Offaly will be without ace forward Luke O'Connor – the St Rynagh's man is getting a knee operation this week and won't be playing again until the end opf January-February.

Kilcormac/Killoughy's Cathal Kiely is also a major doubt with a groin injury and while he has an outside chance of featuring, Cahill was downbeat about his prospects.

He was happy that Offaly did what they had to do against Westmeath. “When we look back on the Westmeath game, you have to remember that lads walked into the dressing room and learnt that three of their senior players (Duignan, Sampson and Ravenhill) were ruled out. We started very shaky and were quite poor for the first twenty minutes. We came into it then and exceptional performances from one or two lads got us home.”

Cahill is glad that this championship is resuming even though Christmas is looming. “I am glad that it is going ahead, even for the younger lads,” he said, pointing out that many of this group lost out when minor was changed from U-18 to U-17. He believes that lost year has had repercussions for Offaly hurling, stating that the current county senior panel has a bunch of players at 23 years of age and a couple 21 but none 22. “It shows that losing out on a year like that doesn't serve Offaly hurling well,” he declared.

Offaly had a great win over Dublin in last year's championship and Cahill is hopeful of a repeat performance. “A hurling match is a hurling match and the potential is always there to win. The stop-start nature does not help any team but let's have a crack at it and see what happens.”