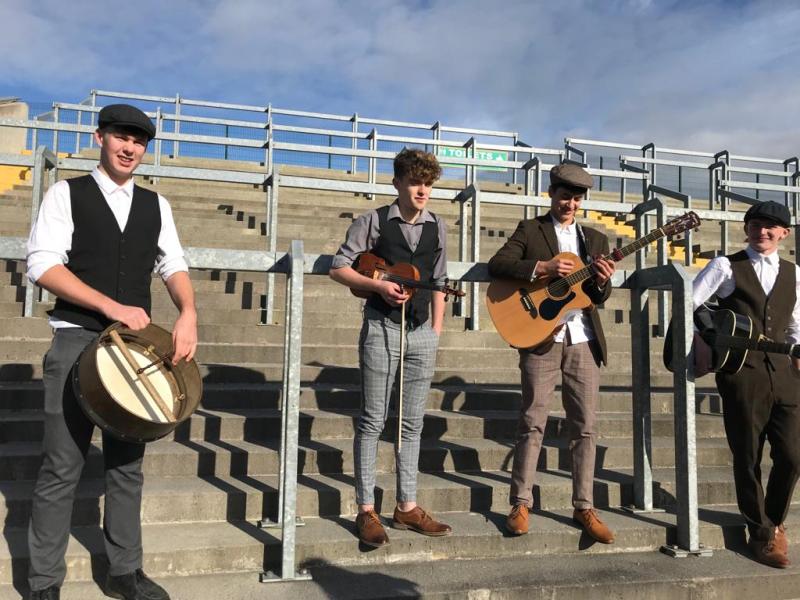 THE GAA's Bloody Sunday has been commemorated in a powerfully evocative and moving fashion by a group of students at Colaiste Choilm, Tullamore.

“Bloody Sunday 1920”, a moving song about the notorious 1920 massacre at Croke Park, has went viral since being published on social media forums last weekend. A collobarative effort from a number of last year's history students and their teacher, Charlotte Farrell in Colaiste Choilm, the song was produced by four students: Brian Whittaker (16 years of age), Killeigh; Sean Brady (16), Killeigh; Darragh Ryan (17), Kilcavan and Mikey Thornton (17), Tullamore.

A very catchy tune with tremendous background music, the song was first recorded in Joe Egan's studio in Clara and then a video was taken of it being performed in O'Connor Park, Tullamore – the green, white and gold Offaly coloured seats provide a particularly apt background for a song that captures so much of the essence of what it means to be Irish.

The whole setting and recording just took the breath away when viewed and unsurprisingly, the song has really gained traction – by last weekend, it had over 20,200 viewings and it was expanding by the hour – since being released on the Colaiste Choilm Facebook last week. Among the many retweets was one by Louise Hogan, a grand niece of Tipperary player, Michael Hogan who was shot dead that day.

With the four musicians decked out in 1920 type attire and moving to various positions in an empty O'Connor Park, the song has been a labour of love for over a year – the Covid-19 lockdown that saw schools shut put the brakes on it but they finished off their project this year.

This year is the 100th anniversary of Bloody Sunday, which took place on November 21 1920 during the War of Independence – more than thirty people were killed or fatally wounded when members of the Auxiliary Division and the RIC indiscriminately opened fire at a football match between Tipperary and Dublin as revenge after 14 members of the British Army's “Cairo Gang” had been killed or mortally wounded earlier that day in an Irish Republican Army operation spearheaded by Michael Collins.

A series of events have been organsied by the GAA to commemorate the Croke Park tragedy this year and fittingly, Tipperary have reached the Munster football final and where they will play Cork, almost to the day of the 100th anniversary this Sunday – an excellent documentary on Bloody Sunday was also aired on RTE on Monday evening.

The wheels were put in motion for the Tullamore students' own special commemoration last year as part of Charlotte Farrell's Transition Year history module in the school. With history and religion teacher, Charlotte Farrell driving the project forward, the class decided to commemorate Bloody Sunday in song – not everyone in the class was interested in music and a core group of 12 students formed a committee.

They researched all aspects of Bloody Sunday, combining to write the excellent lyrics and from that group, the four most musically talented spent hours practicing singing and putting music to the song.

They had plenty of work done before the Covid-19 shutdown changed life for everyone and the project was parked until schools reopened this September. By this time, they were in fifth year and ironically, the four students had opted out of history – the Colaiste Choilm curriculum presented a choice between history and music and they opted to pursue their musical passion.

The quartet have been playing music since their early National School days and have different ambitions in this area as they close in on their Leaving Certificate. The lead vocalist in Bloody Sunday is Brian Whittaker and the accompanying music is provided on a variety of instuments by the other three.

They wanted to convey a balanced perspective on Bloody Sunday and keen to ensure that it didn't turn into another anti-British anthem, the first verses outline the build up to the Croke Park atrocity and the assassination of the occupying forces' spies.

They ticked a number of boxes during the process and with the lyrics. Bloody Sunday was essentially a massacre of innocents going about their fun and playing games on their day of rest. Formerly Tullamore Christian Brothers School, Colaiste Choilm still retains a Catholic ethos and this is touched on with the chorus: “Oh Sunday was the day of the blessed, Dublin Tipp strived to be the best, Blood is on the British hands, As bullets are fired on to our lands, 14 innocents were shot down, by the forces of the crown, Those souls we will pray, Who died on Bloody Sunday”.

They were also very conscious of the importance the GAA plays in Ireland and they are passionate GAA members themselves. Sean Brady and Brian Whittaker play underage football and hurling with Na Fianna as does Mikey Thornton with Ballinamere/Durrow while Darragh Ryan plays underage football with Kilcavan. Charlotte Farrell also comes from a powerful GAA background and her father Padraig is a former Offaly minor and U-21 football manager while he managed Tubber in the Senior “B” Football Championship this year.

They took their inspiration from other songs that capture the emotion of tragic events while stirring the senses with music that makes you just want to move and sing – songs like Grace and the Green Fields of France were among the famous Irish ones they studied.

Their initial ambitions were mild: to enrich their own understanding with the project and raise awareness of what happened on that dreadful day. As Brian Whittaker remarked last week, not many people are aware that one of the dead, Jerome O'Leary was just 10 years of age. “It was so sad,” he said.

They tell of the death of Tipperary player Michael Hogan and the naming of the Hogan Stand for him when it was built four years later. Charlotte Farrell spoke about how enjoyable it was to learn history while producing a song and the passion of all involved was very evident as they discussed the project last week.

“The Two Johnnies” were among the people who shared it as it went viral last week and they hope that it will gain further attention in the coming days and perhaps get the thumbs up from a big name.

The Covid-19 regulations has complicated matters for them – in a different year, they would probably have been invited to sing it at the Munster football final, a day when Tipperary will be wearing special Bloody Sunday commemoration jerseys, but strict guidelines that limit movement and attendances, means that is not feasible at the moment.

They are still very happy with the way things have went and the richly deserved plaudits that have come their way since it was released for wider public consumption. They are grateful to Tom Moloney and Jim Kelly for facilitating the O'Connor Park recording; to Colasite Choilm Irish and Geography teacher, Sorcha Ni Oistin, who did a very professional video of it on her phone and to school principal Tadgh O'Sullivan for believing in and supporting the project.

It took a lot of practice and time as they finalised and learnt the lyrics and decided on the final musical airs to accompany it – there was a lot of tweaking and changing before they finally settled on the final product.

The quartet are very proud of their Irish heritage and they spoke with great enthusiasm about Bloody Sunday and its impact on that and later generations. The song was mastered in New York and they hope to get it published on Spotify in the coming weeks.

They also learnt important life lessons about perseverance and sticking with a task during the process. Charlotte Farrell remarked: “The boys didn't expect it to be that good.”

Charlotte always believed in the project and she said: “This shows what self belief and perseverance can bring.”

Sean Brady commented that they didn't think it would happen but Ms Farrell kept encouraging them while Mikey Thornton spoke about how interested they are in learning about the past and Darragh Ryan talked about the Hogan Stand being built and named.

Irish War of Independence was underway,

And it had reached its day,

21st of November, a dark and dreary day,

Squad assassins at the ready,

Men walking along all ready,

To ensure the Irish rise

Oh Sunday was the day of the blessed,

Dublin Tipp strived to be the best,

Blood is on the British hands,

As bullets are fired on to our lands,

14 innocents were shot down,

by the forces of the crown

Those souls we will pray

Who died on bloody Sunday

There’s a whisper in the Croke Park breeze

Reminds us of our children’s screams

For our sons and daughters in the morning skies.

Corner back playing for his home,

We remember him forevermore,

Killed by the bold,