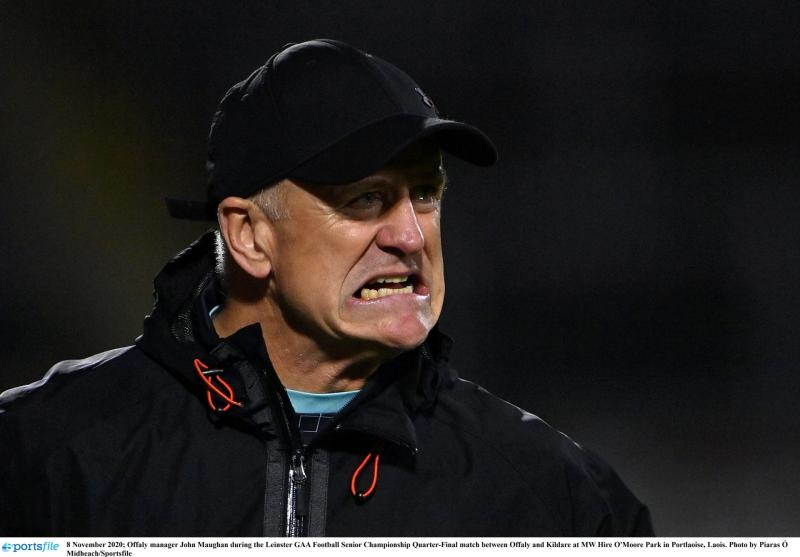 A FEW minutes after a devastating defeat is certainly not the time to be making any big announcements but John Maughan was not giving much away when asked about his future following Offaly's Leinster Senior Football Championship defeat by Kildare on Sunday.

Offaly competed really well as they went down by four points, 0-20 to 0-16 and they were not far away from a shock defeat. As the Mayo man fielded questions about Offaly's brave performance, it inevitably swung to his future.

Now in his second year as Offaly manager, Maughan spoke once again about the strain of travel from his Castlebar home to Offaly and other venues for games.

“I don't really know. It was a long shift today and it will be late when I get home. I work as well and this is a hobby. It is a big drive from Castlebar. I don't know. You have to be wanted as well. In this game there is no such thing as a contract, you just roll along and see how you feel. You talk to the County Board and see do they want you. There is a good management team there, a lot of good coaches. Strength and conditioning guys who are very good and I think it is very important for Offaly to hold onto them if they want to progress.”

He was proud of the way Offaly play and he felt they had to chances to win it but he wasn't in the market for moral victories.

“We are disappointed that we didn't win the game. We had enough chances to have won it, we created the better goal scoring opportunities and didn't convert. I felt that if we converted one of those, it would have maybe propelled us to victory but we were right in the game to the very end.

“Kildare kicked a couple of outrageous points in the last couple of minutes to stretch their lead out. We had it back to a single point after their lead had drifted out to four. I am very very proud of the performance. They were manly, an awful lot better than we were last weekend (in a league defeat by Derry). Last weekend was a difficult encounter and certainly we rattled Kildare.

“We didn't come here for a morale boosting defeat. We came here to win the game and that is genuine. I thought there was a great edge to the players before the game, they were very confident. It is just disappoointing. If we are going to improve the lot of Offaly football, we have got to win, to take a big scalp like Kildare or Meath last year and unfortunately we haven't done that.”

He spoke about the need of introducing subs late on.

“We needed fresh legs. It comes down to the depth in the squad and we needed fresh legs to energise it. A lot of guys had left a lot out on the pitch at that stage and we had missed chances. I felt had we levelled it and that was the plan, Kildare might have buckled a little bit if the game had gone to parity with a couple of minutes to go. We might have got a chance to kick the winner but it didn't happen and they kicked a couple of points that made the difference.”

Cian Farrell and Bernard Allen had good goal chances, one in each half, and asked about the importance of this, Maughan remarked:

“They have a lot of high profile players, a lot of talent that we have read about. The bookies had them very hot favourites but shocks can happen. I hear Cork have beaten Kerry in the Munster championship and Laois hurlers nearly beat Clare. Limerick nearly edged out Tipperary (Munster football). It is a very unusual championship in that regard. It wouldn't necessarily have been a huge shock to us but it might have been a surprise to a lot of people if Offaly had beaten them but Offaly never fear Kildare. That goes back as long as I am watching football. They kind of lift themselves for them.

He was very happy with the performance of Cian Farrell and took plenty of positives from the game.

“There are lot of positives. Rory Egan, a young guy just coming into the panel a couple of months ago after Covid. We have a couple of other young lads that will definitely play for Offaly. They are talented enough and good enough. They will get their opportunities.”

He answered very honestly when asked if Offaly have improved during his two years in charge.

“The reality is we haven't moved that far, we are still in Division 3. We still haven't taken a big scalp. If we had managed a victory over Meath last year or Kildare today, it would have propelled the thing and given a bit of confidence. There is nothing wrong with Offaly football. It can be unattractive playing in heavy conditions and Winter football and playing against teams who park the bus with fifteen behind the ball. We are not good with that. That is the way football is gone. It is not easy on the eye and it is unattractive.

“This evening we had a very good open game of football. It was end to end and I think if there were spectators here, they would have enjoyed it.”

He talked about the importance of getting out of Division 3.

“When you play in conditions like we did this evening, it makes a difference. Often we are playing Division 3 football in bad conditions and dare I say it, I might get into trouble for saying it, refereeing standards mightn't be as high. We were lucky enough that we had a referee who understood the game tonight and let it flow. There was no nonsense from that perspective but we have seen some awful decisions. I saw one on Friday night with the Tipperary ladies denied an equalising point, which was a terrible decision. I am not here to knock referees but there are a combination of factors that just mitigate against a young fresh team like Offaly playing to their best in Winter league football and that is difficult. Look, we will see what the future holds.”

That defeat ends the season for Offaly with no back door. “We had back door victories over London and Sligo last year. The back door would have been good but it is what it is.”