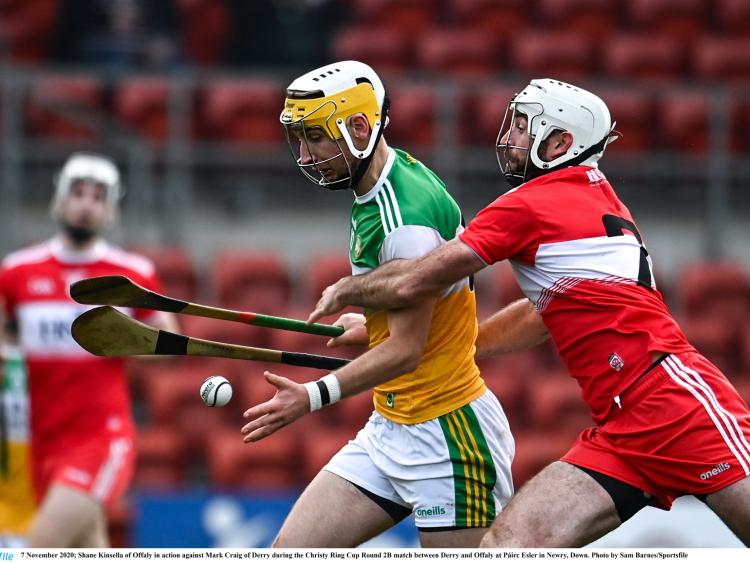 WINNING the Christy Ring Cup may be a big target for Offaly senior hurlers but next Saturday's semi-final against Down in Newry is far more important than any final, in terms of the mid to long term future of the game in the county.

With the two finalists guaranteed promotion to the Joe McDonagh Cup, this semi-final is the biggest game of the year for Michael Fennelly's charges.

Returing to hurling's second tier in the Joe McDonagh Cup is the main objective for Offaly this year and that will be achieved if they can successfully get past the challenge of Down on Saturday.

Forced to concede a walkover to Kildare in their first game after a player tested positive for Covid-19 and all other players were deemed as close contacts, Offaly got their first piece of action in Newry last Saturday with a facile 0-32 to 1-12 win over Derry.

While that walkover did not prove fatal as first round losers had a second chance, it has still had an adverse impact for Offaly. First round winners have home games in the semi-final and that is why Offaly must travel to Down for this game – had they beaten Kildare in the first game, they would have had a week's break and then a home venue for the semi-final.

It could, however, have been worse for Offaly. Down played some of their home hurling league games this year in Rubane, near Newtownards, way north of Newry and out near the coast – a three and a half hour journey from Tullamore according to Google maps compared to a 2 hour 10 minute one for Newry. They also played in Castlewellan, a 2 hour 37 minutes trip and have played in other venues in north Down in recent years, as well as Newry.

Fortunately, limits on the distances teams are allowed to travel (130 miles) under Covid-19 regulations has resulted in Newry being named as the venue and having travelled there last Saturday, that trip won't bother Offaly too much.

It is not ideal and it does increase Offaly's challenge but it shouldn't really matter when it comes down to the match. Almost every Offaly player and management member travelled to Newry last Saturday by car on their own as a result of an Offaly County Board decision to further minimise any chance of spreading Covid-19 – the roads were very quiet for a Saturday and the journey was a far less arduous one than would normally be the case.

While Saturday's performance was not perfect, it was still a good one and suggests that Offaly should be well able to win this competition. Offaly were excellent in the first quarter and then finished strongly after Derry came back at them a bit early in the second half – a red card for corner back John Mullan in the 44th minute broke the spirit of the Derry men.

Offaly played some very good hurling, with the emphasis on retaining possession and finding their man. Not everything worked and there were mistakes made but Offaly are starting out on the road to recovery and it will take time.

They will be wary of the Down challenge but it will be a big shock if Offaly lose here. Down competed in Division 2B of the National Hurling League, a step below Offaly, and the Derry game suggests that there is a big difference in standard between the two.

Down did well to win the division and get promotion to Division 2A, where they will compete against Offaly next season. They beat Derry by 2-16 to 0-17 in the final a few weeks ago but had lost 1-19 to 0-19 to Derry last January.

Considering the huge gap between Offaly and Derry last Saturday, both on the scoreboard and in quality and play, it suggests that Offaly should be able to win fairly comfortably. Of course, they can't afford to think that way and no doubt, Michael Fennelly and co will have them very focussed and highly motivated.

Two teams are being promoted this year with no relegation as authorities bring the Joe McDonagh Cup up to six teams next season. That certainly helps Offaly and a win on Saturday will remove the real pressure from the season – even if failure to win the Christy Ring Cup would be bitterly disappointing.

The Offaly team won't be announced until near the weekend but there is unlikely to be any chances from the one that started against Derry. Offaly played well enough, collectively and individually to justify going with the same team. Down will have watched Offaly closely last Saturday and will be aware of their strengths.

They will be especially conscious of the need to avoid fouling with Eoghan Cahill so accurate from frees and they will be trying to quickly close down Offaly players. Down will work very hard but it still shouldn't be enough for an upset win.