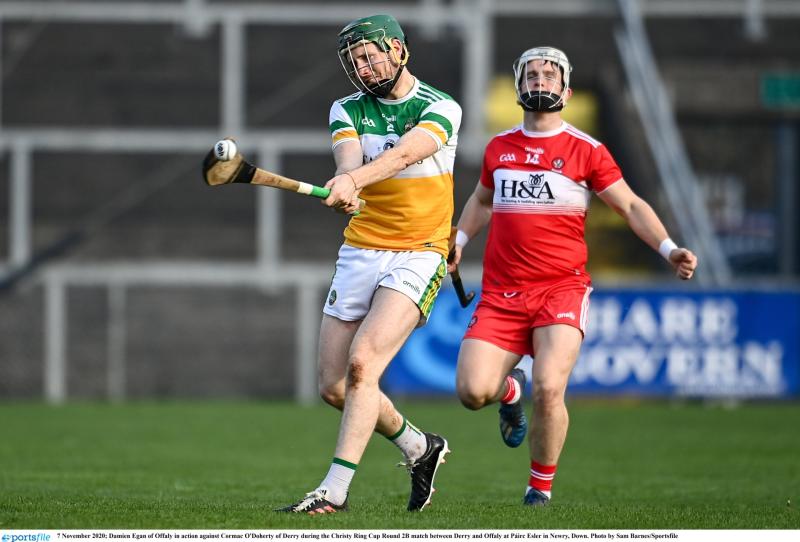 Damien Egan clears his line for Offaly against Derry.

ONLY finding top gear in fits and starts, Offaly senior hurlers still showed promising enough form to suggest that they should be good enough to win the Christy Ring Cup when they cruised by the challenge of Derry in Newry.

Excellent in the first quarter, Offaly weren't as good after that but they still had more than enough in the tank to brush past a game but very limited Derry side.

Having conceded a walkover to Kildare in the first round after a Covid-19 case involving a player resulted in the panel being deemed as close contacts, Offaly have no room for error left in this competition and this game was all about winning but the performance and manner of victory was also important.

Desperate to return to hurling's second tier in the Joe McDonagh Cup, Offaly's display was far from perfect but it was good enough to back up the belief that they are a step ahead of everyone else in this competitiion. They were very good at times here and this win and a 32 point haul has to be good for their confidence.

They played their best hurling in the opening quarter, bringing a real intensity and physicality to proceedings and clearly anxious to show Derry that there was no prospect of a shock result. With Eoghan Cahill outstanding early on and Cillian Kiely and Ben Conneely controlling the heart of the defence, Offaly soon established a firm grip and led by 0-8 to 0-3 at the first water break – their stick work was generally very good in this period and they were sharp and clinical in most parts of their play.

Even though they doubled their lead after the second water break, Offaly were not quite as good coming up to half time. They weren't as clinical as errors began to creep into their game and they weren't as accurate with their short passing. Offaly were still good value for their 0-16 to 00-6 interval lead but were thanful that Cormac O'Doherty missed a few scoreable frees for Derry – he missed three including one particularly bad miss while he also went for goal from a 21 metre free just before the break and had he converted all these, it could have made a big difference.

Offaly continued to struggle to find their A game early in the second half as Derry threw the kitchen sink at them – they outscored Offaly by 1-3 to 0-3 early on with the goal coming from Richie Mullan in the 41st minute after poor defending as they cut the gap to 0-19 to 1-9. It wasn't close enough to cause true concern for Offaly but there was still enough for manager Michael Fennelly to furrow his brows and they needed to steady things.

A red card, however, for Derry corner back John Mullan after he chopped down on an Offaly defender in the 44th minute really knocked the stuffing out of the northerners. Eoghan Cahill pointed the resultant free and Offaly eased home from here.

As Derry resorted to lobbing in high balls on top of their full forward line, Offaly kept Cillian Kiely back as the extra man and he mopped up a lot of ball. Derry seemed to throw in the towel as it wore on and Offaly got twelve points in the closing twenty five minutes with Derry only managing three in reply.

Overall, it was a decent display by Offaly. You could pick holes in aspects of it but they are a work in progress and patience is needed. They played a passing, possession orientated game here, with the emphasis on finding their man rather than hitting hopeful ball. Not everything came off – there were some misplaced passes and a couple of Stephen Corcoran's short puck outs didn't find their intended target but these are things that can be improved.

Offaly also didn't score a goal but they didn't need to go for them. They did have one great chance thirteen minutes into the second half when David Nally raced into open space in front of the goal – the Belmont man, who worked so hard, could do with being a bit more clinical in those positions and his shot was saved by Sean Kelly, deflected out for a '65' that Cahill at least pointed.

Cahill had a great day at the office. He was brilliant early on as he sprayed quality ball around as well as scoring frequently. He top scored with seventeen points, four from play and it was an almost flawless display of shooting.

There were plenty of other excellent performances. Cillian Kiely was immense at the heart of the defence, winning all types of ball and trying to use it well – he had a couple of wayward passes but he showed his importance to Offaly.

Ben Conneely and David King also had excellent games in a very good defence that never really put a foot wrong. Cahill and Nally took the midfield honours and the attack were lively, honest and sharp. Again, not everything came off for them but they were at least trying to do the right thing with Peter Geraghty and Liam Langton very good. Oisin Kelly won some great ball and was close to getting in on goals a couple of times while Offaly also introduced subs that made a difference with Sean Cleary, Thomas Geraghty and Brian Duignan all scoring off the bench.

There is still a long road ahead for Offaly. As Michael Fennelly remarked afterwards, there is plenty of room for improvement and things to work on but it's a start, they are trying to play to a plan and raise the bar in all aspects of their game. A draw will determine who Offaly's semi-final opponents are and they won't be counting any chickens, but Offaly do look too good for this level.

* Full report and interview with Michael Fennelly in Tullamore and Midland Tribune on Wednesday.