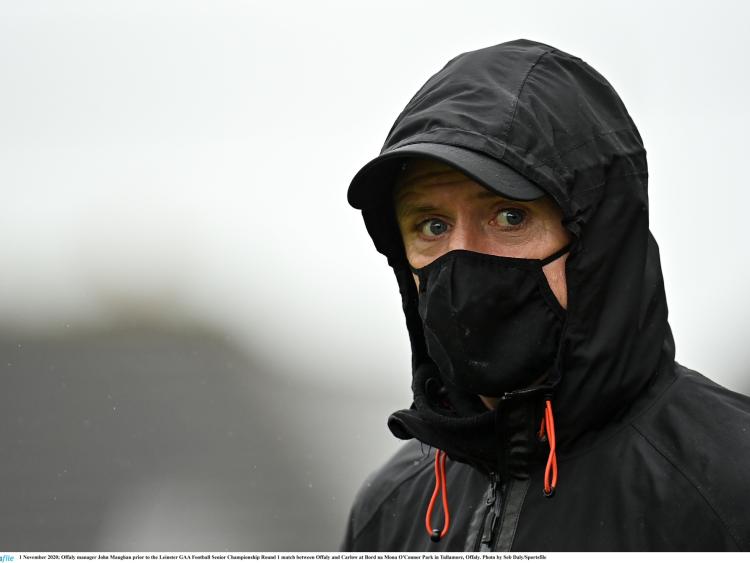 OFFALY manager John Maughan is under no illusions about the improvement that is needed if they are to shock Kildare in Sunday's Leinster Senior Football Championship quarter-final in Portlaoise.

Speaking after Sunday's 3-14 to 0-20 win over Carlow, Maughan did not try and hide his disappointment at some of the football played and mistakes made during a win that was more hard earned than it should have been – Offaly were eight points up well into the second half and ended up holding on for the win.

When it was suggested that he was relieved at the final whistle, he smiled:

“That is the term that is being used around here for the last twenty minutes or so, mightily relieved. I won't say in the second half that I thought we were going to win by a lot but we were comfortable. We just butchered too many chances. The basic fundamentals of hand passing when we had overlaps, that was an issue and it is an aspect of our game that we have to tidy up on.”

The Mayo man went on:

“It is all about winning championship games. We are disappointed with the way we played but the bottom line is we won the game and we have to be satisfied with the fact that we won the game and get an opportunity to go out and express ourselves and to be much better next Sunday. We are lucky we have the game coming up so quickly because I know the boys are not happy with the way we played. We have aspects of our game to work on. We have to tidy up our kickouts, hand passing when we have over laps. We have got to do that slicker.”

He agreed that Offaly could very easily have scored six goals.

“We should have had and there is no question about that. We created the chances and we have to take the positives out of it. We were creating great chances. We scored 3-14 and we could have got another three or four goals.”

Midfielder Jordan Hayes went off with a dislocated toe, sustained while scoring an excellent first half goal and the manager confessed:

“I have no idea how long he will be. He is a tough guy and the first thing he said to me after is he will be fit to play next Sunday. You would expect that type of reaction from him. We will have to monitor him and see how he goes. Shane Horan is the same. In one way, it is a good thing when you have the games so fast but when you have injuries, it is not so good.”

He did not use the conditions as an excuse for the way Offaly played.

Maughan spoke about the positives.

“The positives, we scored 3-14, we created an awful lot of chances and we won the game”.

Asked about Colm Doyle being taken off after playing well, he revealed:

“He did go well, he picked up a yellow card early. I thought the referee was harsh on him on a couple of occasions but notwithstanding, we got word at the second water break that he was on a tick and very close to a second yellow so we had no option but to throw in Joey O'Connor at that stage.”

He admitted that he was disappointed with the way Offaly let Carlow back into the game late on.

“No question about it. I thought we would have driven on. There was nothing wrong with our fitness. We just butchered too many chances and that was the problem.”