Offaly raise as many questions as answers in narrow win

Kildare next up for relieved Offaly 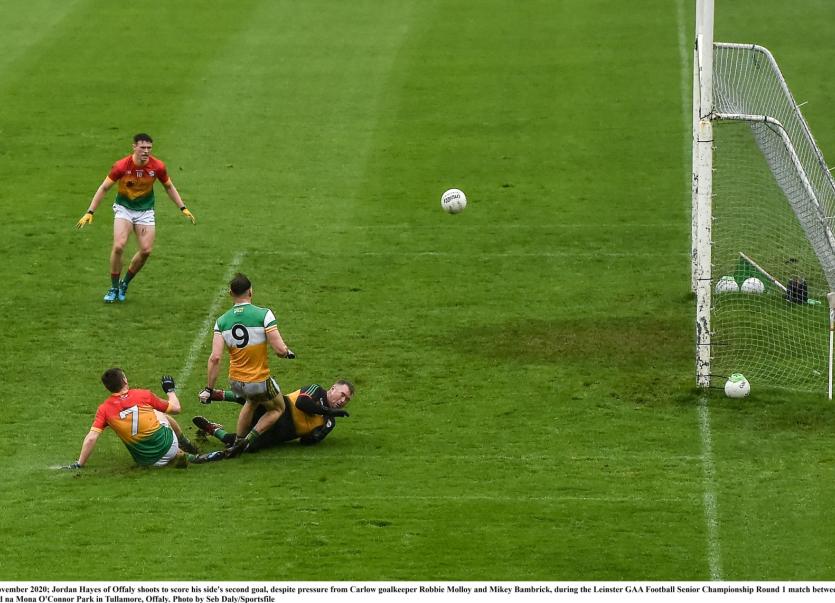 Jordan Hayes scores an excellent first half goal for Offaly but unfortunately dislocated a toe while doing so.

DEEPLY relieved to have secured a quarter-final place against Kildare next weekend, Offaly raised as many questions and answers when surviving a stern examination from a very motivated Carlow side in Bord na Mona O'Connor Park.

Ahead by 3-13 to 0-14 with thirteen minutes left, Offaly were in complete control with no trouble looming on the horizon but they ended up hanging on for dear life before the final whistle brought sweet relief to them.

Offaly just about deserved to win but had the result went against them, they wouldn't have had a hard luck story to cling to and it very nearly unravelled for them in the closing quarter. Carlow got six points on the trot to bring the gap back to two with two minutes plus of injury time to play and Offaly were in serious jeopardy.

They had played for ten of those minutes with fourteen men after impressive sub Cian Farrell got a 58th minute black card and he came back on the field to kick the closing point four minutes into time added on – Farrell had earlier kicked three points, one '45' and two frees and his contribution was crucial on a day when Offaly blew hot and cold, with the emphasis more in the luke warm to cold territory.

Carlow full forward Chris Blake had blasted a 54th minute penalty over the bar and the losers will reflect on what might have been but Offaly could very easily have scored a half dozen of goals themselves. Niall McNamee was wide with a great chance on the stroke of half time, the inform Bernard Allen fired another one over the bar and a sloppy final ball prevented Offaly getting in for a couple of others.

As it was two first half goals from Niall McNamee and Jordan Hayes and a second half one from Bernard Allen separated the sides but it was one very close run thing. Indeed, Carlow scored 20 times compared to 17 for Offaly and in some ways that was an accurate reflection of the way this one went, though Offaly did look capable of getting in on goals all afternoon.

Offaly's first goal from Niall McNamee came in the second minute when he punched Bernard Allen's excellent centre to the net to give them a 1-0 to 0-1 lead but they didn't really build on that. Instead the Offaly defence found themselves regularly extended with Carlow centre forward Ross Dunphy and full forward Chris Blake posing serious problems for them. Offaly centre half back, John Moloney and full back, Eoin Rigney were too loose in that opening quarter with Blake getting Carlow's first two points and Blake galloping through the heart of the defence. In fairness, Rigney tightened up a lot after that and Moloney also improved as the game wore on, creating his own challenges for Carlow with frequent bursts into danger territory.

Carlow fully deserved to be level, 0-5 to 1-2, after seventeen minutes but Offaly's second goal arrived a minute later. The build up involved Shane Horan, Bernard Allen and Niall McNamee and Jordan Hayes came in from the right, angling a powerful left footed shot to the roof of the net – unfortunately the Edenderry man dislocated a toe while shooting and that ended his afternoon as he was replaced by Conor McNamee.

Injury also ended Shane Horan's afternoon three minutes later with Cathal Mangan entering the fray. Carlow responded well to Hayes' goal, scoring four of the next five points to level it up at 0-9 to 2-3 but Offaly finished the half well. Anton Sullivan, Bernard Allen and Niall McNamee (free) put them three up and Offaly should have killed the game off – John Moloney gave a wayward pass to Niall McNamee after carving the Carlow defence open and then McNamee was wide with that goal chance just before the interval. Offaly led by 2-6 to 0-9 at the break and a third goal would probably have broken Carlow's spirit.

Offaly played their best football after the resumption. While Carlow were holding their own (Jordan Morrissey was wide with a clear 38th minute goal chance), Offaly kept the scoreboard ticking over and still led by three points, 2-9 to 0-12 when their third goal arrived in the 50th minute. Colm Doyle raided up field from wing back, getting in on goal and his shot was blocked. He did very well to win the break, passed to Bernard Allen and the Tubber man duly dispatched from the edge of the square.

Carlow got the next two, including that Blake penalty – awarded after Sean Gannon was fouled by Eoin Rigney following a quick free – but Offaly lifted the siege. Three on the trot from Farrell (free), Peter Cunningham and Cathal Mangan, who worked very hard when introduced, gave them an eight point lead and they really should have coasted home from here.

It all leaves Offaly needing major improvement if they are to trouble Kildare and their form has been stuttering since action resumed. They had league defeats by Tipperary and Derry and while this was a win, and that is the bottom line, there was enough here to raise real doubts about their prospects of an upset next weekend.

There are positives to be taken and Offaly's work rate and honesty is close to where it should be. However, you can also pick plenty of holes in the way they are playing and elements of their work rate. They did well to win to turnover a good bit of Carlow ball but their error count was higher than any manager would wish while their movement off the ball was substandard at times. This was especially noticeable in the first half when the man in possession often found himself with few options. There were a few times when Offaly were moving out of defence but were forced to turn back as there was no one running off the shoulder or not much movement up field.

Overall, it was not a good performance and Offaly played well in fits and bursts rather than for concerted spells. There were some fine individual performancs with Niall Darby very tidy on the full back line and Colm Doyle doing really well ahead of him – the Clara man defended well, he was composed on the ball, he was pivotal in the third goal and he was only taken off in the 53rd minute as he was in yellow card trouble and was showing signs of tiring. Paddy Dunican had a mixed bag – the Offaly goalkeeper made a couple of fine second half saves but was hit and miss with his kickouts in the first half, especially a couple of misplaced ones that went out over the sideline.

Anton Sullivan and Bernard Allen were the best players in an attack where Niall McNamee had excellent moments, Ruari McNamee showed his quality on the ball and Peter Cunningham was very influential when moved out to midfield late on, winning plenty of ball and driving at the opposition.

* See Tullamore and Midland Tribune on Wednesday for full report and a preview of the Kildare game next weekend.