Johnson and Dempsey out as selectors face big calls 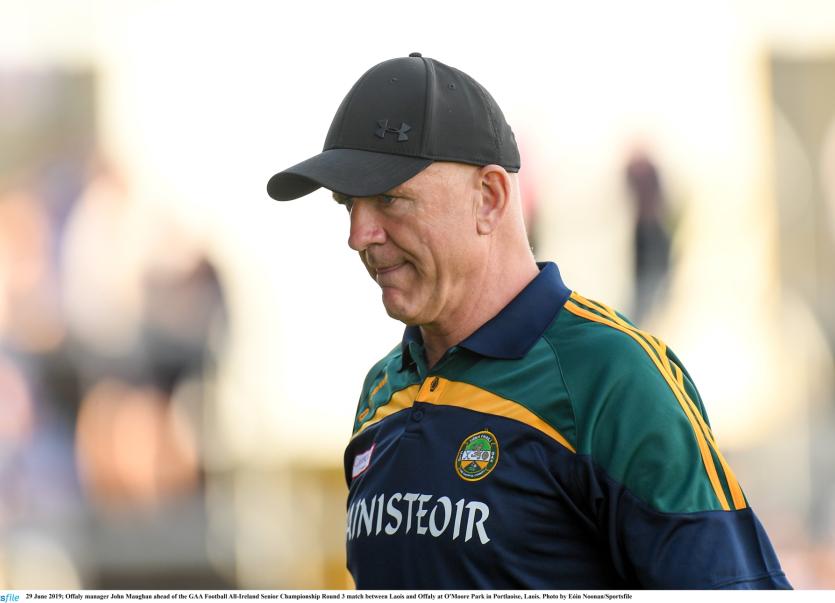 OFFALY will enter the Leinster Senior Football Championship on Sunday next with significant questions hanging over them about their current form.

They will be favourites to get the better of Carlow in Bord na Mona O'Connor Park but there form has been inconsistent since county activity resumed a couple of weeks ago and this is a real banana skin for them.

While relieved to retain their Division 3 status in the National Football League, Offaly's form has not been convincing at all in their defeats by Tipperary and Derry on the last two Sunday's.

While they were not far away in either game, Offaly didn't play well and there are plenty of doubts about their form. They have been trying hard and working dilligently but Offaly have just not been sharp in their two games, making too many errors and being turned over too often.

It leaves manager John Maughan and selectors with big selection calls to make this week and most interest will focus on whether they start Rhode duo Anton Sullivan and Niall McNamee. Offaly were heading for a heavy defeat against Derry last Sunday but were a different team with them on the field in the second half. An eight point deficit was brought back to two and while a victory always looked beyond Offaly's grasp, they provided a much greater attacking menance with them on.

Sullivan got two points and was close to his best while Niall McNamee's kicking was fantastic as he got five points, four of them from frees.

Sullivan's omission from the starting line-up for the last two games was surprising as he has been a regular for several years but there may have been logic behind it. Whatever the thinking was, Sullivan went really well when he came on, taking on his man, giving quick deliveries, scoring those two points and resisting the urge to go to ground like he some times does.

It will be a big surprise if Offaly don't start Sullivan and there will also be a serious temptation to start McNamee. It probably should happen but is not as clearcut as there is also merit in having the now veteran McNamee on stand by as a momentum substitute.

However, the attack badly needs to find some form and management will be acutely aware of that. Offaly's starting six forwards only got one point from a free last Sunday and they also struggled against Tipperary, albeit to a lesser degree – when they at least got sixteen points, compared to 1-10 last Sunday.

Their honesty and work rate is beyond question but Offaly have struggled to create chances and both Sullivan and McNamee bring plenty of creativity and energy to the table.

The game comes too soon for Ferbane protege Cian Johnson, who is receiving treatment for groin and ankle injuries. John Maughan confirmed after Sunday's game that Johnson won't play this week or the following week, if Offaly win, while he is unlikely to see action again in 2020.

Defender, David Dempsey is also out. The Ballycommon man was hospitalised recently with an appendix problem and he is a loss from the full back line. Tullamore's Michael Brazil, however, may come back into the equation. A strong running, powerful player, he didn't feature in the last two games as he was unavailable for the first two weeks of training but he is now back on board and ready to go.

Management will have a particularly close look at their half forward line where Shane Horan, Ruari McNamee and Cathal Mangan have played the last two games. Horan and Mangan are very hard workers and come out to support the midfield zone but they are not the most prolific of scorers. There is scope for this type of player in modern football but Mangan in particular is not a natural forward and may have more to offer further out the field.

Ruari McNamee has lovely silky skills and is well capable of creating and taking chances when on his game – moving Peter Cunningham out to the half forward line is another very viable option. Cian Farrell and Bernard Allen have been the two corner forwards – Allen is likely to start and is a proven performer. It hasn't really happened for Farrell in the last two games but Offaly really need to blood new players at this level and the Edenderry man remains a very exciting prospect.

Aaron Leavy and Jordan Hayes have worked well at midfield and are developing a good combination while Cathal Mangan and Eoin Carroll are very good options for here – Carroll has played wing back since play resumed and is growing into this role.

Joe O'Connor has returned to the panel and he had a very good first half against Derry. He is very good on the ball and can create a lot of openings when moving forward.

Management will more than likely go with the defence that started against Derry with Paddy Dunican in goals and a back six of Declan Hogan, Eoin Rigney, Niall Darby, Eoin Carroll, John Moloney and Joe O'Connor.

Management drafted in a number of new players after the conclusion of the club championships – Jack Bryant (Shamrocks), Cathal Donoghue (Kilcormac/Killoughey), Bill Carroll (Cappincur), Rory Egan (Edenderry) and Eoin Dunne (Edenderry). Egan came on as a half time sub last Sunday while Donoghue and Carroll were subs. The others were named on the panel but no one will be disappointed if some of these young players are thrown into championship fray.

Derry were fierce defensive last Sunday, pulling most of their players down the field when Offaly had the ball and Carlow may set up similarly this weekend. As John Maughan said afterwards, the challenge for Offaly is to learn how to break down these teams and cope with negatitive football.

Derry were excellent when they did break forward and while Carlow are unlikely to pose the same threat, they still represent difficult opposition for Offaly.

Carlow will be without two of their key players, midfielders Brendan Murphy and Sean Murphy – Brendan Murphy didn't commit when training resumed while Sean Murphy is injured and he is a huge loss as he has caused Offaly a lot of problems in the past.

Carlow also had a mediocre league campaign, finishing mid table in Division 4 and it will be a big blow if Offaly lose to them on Sunday.

It is not far, however, from being a 50/50 game and Offaly will certainly have to produce a more cohesive performance with less errors than the Tipperary and Leitrim matches to win it. They should be able to get the job done but this is a very tricky tie for Offaly.