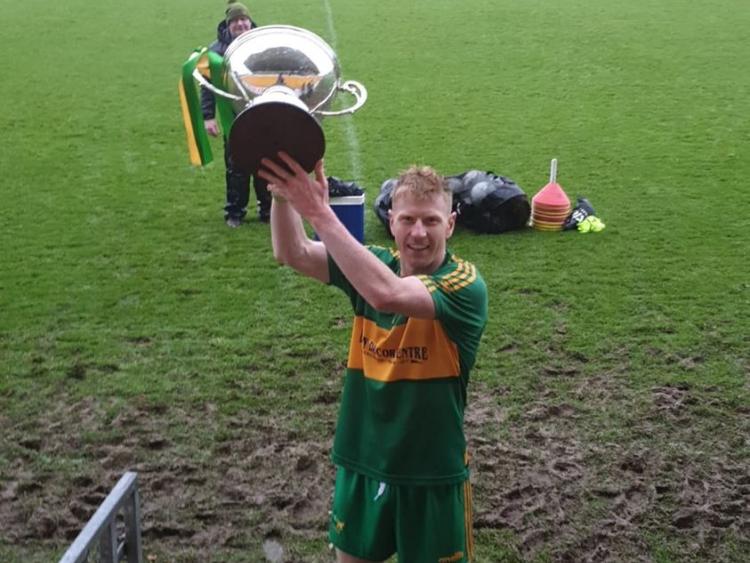 The fact that it boils down to those two very stark choices says it all really. Rhode were 1-9 to 0-6 up with the game in injury time and that really told an accurate story of the way this one went.

Trailing by two points, 0-5 to 0-3 having played against a very strong wind in the first half, Rhode completely dominated the second half – Tullamore didn't manage their sixth point until the 55th minute and when that was quickly cancelled out by Aaron Kellaghan, who had such a productive afternoon for Rhode without finishing off a few chances the way he would have liked, Rhode must have been considering their homecoming celebrations.

It wasn't that they had took their eye off the ball as such, though their management had clearly been concerned at a certain complacency creeping in, hauling off two of their marquee players, Ruari McNamee and Anton Sullivan as injury time loomed – McNamee had sprayed good ball around in the second half and Sullivan, who worked so hard and took plenty of bone shattering hits, was pulled off after carrying the ball into opposing bodies and being overturned, But whatever happened, it almost went horribly wrong as Marius Stones, who refereed a difficult game very well, mysteriously allowed three minutes over the announced five minutes of injury time.

Peter Fox got a point that seemed to be only of academic interest and there were 65 minutes on the clock when Aaron Leavy got a goal after a Johnny Moloney pass.

Most people expected the final whistle to sound from the resultant kickout but play was waved on and it was in the 66th minute when Michael Brazil lofted the ball in towards the Rhode goal. Pandemonium ensued as a spare, impossible to identify from distance, Tullamore boot got the ball into the net after it broke free. As Tullamore's few supporters celebrated wildly in the stands, Stones signalled a free out, ruling that Niall McNamee, back on the edge of his own square, had been fouled after gathering the ball into hand.

That was that and Rhode were able to hold on for a richly deserved win but it was so close to slipping from their grasp. How did that happen? They possibly did become a small bit lethargic or tired (probably a combination of both) when it looked like the job was done while credit has to be given to Tullamore for keeping going when no one could blame them for dropping heads and throwing in the towel. A win for Tullamore would have been larceny on the grandest of scales but that is also football and those things can and do happen.

As a result it was a highly relieved Rhode team that trudged off the absolutely sodden O'Connor Park pitch and it took a few minutes for the enormity of their achievement to kick in – it was their 30th title and over the course of a rather truncated season, the best side in Offaly has very much emerged on top of the tree.

The conditions were atrocious here with constant rain and a strong wind blowing down towards the Park Avenue end. Tullamore had first use of it but didn't make it count. They led by 0-5 to 0-3 at half time but that was a poor reward for a wind that strong and they were definite underdogs in the second half.

While it wasn't a great county final, it was as good as you could possibly hope for in such adverse conditions. There was complete honesty and the standard was decent – players hopping the ball or taking too much out of it paid the price and there were plenty of errors but it was still an engrossing, entertaining, fiercely contested final.

Tullamore led by 0-2 to 0-0 arfter nine minutes but Rhode were level three minutes later thanks to points from Anton Sullivan and Dylan Kavanagh. For the next ten minutes, Tullamore did a lot of damage to themselves. They had plenty of the ball but they didn't use it well and kicked some long ball pointlessly out over the end line. A lovely Niall McNamee point edged Rhode ahead in the 21st minute and Tullamore did improve after this.

Johnny Moloney got a free and midfielders Aaron Leavy and Ciaran Egan got fine points from play to give them that interval lead and at least a fighting chance.

Rhode missed early second half chances with Eoin Rigney and Anton Sullivan dropping shots short and Sullivan having a wide before they began to find the range. Niall McNamee got an excellent point, Ruari McNamee got his sole score and then McNamee pointed a mark to give Rhode the lead in the 43rd minute.

Tullamore were finding it harder and harder to break out with the ball and Rhode controlled all sectors. The game became fractious for a period as Alan McNamee and Paul McConway picked up yellow cards following one dust up while there was another one moments later before order was restored and sanity prevailed.

Rhode went for the jugular – after a poor wide from Anton Sullivan, McNamee got another point and then Aaron Kellaghan got their crucial goal in the 49th minute. Ciaran Burns lost the ball while coming out of defence after an excellent Alan McNamee delivery in and when the ball found its way into the path of Kellaghan, he blasted to the net from close range. Niall McNamee got his fifth point to make it 1-8 to 0-5 and there appeared little danger when Moloney got Tullamore's first half from a free but it was the precursor to the most dramatic of finishes.

While several players made important contributions, Rhode won primarily because of the brilliance of the McNamee brothers, Alan and Niall.While Niall's five point haul and the havoc he caused every time the ball went in won him the man of the match award, it really was 50/50 between him and his older brother.

It was an incredible performance by Alan – now 38 years of age and winning a remarkable 12th senior football medal, he hadn't started earlier games as Rhode managed his game load because of injuries but their management took the big decision last week that he was starting. It yielded the richest of dividends as McNamee controlled the midfield sector, winning all types of ball and the quality of his deliveries forward just took the breath away at times. Most importantly, he lasted the distance and it was the 61st minute before Rhode decided to throw in fresh legs.

It was also a special display by Niall. A hugely emotional day for him after a bad head injury, sustained against a reckless Clara in the sem-final, meant that he wasn't a factor in last year's final defeat by Ferbane – it meant that the question was asked all year about what the result would have been if he was fully fit. It's a pointless question and anyway, it shouldn't take away from the fact that the Ferbane team deserved a county title after years of hard luck stories but McNamee showed his importance to the Rhode team here. His skill and composure on the ball, his finishing and his ability to bring others into the game was quite awesome.

There were other big performances from Rhode players. Captain Niall Darby will have been disappointed with some of the frees he missed but he played really well in their defence, defending well and using the ball efficiently. The Kavanagh's, Jake and Dylan will also reflect proudly on their afternoon with Jake manning the edge of the square very well and Dylan giving good assistance to Alan and Conor McNamee as well as getting an important point.

Special mention also has to be made of Aaron Kellaghan – he showed for the ball so well, got on a huge volume of it and was very close to having a really excellent game. He scored a goal and a point and had his finishing been a bit more clinical, he could have bothered the McNamee's for the man of the match award. Still, it was a big performance from a young man on a very difficult day for football.

Anton Sullivan was also very important – he mixed the good with the bad but can do that in a games and his influence on this Rhode team can't be understated as he once again caused serious headaches for the opposition.

It was a brave performance by Tullamore but they were second best on the day. In truth, this was more like a six or seven point game than a two point one and they did well to be so close. It didn't quite happen for them despite a performance that was honest and hard working. Their full back line of Ciaran Burns, Paul McConway and Patrick Robilliard did a lot of good things but a huge volume of ball went in on them and Sullivan, McNamee and Kellaghan ultimately did their job as they scored 1-6 between them.

The losers had no player reaching the level of Alan and Niall McNamee – Johnny Moloney was mainly responsible for bringing them back into it when he went out midfield but his overall influence was not as profound as Tullamore needed. Alan McNamee lorded the midfield battle but Aaron Leavy had very good spells for Tullamore, scoring two points and Ciaran Egan kept trying.

Nigel Bracken had started very brightly but he was one of the Tullamore players who kicked some wayward ball and as a unit, Tullamore didn't produce the consistency they needed. It was also a bridge too far for some of their new kids on the block with Luke Egan taken off at half time and others struggling to varying degrees – they will, however, learn a lot from this, it was a huge achievement to reach the county final after losing their first two group games and Tullamore should be very genuine contenders next year.

See Midland and Tullamore Tribune on Wednesday for full report and coverage, including after match interviews with Alan McNamee, Niall Darby and Malachy McNulty.