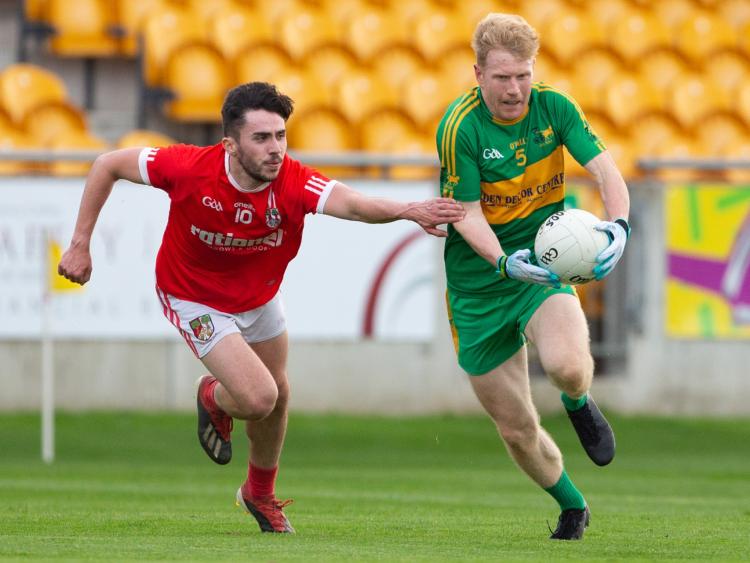 Niall Darby driving on for Rhode.

EVEN now Niall Darby still gets sharp pangs of pain and regret when he reflects on Rhode's defeat by Ferbane in last year's Senior Football Championship final.

It transcended a normal defeat. Every county final defeat is a bitter pill to swallow but Rhode were also bidding to be the first side from the clubn to win four senior football titles in a row. And then you had the circumstances surrounding it as Niall McNamee and Brian Darby picked up nasty head injuries in a now notorious semi-final win over Clara.

McNamee in particular was clearly not right in the final, going off early and the question continues to be asked about what would have happened if he was fully fit.

Niall Darby was the captain last year and the hurt has lingered for him, despite his attempts to put it to bed.

“That hurt a lot, that took a lot to get over. The circumstances of it are what got to me the most. It was a very tough one to take but that is sport and that is the way it goes.”

He agreed that the semi-final against Clara wasn't nice and that some of their players didn't play football for some of the game. “No, they didn't. I think we lost by four in the end and Niall only played a few minutes. I am not sure how right Brian was in that game. Kenneth Garry didn't play in goals, Paul McPadden was out and even at that, we could have won it. We were 11-6 up at half time and two quick goals from Cian Johnson took the wind out of our sails and they managed to push on. That one will live with me for a long time but I have to put it to the back of my mind now.”

When it was suggested that Niall McNamee would have been worth 1-2, 1-3 to Rhode when they were going well in the first half against Ferbane, he said: “He probably would have been. Not that he has so many of them but on a bad day Niall could be worth six or seven points to us. But that is all hearsay as well, we don't know. It is all hypothetical. The whole history with the four in a row tilt was brought into it as well, that was hard to take.”

He has been delighted to see Niall McNamee bounce back so well this year. “We are lucky we all came around at the same time as Niall. He is a genius. I am very close to him off the field as well, he is one of my closest friends. The week after the semi-final last year, the selfish side of me kicked in and I wanted to know would he be right for the final. I didn't realise how serious it was and he still gets moments where he is busy and has to sit bits out. It is great to have it back, albeit still with a few symptoms of the knock he got last year. As he says himself, he might be still a bit injured from the knock he got but he doesn't show any signs of it on the field.”

A long time Offaly player, Darby spoke about the difficulty for players in this Covid-19 disrupted year. “It has been tough but it has been the same for everyone. We had to go with the guidelines and it didn't look like we would get back but thankfully we have.”

How big of a loss was GAA from your life. “I was absolutely lost without it. There are times when training is hard, when it is spilling rain or you have had a long day and are tired but when you can't do it for a long time, it really eats away at you. It shows how much you give to it and the void that is left when you don't have it in your life.”

As a corporal in the Irish army, Darby was able to train away himself in the Curragh but it was more to retain fitness than getting match sharp. “It was more for peace of mind than anything,” he confessed.

An unexpected benefit of the Covid-19 shutdown has been the reallignment of the GAA club season and the concentration on club affairs when it resumed without county complications. Darby has welcomed that and would like to see it continue in following years.

“The current format leaves club players in limbo for too long. A couple of years ago, we played a championship match in April and there was nothing until later in the year. I know there are league games but there are only so many of them. This condensed format probably suits everyone bar when someone gets a bad injury and they could miss a lot of important games.”

The Rhode captain has adapted to games without crowds, though it has been a shock to the system. “You don't hear the abuse as clearly,” he joked, adding that bringing your own water bottle, keeping to yourself and not togging out in dressing rooms has been stranger.

“In the first game against Clara, the two teams togged out in the tunnel outside the dresssing rooms in O'Connor Park. There was the guts of sixty, seventy lads in on top of each other and it would have made more sense to use the dressing rooms. That type of thing is strange but everyone has to learn to adapt.”

Darby was happy with Rhode's form in the group games but said that teams were finding their feet and you couldn't read much into it. They got a major scare in the semi-final against Edenderry before winning after extra time.
“It wasn't looking great and I missed a free. I looked at the clock and there was 64 minutes gone. I thought we were finished but then as I was running back, the referee said there was two minutes left and I was praying we would get one more chance. They won the next kick out, we won it back and Ruari got a great score. We were thrilled to get out the other side of it.

He agreed that Rhode were off the boil compared to normal. “It is hard to be flying every day but we did look flat. A lot of that was down to Edenderry too. They took it to us from an early stage. We grew into it a bit more but never really hit our stride. Thankfully we got it to extra time.”

Darby reads nothing into their group win over Tullamore and stressed that they have come on a lot since then. “The toughest time to ever play Tullamore is in a final. We had a good win over them in the group in 2013 and they turned around and beat us in the final a couple of months later. It will be a serious game in the final.”

He also knows that Tullamore won't fear them. “And they would be right not to. The longer Tullamore stay in the championship, the harder they are to beat.”

See Tullamore and  Midland Tribune for comprehensive preview and interviews.