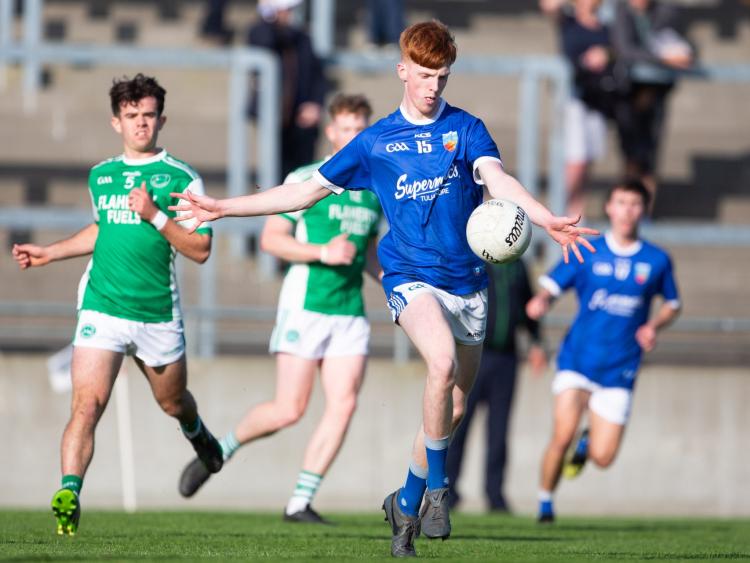 IT could very easily have been a Ferbane and Edenderry decider but the most traditional of all Offaly Senior Football Championship finals has emerged with Rhode and Tullamore clashing in next Sunday's big showdown.

The two dominant forces in Offaly football, Rhode only overtook Tullamore at the top of the roll of honour a few years ago and a fascinating final is in store.

Rhode have been the outstanding team in the championship so far. They waltzed out of their group with easy wins over Clara, Tullamore and Cappincur but they almost came a cropper against Edenderry in the semi-final. Rhode were fortunate to force extra time with almost five minutes of injury time elapsed before Ruari McNamee popped over the equaliser. In extra time, Rhode were clearly the better team and a Niall McNamee goal clinched it but it was a far from convincing performance from them.

Rhode would not have had one ground for complaint if Edenderry had won and it was one of those rare off days when they weren't at their best, not playing with their usual intensity and pace. However, they survived and that is what it is all about. The semi-final raises absolutely tantalising questions but Rhode remain the favourites to win the title.

However, the scene is very much set up for an audacious Tullamore championship win. Their appearance here is quite extraordinary and they really should have been gone in the group stages. They were shocked by Cappincur in the first round and were still off the pace when losing to Rhode in the second round – they would have been gone that night if Cappincur had not let Clara off the ropes and suffered a devastating narrow loss.

Cappincur's defeat meant that Tullamore were still alive in the final round – they needed to beat Clara and they needed Rhode to beat Cappincur. Both results were always very likely and that is the way it emerged. Rhode pulled away eventually to win comfortably over Cappincur while Tullamore were outstanding as they demolished Clara in Tubber – sending Clara into the relegation play off where they were subsequently beaten by Bracknagh.

It was a typical Tullamore houdini act – they have scraped out of tight corners before and gone onto win championships and there are many people out there who expect this to happen again now that they are in the final. Of course, Tullamore's ability to come from nowhere and win championships can be overstated – yes it has happened and it is one of the very positive aspects of Tullamore's psyche that they have no fear of any opposition when it comes down to the business end of the campaign but there has also been plenty of years where they have been well beaten in semi-finals or finals, where they got out of tight corners but didn't go the whole way.

Their ability to come up on the outside and win championships is a definite factor now but it shouldn't be over played either.

In the semi-final, Tullamore did show further evidence of new found health. They required extra time and then Offaly's first penalty shootout before eliminating champions Ferbane but over the 80 minutes plus, Tullamore were the better side and the result was a fair one.

Technically, they may be in the final with only one win on the field of play but they are there on merit and they command the utmost of respect. They may be second favourites but they have a great chance and they will relish the opportunity of taking down Rhode.

Rhode were outstanding in the group phase but their performance against Edenderry does raise some questions. It may have been the stab that they needed and they will hit the ground running against Tullamore or it may be the symptom of something more worrying and the possibility that they are a team in decline. The evidence will emerge in the final but Rhode are deserving favourites.

The Rhode team retains a familioar look. Brian Darby, Niall Darby and Eoin Rigney are the key figures in defence while Niall McNamee and Anton Sullivan are their star forwards. The form of Niall McNamee and Anton Sullivan has been particularly compelling this year. While he floated in and out of the game in the sem-final and was not as influential as the group stages, Niall McNamee still got the crucial scores that drove them across the line and he has been brilliant this year. It has been his best year since the mid to late 2000s and his form has been sensational – it has been particularly refreshing as his career was in doubt after he suffered a nasty head injury in the semi-final win over Clara last year.

That injury meant that he played a very limited part in the final against Ferbane and the question continues to be asked about whether Ferbane would have won if he was fully fit. It is a legitimate question and we can all speculate about the answer and the possibility that a fully fit McNamee would have had Rhode out of sight before Ferbane's stunning second half revival – however, it is really a pointless debate and the reality is that not only did Ferbane win but they deserved to win a championship after persevering for so long despite a sequence of devastating defeats.

However, McNamee has bounced back in spectacular fashion this year and he is the standout figure in this year's final – though his team mate Anton Sullivan and Tullamore's Johnny Moloney will also have powerful impacts on the outcome.

If McNamee hits top form, then it is hard to see Rhode being beaten but if he has an off day or is tightly marked, then Tullamore have a great chance. So far no defender has proven to be truly capable of marking him and it is doubtful if Tullamore possess one but McNamee can have the occasional off day and there have been occasions where his influence has diminished late on in tight battles. The key for Tullamore is to stay alive into the closing quarter and then ask the really serious questions of Rhode – there is no guarantee this will happen and Rhode have blown them out of the water in big games before.

Apart from Niall McNamee, Anton Sullivan has also been in fantastic form for Rhode and his pace, energy, finishing and all round activity has created so much for them. We can expect Sullivan to have a very good final and he is now at his peak whereas McNamee is now in the veteran stages of his long career. Ruari McNamee could also emerge as a match winner in the Rhode attack and he is always capable of scoring and dictating play.

For Tullamore, Johnny Moloney is a huge, big game performer. He was brilliant in the semi-final and is the single biggest reason they have resurrected their season and are in the final – even though you could make a case for playing him centre half back or midfield, Tullamore have continued to play him at full forward and this has yielded rich dividends as his ability to kick off both left and right has led to so many scores.

Paul McConway, Declan Hogan and Michael Brazil also bring great experience to the Tullamore team. McConway returned from injury to start against Ferbane and Tullamore are delighted to have him back on board – they will toy with the idea of earmarking him for McNamee but may end up double teaming the star forward as he is near impossible to contain one on one.

Brazil didn't start against Ferbane because of a virus – thankfully it wasn't Covid and we can expect him to be back firing on all cylinders for the final. His physicality, ability to break tackles and drive on is a huge asset to the Tullamore team and he is one man Rhode will be very aware of.

The Rhode team still looks very familiar – Alan McNamee is now being used as an impact sub but he will still have a big bearing on this game and Aaron Kellaghan is emerging as a forward of quality, although he has been often used as a sub this year.

The Tullamore team is more of a mystery and they have a lot of players playing in their first county final. Their team this year includes newcomers in Michael Feeney, Oisin Keenan-Martin, Ciaran Egan, Luke Plunkett, Ciaran Burns, Peter Fox and Luke Egan – Michael Brazil is certain to start and this means that one of them will lose out, most likely, Plunkett, Burns or Fox but it is still a big step up for a lot of these players.

County finals generally don't scare Tullamore players but many of them are into new territory and you just don't know how they will react. Rhode don't have to worry about that, irrespective of the chance that they just won't play well on the day.

Many of those young Tullamore players have done well. Michael Feeney and Keenan-Martin have settled in well to their defence, Ciaran Egan has been very steady at midfield where Aaron Leavy has emerged into a real leader and driving force and Luke Egan has been a revelation in their attack, showing great movement and scoring prowess – Shane Dooley is still contributing very well off the bench and Tullamore certainly have a very good chance.

How the respective defences cope with Niall McNamee/Anton Sullivan and Johnny Moloney.

You would be stretching things to describe this as a 50/50 game but Tullamore's victory prospects are certainly in the region of 45% and a win for them would not surprise many. The impression remains that they could win a famous come from nowhere championship and they will perform close to their potential on Sunday – it remains to be seen if that is good enough.

There are more doubts about Rhode performing to potential and while they have far more good days than bad ones, there off ones have been frequent enough in recent years to suggest that they can be taken. No manager will be talking about individuals winning games and they are right – you are only as strong as your weakest link and it takes everyone working hard and performing to their best to win a championship.

However, the performance of three outstanding forwards will have a huge bearing on what happens here – Rhode's Niall McNamee and Anton Sullivan and Tullamore's Johnny Moloney. The fact that Rhode have two is a definite advantage but Luke Egan is also capable of having an excellent final for Tullamore. Expect a close contest and if this happens, then Tullamore have a great chance but at the moment, you couldn't put much money against Rhode getting the job done.