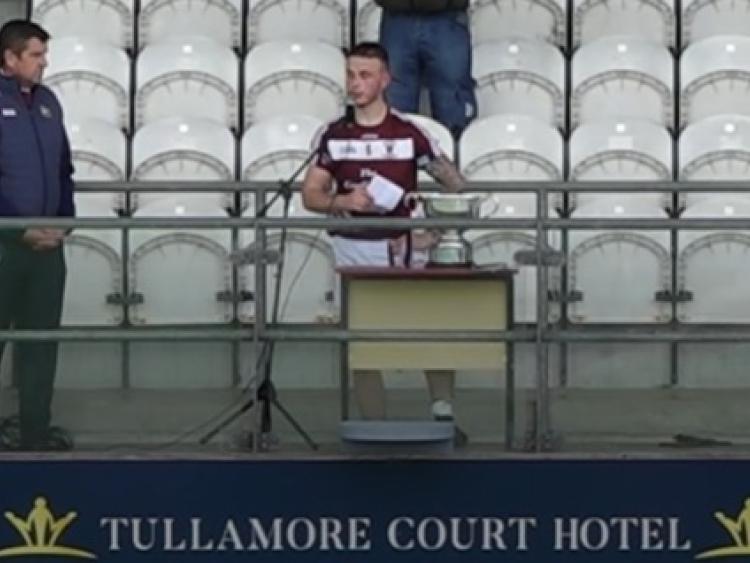 TULLAMORE managed to ask some questions in the second half but there was absolutely no disputing the merit of Daingean's win when they had five points to spare in a keenly contested Junior Football Championship final in Bord na Mona O'Connor Park.

Five points was a fair reflection of Daingean's superiority on a day in which they completely controlled the first half and then finished powerfully after Tullamore had threatened to spoil their victory parade.

The winners laid a powerful foundation with an excellent first half display. With the wind on their backs, they controlled almost every sector of the field and while their cause was simplified by a very error prone and stagnant Tullamore, there was a lot to enthuse about with the way Daingean played.

Playing some very composed and simple football, they took the game to Tullamore and were full value for their 0-8 to 0-2 interval lead. Patrick Cosgrove had given Tullamore an early lead but after this, Daingean really carried the game to them. With David Walsh and Scott Milne building a great platform for them at midfield, they drove at Tullamore relentlessly and their forward line was on song.

Charlie and Jamie Hayes got two points apiece as Daingean swept into a 0-7 to 0-1 lead before Tullamore's next point came from a Shane Kelly free in the 29th minute. Casey Evans' injury time pooint gave Daingean that six point half time lead and the game really should have been over at the break.

The outstanding Jamie Hayes had been wide with a goal chance while a David Walsh shot was saved as Tullamore almost buckled at the knees. Tullamore were surprisingly poor in the first half as they had a couple of bad wides, they had several wayward passes and too many players went backwards or sideways rather than pushing forward.

Tullamore did improve in the second half and almost got back into it as Daingean wilted for twenty minutes or so. They were fortunate that the all important goal had really put them in the driving seat in the 39th minute with impressive wing back Adam Bolger applying a good finish after a great ball in from Jamie Hayes to Odhran Connolly who transferred to Bolger.

That gave Daingean a 1-8 to 0-3 lead but Tullamore played their best football after this. With the veteran Shane Kelly finding the range from frees, they came very strongly at Daaingean. With eight minutes left, Tullamore trailed by 1-9 to 0-9 and all of a sudden, Daingean were vulnerable.

However, it was here that Daingean really showed their quality. They lifted the siege with a terrific work rate all over the field as a 53rd minute free from Shane Tierney eased their nerves. John Kenny, an Offaly hero in the 1990s, came off the bench to kick the final point as Tullamore ran out of steam and Daingean emerged comfortable winners.

While they did struggle for twenty minutes in the second half, it was overall a very good performance by Daingean. Their work rate was spot on and it was a real team performance, though they also had several outstanding individual displays. With another veteran player, Stephen Burns channeling back as an extra defender, their defence was superb with Padraig Ferguson, Ciaran McEvoy and Adam Bolger impressing.

David Walsh and Scott Milne took the midfield honours, although Josh Evans and Patrick Fahey did some very good things and had moments in the driving seat for Tullamore.

Up front, Jamie Hayes was a pivotal figure, taking a couple of sublime points while his passing and vision was instrumental to the Daingean success. Shane Tierney, an Offaly panel member last year, was tightly marked but still contributed verty well to Daingean's win.

It was a very important win for Daingean, who have such a proud tradition but have dropped down the ladder in the past decade plus. They have worked very hard this year and over the course of the campaign, they are very worthy champions.s

For Tullamore, it was a disappointing afternoon. They could have got there but they didn't really perform. They worked hard but lacked creativity, struggling to make and takes scores and they were beaten by a better team. Dean Carroll, Mark Conlon, Jay Sheerin, Patrick Fahey, Shane Kelly and the very hard working Tom Furlong were among their better players but as a unit, it didn't happen for them.