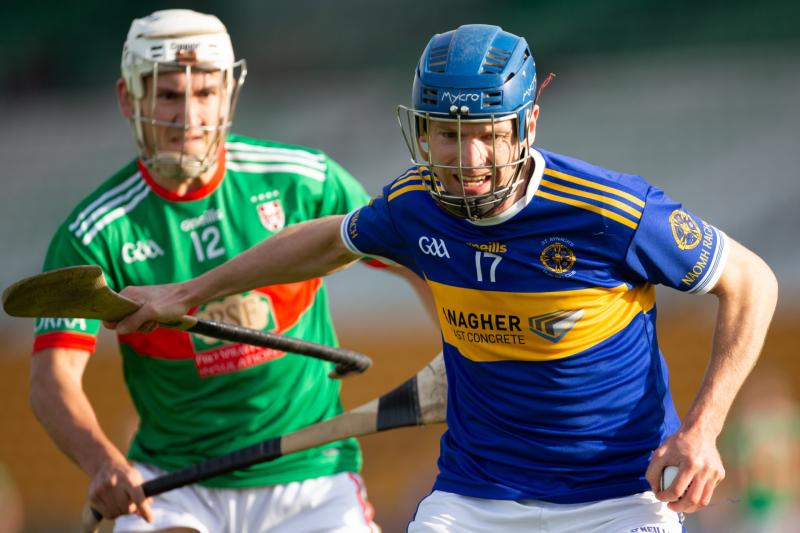 Stephen Wynne getting away from Barry Harding in the SHC semi-final.

WITH uncertainty continuing to cloud GAA schedules all over the country, Offaly GAA will be hoping they can get at least another two weekends without Covid-19 disruption as they bid to bring their club champiuonships to a successful conclusion.

They were shown the fragile nature of things when a series of worrying cases prompted them to call off all underage fixtures from last Tuesday, including U-20 championships until Monday, September 28.

With evenings closing in fast, underage fixtures will resume this Saturday while U-20 games resume tonight with hurling taking place and football fixtures have been made for next Tuesday evening.

The decision to halt underage fixtures came as a couple of clubs reported Covid cases among their players and were having difficulty fielding teams as a result.

There had been controversy last week over an U-20 football fixture involving St Patrick's (Edenderry and Ballyfore) and Na Fianna – that game has now been refixed. A number of the St Patrick's team had been forced to isolate in the wake of a positive test for an Edenderry senior footballer but they had initially conceded a walkover after the Offaly GAA Competitions Control Committee hadn't granted a postponement.

To date, GAA authorities in Offaly have treated Covid cases the same as other illnesses and injuries but there was considerable anger in Edenderry as they were down players on this occasion because they had trained with the infected Edenderry senior footballer the previous week.

That Covid case has placed the Senior Football Championship semi-final between Edenderry and Rhode in doubt – the player had trained with the Edenderry squad the previous Tuesday night and health authorities initially ruled that those players were casual rather than close contacts and they could go about their business as normal.

However, on the Sunday evening, a day after Edenderry had lost in extra time to Rhode, the HSE had contacted the club to state that they now regarded those players as close contacts and they were instructed to isolate and get tested – those tests took place early last week and all have returned negative. However, with nine players on the St Patrick's U-20 panel, they decided they couldn't field a team.

The HSE decision to change contacts at a training session to close had dramatically altered the landscape for Offaly GAA. With a case involving an underage player in Clara and other clubs having players gone for tests or regarded as contacts with positive cases, it looked like things were spiralling out of control early last week and the CCC decided to halt their underage programme for a week. The other U-20 football games were also called off that Tuesday.

The big hurling finals are also decided and will take place on the weeknd of October 10/11. Holders St Rynagh's and Kilcormac/Killoughey will renew rivalry in the Senior Hurling Championship final after hard earned but fully deserved wins over Birr and Belmont in the semi-finals last weekend.

There was a mild surprise in the Senior “B” Hurling Championship when Drumcullen beat Tullamore in the first semi-final last Saturday while Kinnitty, relegated from senior last year, turned in a fine second half display to eliminate Clodiagh Gaels on Sunday. With senior hurling returning to 10 teams next year, both Drumcullen and Kinnitty will be promoted and for Kinnitty in particular, that was their big aim this year.

In the senior “B” relegation play off, Lusmagh played very well as they completed a miserable year for Carrig/Riverstown, putting the Tipperary border side down on a 5-19 to 4-10 scoreline.

There was also a surprise in the Intermediate Hurling Championship on Sunday when Coolderry rallied late to beat a fancied Shamrocks side. They will meet Shinrone in an all south Offaly pairing – Shinrone had a good win over St Rynagh's on Saturday.

Brosna Gaels were relegated from intermediate after a year that never ignited for them – they were beaten in the relegation play off by Birr, 1-14 to 0-8.

A positive Covid case in any of the competing clubs could scupper any of the finals at a moment's notice and there are regular rumours flying about the place about cases but Offaly GAA officials will be hoping they can get a clear run at things for a few weeks.

The big hurling finals and referees were fixed at a meeting of the Competitions Control Committee on Monday night.

The Intermediate Hurling Championship final between Coolderry and Shinrone will be in Birr on Saturday, October 10 at 4.00pm with Shane Guinan refereeing.

O'Connor Park, Tullamore will host the two senior finals on Sunday, October 11 with the Senior “B” Hurling Championship final between Kinnitty and Drumcullen at 1.00pm and the senior showdown with Kilcormac/Killoughey and St Rynagh's at 4.00pm with Adam Kinahan (Clodiagh Gaels) in the middle.

See Midland and Tullamore Tribune this week for a mammoth sports section with previews of this weekend's football finals and reports on all the big hurling games.