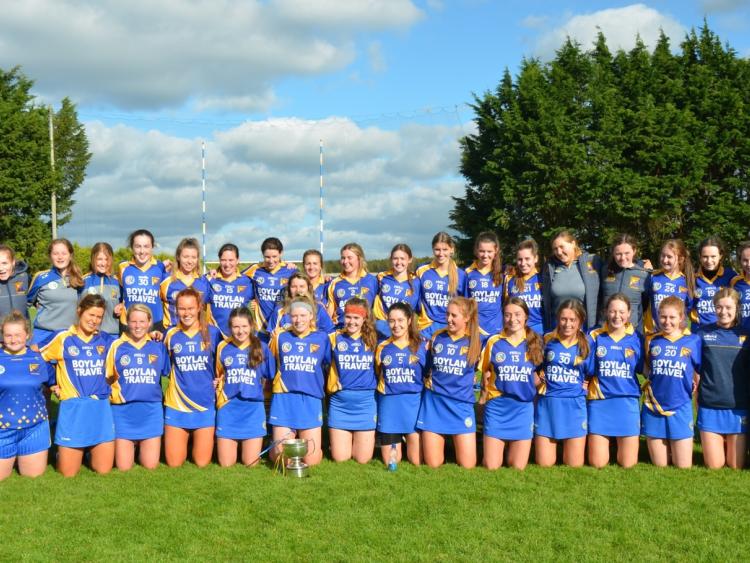 St Rynaghs are Offaly Senior Camogie champions following a four-point victory over Shinrone in Rath on Saturday afternoon. The victory is an historic four in a row for the Rynaghs’ women, who claimed victory following a strong second half performance.

A late Shinrone comeback was almost sensational and despite being 12 points down at one stage during the 2nd half, clawed their way back and made it a three-point game in injury time of the 2nd half. However, they fell just short and will be disappointed with the result as they left their comeback a little too late.

Siobhan Flannery was in sensational form and accounted for 1-9 out of St Rynaghs’ tally, while centre forward Kate Kenny also contributed to 1-4 in a day where their forward line was unmarkable. The movement is exceptional and the system which they played, with two inside full forwards is something which Shinrone struggled to come to terms with for most of this game.

Shinrone showed great resilience and determination to bring themselves back into the game, however their efforts showed up just short and will be bitterly disappointed with the result.

St Rynaghs started the better and raced into a 1-2 to 0-0 lead after just six minutes of play, the goal coming courtesy of Mairead Daly. Grainne Egan settled Shinrone into the game with a free before Michaela Morkan rattled the back of the net after a smart offload from Christine Cleary. St Rynaghs quickly responded with two frees from Siobhan Flannery and a point from Linda Sullivan to push them four ahead with 15 minutes played.

Shinrone pulled themselves back into it scoring four points on the trot to level it at 1-5 apiece 2 minutes in, thanks to two frees from Egan, Michaela Morkan and a wonder score from Orla Maher from a tight angle.

However, the sides were level for a short time, and Kate Kenny pointed on the 22nd minute to leave St Rynaghs one point ahead and they never looked back. Three minutes later, Sinead Hanamy found Kate Kenny who made no mistake in finding the net for Rynaghs’ second goal of the game. Flannery and Egan exchanged frees to leave it 2-7 to 1-6 in St Rynaghs’ favour at half time.

With recent controversy over the Dean Rock free taking prices, spectators were treated to a Flannery free taking class free of charge in the second half. She pointed four frees in a row for Rynaghs between half time and the second water break. Their third goal was also as a result of a Flannery free which dropped into the goals. In 15 minutes of play, she had scored 1-4 from frees to leave the score 3-11 to 2-6 at the second water break.

With the game now looking out of reach for Shinrone, they desperately tried to mount a comeback Michaela Morkan and a Grainne Egan free cut the deficit to 10 before Flannery again restored the 11-point cushion with a free.

Shinrone were handed a lifeline when a Grainne Egan free rifled the ball past five Rynaghs players on the goal line. Michaela Morkan quickly pointed straight after before Christine Cleary somehow managed to bundle the ball past the net amongst a crowd of players to leave it a six-point game. The drama was not over just yet. Caitlin O’Meara flicked the ball past Louise Flannery in the St Rynaghs net to leave it a three-point game with just one minute of normal time left.

With all momentum swinging Shinrone’s way and Flannery missing a rare free, Rynagh’s looked to be in trouble. However, Mairead Daly showed all her experience and class as she rose highest to catch an Emer Reynolds puck out. She offloaded to Kate Kenny who split the posts to ensure the cup came back to Rynaghs’ for another year on the mantelpiece.